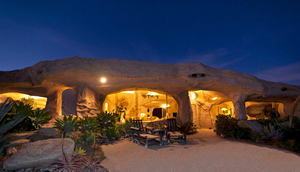 The Flintstones home in Malibu owned by Dick Clark and wife, Kari

A whimsical house in Malibu that looks like something out of "The Flintstones" has come on the market at $3.5 million. The owners are iconic television personality Dick Clark and his wife, Kari, according to public records.

The unusual architectural retreat sits on a mountaintop on a nearly 23-acre site zoned for equestrian use. Free-form walls punctuated with expanses of glass bring in ocean views. 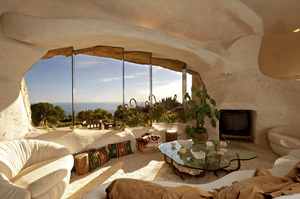 The custom-built one-bedroom, two-bathroom house, which has an interior ambience that brings to mind Fred and Wilma's place in Bedrock, features vaulted ceilings in the living and dining rooms, a bar, a fireplace and a wine cellar.

Public records show that the Clarks own other property in the area. 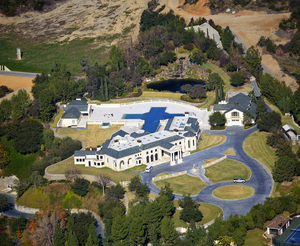 An asking price of $78.8 million will make a splash in any neighborhood. And the fact that this one includes a temperature-controlled trout pond with a two-story waterfall doesn't hurt.

Donald Abbey, founder of a commercial real estate investment and management firm bearing his name, has listed a recently completed estate in Bradbury in the San Gabriel Valley.

More than nine years in the making, the Palladian-style compound occupies an 8-acre promontory with city and ocean views. The more than 32,000-square-foot main house features vaulted 40-foot-high ceilings, domes with hand-painted frescoes and a two-story library. There are seven bedrooms, 10 bathrooms, six fireplaces, a 2,000-bottle wine cellar and a 10-car garage.

The grounds contain a subterranean firing range, an infinity pool with a pool house, a 15-person spa and a guesthouse. A hand-fitted and hand-cut rock wall that follows the 600-foot driveway and extends along the front of the property took three workers eight years to build. The pond, stocked with rainbow trout, has a pumping and cooling system to maintain a constant temperature of 57 degrees.

The custom-built house, constructed in 2007, is a cross between a Spanish hacienda and a Tuscan villa. Nearly 8,000 square feet of living space includes a sweeping staircase, projection room, bar, wine cellar, six bedrooms and seven bathrooms. The more than a third of an acre of grounds feature a built-in stone barbecue, patios, lawn, a cabana and a pool and spa with two waterfalls. A pool view pop-up television screen rotates 360 degrees.

Public records show the property was purchased in 2009 for $2.6 million.

Braxton-Herbert, 34, has starred since last year on "Braxton Family Values." She is a founding member of the girl group the Braxtons, which included her older sister, the Grammy-winning Toni Braxton.

A Southern Colonial in Hancock Park that just came on the market at $5.295 million was a set location for the 1994 film "Clear and Present Danger."

The movie opens with a breakfast scene in the kitchen of the six-bedroom, 6½-bathroom main house, which sits on an expanse of lawn and features a plantation-style veranda and two-story columns along the front. There is also a separate guesthouse, a swimming pool, a pool house with a kitchen and a tennis court.

In another scene, Ford is preparing to leave town and was filmed packing the homeowners' actual clothes. The suitcase ended up in a prop truck, and the owners later had to retrieve their belongings from the prop department, according to the listing agent.

Filming took place over 10 days. Ford reportedly loved the house and offered to buy it. The owners, who purchased the property in the 1980s, weren't ready to part with it then.


Moving Out of His Twilight Zone

Writer-producer-director Pen Densham has sold his house in the Windsor Square area of Los Angeles for $2.75 million.

The English Manor-style home, built in 1906, was moved to its current location from Wilshire Boulevard and Vermont Avenue by the Bullock family -- think department store -- earning it the name Bullock House.

The house has an oversized entry with beamed ceilings that leads to the living room, library, formal dining room and carved-wood staircase. There are eight bedrooms, 7 ½ bathrooms and a basement.

The more than half-acre site includes a guesthouse and a swimming pool.