(LOS ANGELES, CA) -- Moby, as DJ and singer-songwriter Richard Melville Hall is known, has purchased Wolf's Lair, a Hollywood Hills castle-like fortress with views of the Hollywood sign, downtown and the ocean, for $3,925,000.

The sellers are Lionsgate Entertainment's Jay Faires and Debbie Matenopoulos, former co-host of "The View" (1997-99).

Wolf's Lair was built in 1927 by Hollywoodland developer L. Milton Wolf. Moby, who will be moving from the East Coast, plans to restore the walled and gated property in keeping with its period charm. Details include coffered ceilings, carved and stenciled beams, linenfold paneling, turrets and gable windows. 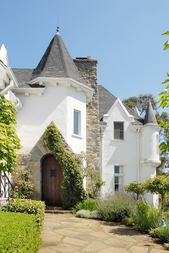 The main house, John Lautner-designed guesthouse and pool house apartment have a total of eight bedrooms and 5 1/2 bathrooms in about 6,500 square feet of living space. Moby's new kitchen has all the requisite appliances. He is known to whip up a smoothie and be passionate about his pancakes.

The structures sit on 3.3 acres above Lake Hollywood. The black-bottom swimming pool is shaped like a heart, and the pool terrace has a pergola-covered seating area.

Moby, 44, has seen his 1999 electronica album, "Play," go multi-platinum, selling more than 10 million copies worldwide. He maintains a studio and apartment in New York City, where he recorded his 2009 album, "Wait for Me."

Faires, 47, is president of music at Lionsgate and founder of Mammoth Records. The buyer and sellers are acquainted as Moby has recorded in the home's living room. Faires has worked with recording stars including Mary J. Blige ("Precious," 2009) and U2 ("Brother," 2009).

Real estate agent Ernie Carswell continues to receive inquiries from around the world about the home, which looks like something out of a fairy tale. "I've never had a property in any price range that had such a life after it sold," Carswell said.

No More Day at The Beach?

The two-story house, built in 1936, features bay windows and a fireplace in the living room, a balcony off the master bedroom and an upgraded kitchen with a wine refrigerator and Viking and Wolf stainless-steel appliances. The house has three bedrooms and two bathrooms; there is also a one-bedroom, one-bathroom guesthouse, which has a kitchen and laundry facility. Together, the homes have a total of about 2,100 square feet of living space.

A Connecticut farmhouse-style home designed by Roland Coate for Academy Award-winning director William A. Wellman has come on the market in Brentwood at $10 million.

Reached by a long driveway instead of a country lane, the two-story house sits on 3 acres of meadows and woods with a pool, a pool house, a putting green, a horse corral and walking paths. Wellman created the compound in 1942 for his large family. The pool house, with a soda fountain and room for a billiard table, was the scene of parties and family gatherings.

Recalling life during Hollywood's Golden Age, the main house has a living room with a beamed ceiling, a curved window seat and a stone fireplace; formal and junior dining rooms; a paneled library and office; a sewing room; a guest suite, and two staff rooms. There are seven bedrooms, 9 1/2 bathrooms and 6,295 square feet of living space.