(LOS ANGELES, CA) -- TV producer Nigel Lythgoe has seen some pretty good moves as a judge on "So You Think You Can Dance." Now he has made one of his own.

He listed his Hollywood Hills home at $2,649,000 earlier this year and was in escrow within a month. The sale recently closed for $2.3 million.

The contemporary Mediterranean, built in 1972, has a 20-foot living room ceiling and two master bedroom suites with balconies and canyon and city views. There are five bedrooms and five bathrooms in about 4,000 square feet. A one-bedroom, one-bathroom guesthouse overlooks a swimming pool with a waterfall.

Property records show he purchased the two-story house in 2003 for $1.4 million.

Grammy-winning musician Ziggy Marley has bought a Los Angeles home in the Beverly Center area for more than $700,000.

Mature trees shade the Spanish-style house, which was built in 1929 and described in the Multiple Listing Services as a fixer. Details include high ceilings, a living room fireplace and hardwood floors. The 1,600-square-foot house has three bedrooms and two bathrooms. Fruit trees fill the backyard.

Marley, 41, is the eldest son of the late legendary Jamaican reggae artist Bob Marley. Ziggy Marley, like his father, also a singer-songwriter-guitarist, won a Grammy for best reggae album with "Love Is My Religion" (2006), his second solo album. 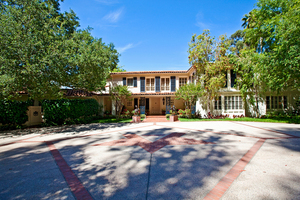 The Gene Autry estate, built in 1949 in Studio City, Calif., by the cowboy singer-actor, has come on the market at $6.9 million.

Owned by his widow, Jacqueline Autry, the forested property's 3.5-plus acres center on a two-story Spanish-style house of about 8,000 square feet. The main house has pegged hardwood floors, a family room with a wet bar, a library/media room with vintage walnut paneling, a breakfast room, five bedrooms and seven bathrooms.

Balconies overlook the acreage, which has winding paths and flower gardens. There is a guesthouse, a swimming pool and an outdoor entertainment area with a fireplace.

The furnishings may be purchased for an additional $200,000.

Gene Autry's signature song was "Back in the Saddle Again," but his biggest hit was "Rudolph the Red-Nosed Reindeer." He died in 1998 at age 91.

The Autrys, who married in 1981, owned the team now known as the Los Angeles Angels of Anaheim from 1961 to 1997. Jackie Autry, 68, has retained the honorary position of president of Major League Baseball's American League since 1999.


Zapping Out of Hollywood Hills

Musician and actor Ahmet Zappa has listed his Hollywood Hills contemporary for $1,165,000. The one-story house, with mountain, valley and Hollywood sign views, has a courtyard entry leading to the foyer and main living area. The open-plan design incorporates the living room, dining and kitchen, which has maple floors and stainless-steel appliances. There are two bedrooms, two bathrooms and 1,468 square feet of living space.

Zappa, 36, is the son of legendary rock guitarist Frank Zappa, with whom he wrote the song "Frogs With Dirty Little Lips." He has worked with his brother Dweezil Zappa on several albums. He will be an executive producer for "Fraggle Rock: The Movie," based on Jim Henson's 1980s TV show. It is scheduled for 2012 released.

The Santa Monica home of the late film star Jean Simmons has come on the market for the first time in more than 30 years at $3,895,000.

The Southern Colonial-style house, built in 1950, opens to a swimming pool with a brick surround and a guesthouse, which could be used as a home office. In the main house, the master bedroom has beamed ceilings and a fireplace. There is a sky-lighted bathroom and a sauna. The 3,102 square feet of living space include a formal dining room, a den, an eat-in kitchen, four bedrooms and 4 { bathrooms.
Simmons, who died in January at age 80, starred in scores of films such as "Spartacus" (1960), "The Happy Ending" (1969) and "Hamlet" (1948). She received an Emmy for her supporting role in the miniseries "The Thorn Birds" (1983). Simmons most recently starred in the film "Shadows in the Sun" (2009).