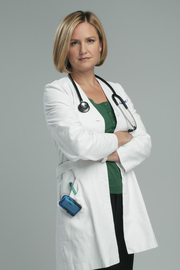 (LOS ANGELES, CA) -- Perhaps Sherry Stringfield got used to moving quickly playing a doctor in the fast-paced emergency room. The "ER" actress received multiple offers and sold her Beverly Hills home in a month for close to its $2,895,000 asking price.

The Spanish-style home, built in 1928, has been updated yet maintains its period charm. The two-story house has a center hall, formal dining and living rooms, a family room, a study, an office, six bedrooms and three bathrooms in about 3,600 square feet.

Stringfield, 42, played Dr. Susan Lewis from 1994-96 and from 2001 to until the show ended in 2009. The 15-year drama won fans and churned stomachs with its sometimes-gory scenes and camerawork that made viewers duck.

THE EXPEDITION WILL MOVE ON OUT

Actress Missi Pyle and her husband, grizzly bear expert and naturalist Casey Anderson, have listed their Beachwood Canyon home for sale at $669,000.

The 1926 bungalow sits in the hills below the Hollywood sign. It has an open-plan dining and living room, a wood-burning fireplace, two bedrooms and one bathroom. In addition to the 880 square feet of interior living space, there are outdoor living and dining rooms, a spa and gardens with fruit trees and wisteria.

Pyle appeared on "Grey's Anatomy" this year and is shooting a pilot, "How to Be a Better American," for ABC. Her film credits include "Charlie and the Chocolate Factory" (2005) and "Dodgeball: A True Underdog Story" (2004).

Anderson hosts "Expedition Grizzly" (2009-present) on the National Geographic Channel. Brutus, an 800-pound bear that the conservationist has cared for since it was a cub, was a guest at the couple's wedding in 2008. They split their time between L.A. and property they own in Montana, where Brutus lives on a sanctuary.

The couple recently sought guidance in training their two rescue dogs and will appear on "Dog Whisperer With Cesar Millan."

The 1936 traditional two-story house has four bedrooms and five bathrooms. It sits on about a third of an acre. LaNasa, who runs and owns Casa LaNasa, did the remodel and interior design.

Former Los Angeles Dodger pitcher Scott Erickson and his wife, broadcaster and actress Lisa Guerrero, have listed an ocean-view home in Malibu for $6,999,000.

The gated Mediterranean sits on 1.3 acres with a circular driveway, an outdoor covered patio and entertaining area, a swimming pool and an expansive lawn. Inside, walls of glass reveal panoramic views. The house, built in 1998, has seven bedrooms and 6 1/2 bathrooms in 9,331 square feet.

Erickson, 42, started his major league career with the Minnesota Twins in 1990. He played for the Dodgers in 2005, and made his last major league appearance in 2006 with the New York Yankees.

The Hollywood Hills home built for actress Beverly Garland is on the market at $1,765,000.

Designed by midcentury architect Richard Dorman and constructed by Garland's husband, Fillmore Crank, in 1959, the compound consists of the main house, a detached guesthouse and a detached workshop for a total of four bedrooms and 4 1/2 bathrooms in 3,660 square feet. The third of an acre includes a saline swimming pool. Garland and Crank were the sole owners of the house, where she lived until her death in 2008 at 82.