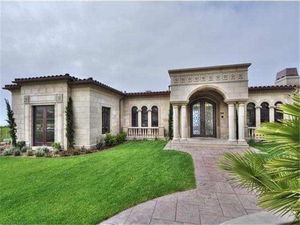 Donald Trump  has an estate in Rancho Palos Verdes for sale at $12 million, making it the most expensive listing on the market in the coastal community.

Located at Trump National Golf Course, which he owns and operates, the 11,000-square-foot Mediterranean mansion has a great-room entry, a 1,000-square-foot kitchen, marble flooring and wall-to-ceiling sliding doors that disappear from view.

Trump, whose main residence is in New York, said he splits his time in Los Angeles between his home in Beverly Hills and Rancho Palos Verdes, "where the job is."

He has built six houses at the golf course, which has lots for 75.

"This is one of the best locations with a direct view of the Pacific Ocean and views from three sides of the house," he said. "There's very little obstruction."

The five-bedroom, nine-bathroom home has a game room with a bar that is a replica of the one at the course restaurant. "It has a spectacular basement with light and air," Trump said. A wine room is enclosed behind glass, and the master bedroom has a patio and fire pit.

The U-shaped mansion, designed by Luis de Moraes of Envirotechno Architecture, has an infinity pool in the courtyard.

Trump, 64, is chairman and chief executive of his own real estate development company; founder of Trump Entertainment Resorts; and star and producer of "The Apprentice" (2004 to present) on which contestants vie for a chance to work for him. This season's contestant pool is made up of the recently unemployed.

The business magnate will be the subject of CNBC Titans: Donald Trump on Wednesday night.

Los Angeles Dodgers shortstop Rafael Furcal is trying to sell his home on a golf course in La Canada Flintridge for $4,449,000, the Multiple Listing Service shows.

The contemporary Mediterranean, built in 2000, has a two-story entry, marble and limestone floors, a study, a media room, a wine tasting room and a billiards/game room. The grounds include a swimming pool with spa, an outdoor kitchen and a built-in barbecue. Six bedrooms and nine bathrooms are in about 7,400 square feet of living space.

Furcal, 33, started his major league career with the Atlanta Braves in 2000 and signed with the Dodgers in 2005. Sidelined by injuries, he played in only 97 games this season.

Public records indicate that Furcal bought the property in 2007 for $4.25 million.

Dee Crawford of Keller Williams Realty, Beverly Hills, is the listing agent, according to the MLS.


Of Course, It Has an Art Studio 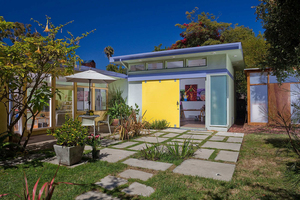 The 1,857-square-foot house is one of the largest in a development of 52 so-called "Modernique Homes," which strove to combine good design and low cost. Conal and Ross were both interested in the Ain homes before they met in 1987.

"They were designed with a romantically progressive ideal of everyday social interaction, including contiguous -- shared -- lawns," Conal said.

The couple increased the size and improved the function of the house while retaining such original details as the sliding room dividers, clerestory windows and floor-to-ceiling windows.

Houses in the tract follow variations of similar footprints and can be configured to suit the owners' needs.

"The thing I love most about the floor plan is that it is completely laid out for 'Mom,'" Conal said, calling it "a true matriarchal design -- in 1948." The kitchen is in the front of the house with the sink looking out the front window. "Mom can see anyone approaching the house, as well as the kids, if they happen to be playing out front."

The pair added bamboo flooring, a new kitchen and an art studio. The house has three bedrooms and two bathrooms.

"Each bedroom has built-in closets and dressers," Conal said. "It's almost designed like a boat for efficiency of usable space."

Conal is known for his depictions of political figures and guerrilla street posters that blanketed cities overnight. He has a painting in the Museum of Contemporary Art's "The Artists' Museum," which opened Oct. 31.

Scott King and Brian Linder of Deasy, Penner & Partners have the listing.


Rocker Rolls Out of the Valley

Richard Fortus, rhythm and lead guitarist for the rock band Guns N' Roses, has placed his Woodland Hills house on the market at $549,000.

The single-story contemporary has an open floor plan and cherry plank flooring. The kitchen features granite countertops and new stainless-steel appliances. There are three bedrooms, 1 3/4 bathrooms and 1,500 square feet of living space.

A swimming pool, a covered patio, a barbecue and an outdoor living room with a built-in kitchen complete the grounds.

Fortus, 43, joined Guns N' Roses in 2001. He tours with the band and played on the album "Chinese Democracy." He also has played with the Psychedelic Furs, recorded film scores and toured with artists such as Enrique Iglesias and Rihanna.

Update: A Brentwood home designed by Roland Coate for Academy Award-winning director William A. Wellman has sold for $7.5 million. The Connecticut farmhouse-style compound had come on the market in February at $10 million.

Reached by a long driveway that created the feel of a country lane, the two-story house sits on 3 acres of meadows and woods with a pool, a pool house, a putting green, a horse corral and walking paths. The compound, built in 1942, was the scene of parties and family gatherings. There are seven bedrooms and 9 1/2 bathrooms in 6,295 square feet of living space.