The Carl Maston-designed Midcentury Modern was built in 1947 and restored. Wood-framed glass walls open to a swimming pool, lawn and outdoor entertaining space, which includes a barbecue and fire pit. The 3,210-square-foot gated house has a library-office, an eat-in kitchen, three bedrooms and three bathrooms.

Public records show he purchased the property in 2001 for $2.5 million.


A Neutra Goes on the Market 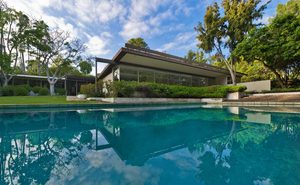 The Richard Neutra-designed Kronish house in Beverly Hills has come on the market for the first time in more than 30 years at $13,995,000.

Named for its original owner, Herbert Kronish, and built in 1954, the one-story house sits at the end of a 250-foot-long driveway on a 2-acre lot. With 6,891 square feet of living space, six bedrooms and 5 1/2 bathrooms, the contemporary home is the Modernist architect's largest in Southern California, according to his son, Dion Neutra. Walls of glass open to a terrace that steps down to the pool.

Neutra, considered one of the most influential Midcentury architects, died in 1970 at 78.


Making Tracks Out of Bel-Air?

Singer and record producer John Feldmann has listed his Bel-Air-area house for sale for close to $2.8 million.

The contemporary Mediterranean, built in 2002, features iron front doors, a marble entry and an open floor plan of 4,700 square feet. A recording studio in the home has a live room, two control rooms and a vocal booth. Including a master suite with a private patio, there are five bedrooms and six bathrooms. At more than a third of an acre, the grounds include a saltwater pool with spa and a remote-controlled waterfall.

Feldmann, 43, is the lead singer and guitarist for Goldfinger. He scouts talent and oversees the development of recording artists as an A&R executive at Warner Bros. Records and has worked as a producer for Hilary Duff and Ashlee Simpson, among others.


A Retreat for Gossip Columnist

A Northridge home originally built as a ranch and retreat by renowned Hollywood gossip columnist Louella Parsons has come on the market at $798,500.

The two-story French Colonial, part of a 28-acre farm when it was constructed in 1937, sits on slightly more than half an acre today. A sun porch-family room looks out on the backyard lawn, rose garden and swimming pool.

The four-bedroom, 3 1/2-bathroom main house has built-in cabinetry in the dining room, a wet bar opening to a den, a kitchen breakfast area and a butler's pantry. One of the two master suites has a fireplace. The guest quarters have a separate entrance and another bathroom for a total of 4,465 square feet of living space.

Parsons, who died in 1972 at 91, started out writing social notes and then a film column. After a bout with tuberculosis in the mid-1920s, she moved to Los Angeles and became a syndicated columnist for William Randolph Hearst. "She held an undisputed position of power in the motion picture industry for 40 years," according to Times archives, opening "the doors on the private lives of movie people, reporting their scandals, romances, feuds and break-ups."