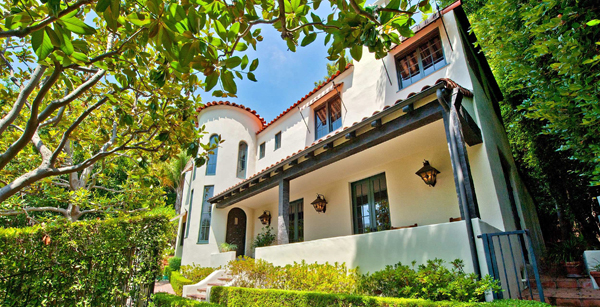 
Actor Harrison Ford has listed his compound in Brentwood for $8.295 million.

The Colonial Revival-style house, designed by Gerard Colcord and built in 1951, is set off the street at the end of a long gated driveway. On more than three-quarters of an acre with mature trees and three detached guest suites, the two-story main house has been restored and remodeled in keeping with the original design.

"It was a one-story Colcord country Colonial," said Bret Parsons, author of the book "Colcord Home." The architect was hired by Ford to add the second story. After Colcord died in 1984, his assistant Liza Kent completed the project.

"Ford would fly down in his plane to pick her up after she moved to San Diego," Parsons said.

The actor would later quote Kent in interviews. "No limit for better," uttered in her thick German accent, became one of his mottoes, according to Parsons' book.

The home's features include paneled walls, four fireplaces, extensive built-ins and a bomb shelter. There is a swimming pool and a detached workshop where Ford does carpentry work. Ford made the mantel in the dining room, according to Parsons.

When Parsons toured the house in 2007 while working on the book, his visit was carefully orchestrated by the amiable actor. "Don't visit it on your own," Ford warned. "There are attack dogs."

Ford, 69, gained fame in the late 1970s and the '80s for his role as Han Solo in the original "Star Wars" trilogy. He also starred as adventurer Indiana Jones in that film series. A fifth installment is reportedly in the works.

Last year Ford starred in "Cowboys & Aliens." His coming movie "42," about baseball's Jackie Robinson, will be released in 2013.

Public records show that the actor bought the property in 1983 for $1 million. This is Ford's second Colcord-designed house.

David Offer of Prudential California Realty in Brentwood is the listing agent.

Actress and historic home renovator Diane Keaton has listed a live-work townhouse in downtown Los Angeles for lease at $2,800 a month. She recently bought the condominium for $570,000.

Keaton, 66, stars in "Darling Companion," due out this month. She won an Oscar for her leading role in the 1977 film "Annie Hall." In addition to her active interest in house restoration, she co-wrote "California Romantica" and is working on another architecture book for Rizzoli.

Aileen Comora and Paul Lester of the Agency are the listing agents on the lease, and Comora represented Keaton in the purchase. Wayne A. Willbur and Jason Kitchens of Deasy Penner & Partners had the for-sale listing, according to the Multiple Listing Service.

Former UCLA Bruins head football coach Rick Neuheisel has sold his house in Bel-Air for its list price of $4.995 million.

Neuheisel, 51, was UCLA football coach from 2008 to 2011. The Bruins won the first Pac-12 South Division title last year, but Neuheisel was fired after the season. 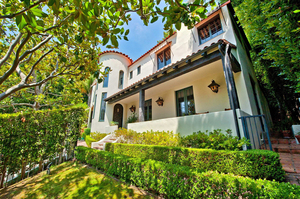 Talk show host Craig Kilborn has parted with his house in the Hollywood Hills West area for $2.9 million.

The Spanish-style home, built in 1927, was owned by actor Dennis Hopper when he was working on the film "Easy Rider" in the late 1960s.

Entered through a turret foyer, the three-bedroom, three-bathroom house features arched windows and doorways, Malibu tile stair risers and original sconces. There are terraced gardens and a swimming pool.

Hopper, who died in 2010 at 74, used the address of the house as a title for a book of his photography.

Aileen Comora and Paul Lester of the Agency were the listing agents. Stephen Sigoloff represented the buyer.

The Rancho Mirage estate of the late President Gerald Ford and Betty Ford has been sold for $1.675 million.

The buyers are entertainment business manager John McIlwee and DreamWorks Animation executive Bill Damaschke, who announced their intentions to preserve the 6,316-square-foot midcentury home. They purchased the furniture, including sofas and desks, and some of the artwork separately.

The Fords built the Welton Becket-designed home in 1979. The gated compound encompasses 1.37 acres.

The main residence has a swimming pool and includes a staff waiting room, his and her offices, five bedrooms, five full bathrooms and two partial bathrooms.

The Fords used the compound as their California retreat after they left the White House. President Ford died in 2006 at 93. Betty Ford died last year, also at 93.

Home builder and real estate investor Richard Lewis and his wife, Rebecca, have bought a unit in the Beverly West Residences for $5 million.

Lewis, president of Lewis Homes, has been with the Lewis Group of Cos. since 1965.

The property came on the market in April at $7.767million.

Joy Denton and Jeffrey Hobgood of Sotheby's were the listing agents. Adrian Grant of John Aaroe Group represented the Lewises.