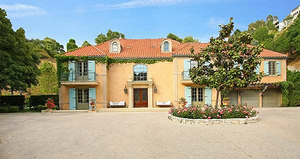 "Project Runway" host and executive producer Heidi Klum and her husband, singer-songwriter Seal, have sold their Beverly Hills Post Office-area estate in an all-cash deal for $7 million. Listed at $6.9 million, the property received multiple offers and closed after a 23-day escrow.

The house, more than 9,000 square feet, sits behind gates on more than 4 acres with a tennis court and swimming pool. Features include a glass-enclosed wine vault in the dining room and a wood-paneled library. There are six bedrooms and 9 1/2 bathrooms.

Klum, 39, also has been a star and executive producer of the TV series "Seriously Funny Kids" (2011) and "Models of the Runway" (2009-10). The ninth season of "Project Runway" begins later this month.

Seal, 48, won three of his four Grammys for his hit "Kiss From a Rose," from the soundtrack to "Batman Forever" (1995). He shared his fourth this year in the pop collaboration with vocals category for "Imagine."

Public records show the property was bought in 2005 for $7.6 million.

The 1926 English country-style house is gated and sits behind tall hedges. The residence features French doors and high ceilings, according to Realtor.com.

The property, which includes a detached guest studio, has three bedrooms and three bathrooms in nearly 1,300 square feet.

Public records show Krasinski bought the property in 2006 for $1.05 million. He and Blunt were married in 2010. They own another house in the Los Angeles area.


Seeking a New Place to Park?

"Parks and Recreation" co-creator Michael Schur and his wife, Jennifer Philbin, have put their Hancock Park house on the market at $1,749,000.

The Spanish-style house, built in 2007, has an old world ambience that belies its features, which include prewiring for media, built-in speakers, automated lighting and a remote-controlled pool system. The 3,604-square-foot house has five bedrooms and five bathrooms in two stories. The gated lot has a backyard pool with spa.


Luxe Home Had Fit Him t a Tee

Self-made billionaire Phillip G. Ruffin has listed his ocean-view home at the Estates at Trump National in Rancho Palos Verdes at $10 million.

The 7,669-square-foot home is being sold fully furnished and features a library office, a screening room, six bedrooms and eight bathrooms. A lanai with fireplace and outdoor kitchen, a lagoon pool and a spa are among exterior amenities.

Ruffin, a business partner of Donald Trump, made his fortune buying and selling hotels, casinos and other commercial properties.

Public records show the property was bought in 2006 for $12.5 million.

Linda d'Ambrosi and Sandra Callen of the Smart Team of Keller Williams Realty are the listing agents.

Update: A Bel-Air compound owned by the late real estate broker Jon Douglas has sold for $11.4 million. It had been listed at $18.7 million when it first came on the market in October.

The nearly 2-acre gated property includes an 11,700-square-foot main house and a 1,750-square-foot guesthouse. The seven-bedroom, eight-bathroom main house, built in 2001, features a grand circular entry hall, a wood-paneled library, a gym and a master suite. The guesthouse has two bedrooms and 21/2 bathrooms.

Douglas died in August at 73. His Westside brokerage, the Jon Douglas Co., merged with Prudential in 1995 and was one of the largest in the country. It had 70 offices when it was bought in 1997 by Coldwell Banker, according to Times archives.