Adieu to a $40 Million Beauty 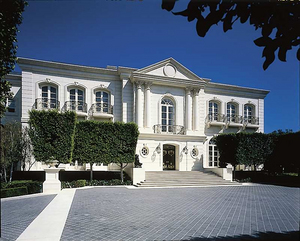 (LOS ANGELES, CA) -- La Belle Vie, the mammoth Bel-Air residence built in 1993 for philanthropist Iris Cantor by her husband, Bernard Gerald Cantor, has sold for $40 million, public records show. The sale is one of the highest this year in Los Angeles County.

The mansion had been marketed at $53 million since 2009. It was designed to house the Cantors' extensive art collections.

The 35,000 square feet of living space include a three-story entry hall, a formal library, a media room, a gym, a billiards room, a beauty salon, three kitchens, 12 fireplaces, nine bedrooms, 21 bathrooms and a staff wing. The property includes a pool, a tennis court and a 10-car garage.

Iris Cantor is chairwoman and president of the Iris and B. Gerald Cantor Foundation, which supports the visual arts and medical, educational and cultural institutions. B. Gerald Cantor, who died in 1996 at 79, cofounded the securities firm Cantor Fitzgerald.

Singer-songwriter Avril Lavigne, who has been sporting emerald highlights in her hair, may soon see another kind of green. She has listed her home in a gated Bel-Air community for $9.5 million.

The Mediterranean-style house, built in 2003, has a two-story foyer, a wine cellar and tasting room, a gym, eight bedrooms and 101/2 bathrooms within its 12,184 square feet. The garage can park 10 cars.

Lavigne, 26, has been touring to promote her latest studio album, "Goodbye Lullaby," which was released earlier this year, and is working on her fifth album. Her debut album, "Let Go," was released in 2002.

She and her then-husband, Sum 41 singer-guitarist Deryck Whibley, bought the house in 2007 for its current asking price.


Comic Tests His Timing in Malibu

The three-bedroom 1929 Craftsman-style house sits on nearly an acre on a bluff above the beach. The master suite has stained-glass windows. A three-bedroom guesthouse includes a detached music room.


Done Playing Host at These Digs

Actor Dan Cortese and his wife, DeeDee, have listed their Malibu house for sale at $3.25 million.

The Mediterranean-style home, built in 1997, sits in a gated community on more than three-quarters of an acre. The 6,322-square-foot house has a sweeping staircase entry, five bedrooms and six bathrooms.


Lots of Character in Studio City

The Studio City estate of the late Joseph Barbera, co-founder of Hanna Barbera Studios, and his wife, Sheila, is listed at $6,795,000.

Set on 2 acres in Fryman Estates and built in 1988, the main residence has floor-to-ceiling stone fireplaces in the living and family rooms and a formal dining room large enough to seat 16. The property has five bedrooms and 6 1/2 bathrooms in the 6,899 square feet.

The garage of 7,200 square feet houses a replica of Barbera's office at Hanna Barbera.

Sheila Barbera will be making her primary residence at her Old Las Palmas estate in Palm Springs.


A Close For "Closer" Star

The two-story home, built in 2000, sits on more than half an acre. It has five bedrooms and five bathrooms in about 4,190 square feet.

Simmons, 56, who played hard-boiled editor J. Jonah Jameson in the "Spider-Man" movies, will reprise the role in the upcoming "Ultimate Spider-Man" television series. He costarred as an assistant police chief on "The Closer" (2005-11) and was a police psychiatrist on "Law & Order" (1997-2004).