Actress Jane Seymour and her husband, director-producer James Keach, have listed a house in Sherman Oaks, Calif., for sale at $2,195,000 or for one-year lease at $5,900 a month.

The traditional home was built in 1960 for Keach's parents -- character actor, director and producer Stacy Keach Sr. and his wife, Mary, who both died in 2003.

This is not the first time the pair has played landlords. The family home was put on the market for the first time in 2005. Then it was listed at $2.6 million to buy or $7,900 a month to lease.

The gated house and detached guesthouse in the upscale community of Longridge Estates contain four bedrooms and four bathrooms in 3,320 square feet of living space.


No Longer in Charge in Encino 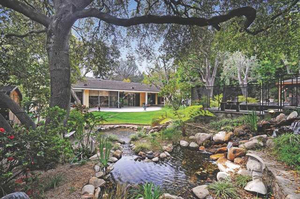 The grounds include a gazebo with a home theater, a koi pond, a swimming pool with a hot tub and a lighted tennis court on more than an acre.


Lots of Character in Silver Lake

Actor Tom Bresnahan and his wife, Elizabeth French, have listed a Paul Williams-designed home in Silver Lake, Calif., for $2,287,000. 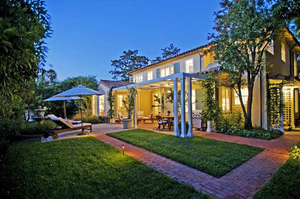 The 1935 Monterey Colonial, called the Rene Faron residence for its original owner, is on a knoll with lake, canyon, city and mountain views. An oversized motor court and landscaped grounds surround the restored house, which has formal living and dining rooms, a library, a wine cellar, an eat-in kitchen, four bedrooms and 3 1/2 bathrooms in more than 3,200 square feet of living space.

The prolific Williams was known as an "architect to the stars." He designed homes for entertainer Frank Sinatra and actress Lucille Ball, among others, and worked on such L.A. landmarks as the flying saucer-like Theme Building at Los Angeles International Airport.

Outfielder Juan Pierre, who was traded by the Dodgers to the Chicago White Sox earlier this season, has sold his 17th-floor condo in Marina del Rey, Calif., for $1,125,000.

The 1,900-square-foot remodeled unit has views of the marina, Malibu, the Hollywood Hills and downtown L.A.

There are two bedrooms, 2 1/2 bathrooms and a 500-square-foot terrace. The condo is in the Azzurra, which has a pool, a gym, a 24-hour doorman and a rooftop spa and party deck.

Update: When investment banker William J. Chadwick listed his Carbon Beach, Calif., house at $65 million two years ago, it made a wave in Malibu.

The 10,500-square-foot house, on a rarefied stretch of sand known as Billionaires' Beach, is back at a more modest $35 million. That's more in keeping with at least one comp: the June sale of apparel executive Charles Perez's 5,800-square-foot house down the row to Microsoft co-founder Paul Allen for $25 million.

Chadwick's property has 150 feet of beachfront and a 75-foot beachfront pool. The Cape Cod-inspired house has a 16-seat home theater, an aquarium that fills one wall, a pub, a gym, a wine cellar, six bedrooms and nine bathrooms.

Chris Cortazzo of Coldwell Banker, Malibu West, has the listing.