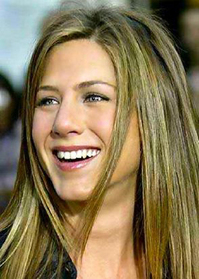 (LOS ANGELES, CA) -- Designed by Hal Levitt, the 1970 house sits on about an acre in the Trousdale Estates area. The indoor-outdoor home of glass, wood and stone was designed for entertaining and for use by an extended family.

The redesigned and expanded interior living space, restored by Jennifer Aniston and designer Stephen Shadley over more than two years, encompasses nearly 10,000 square feet. The formal living room is paneled in rosewood, a secondary living room has a wet bar, and the five bedrooms and 71/2 bathrooms are complemented by two kitchens, a gym and a three-car garage.

Water features include a swimming pool, spa, ponds and fountains throughout the property. An alfresco living room, fireplaces and another kitchen are among the outdoor amenities.

In an Architectural Digest cover story just one year ago, Aniston declared, "I can't tell you specifically the feeling I had when I walked through the doors for the first time, except to say I knew I was home." She has since told People magazine she is selling the house to simplify her life. Aniston bought the property in 2006 for $13.5 million following her divorce from Brad Pitt. The cost of the architectural renovation and redecoration was not divulged.


Billionaire Buys at a Discount

Most recently listed at $55 million, the purchase price has been reported as $42.9 million by the Desert Sun.

The 249-acre property, called Porcupine Creek, includes a Mediterranean-style villa, a private 19-hole golf course (with that extra hole for playoffs), a driving range, a clubhouse and a swimming pool. Views encompass the mountains and valley floor.

The interior of the 18,430-square-foot main residence includes painted domes, wall murals, antique stained glass, a sunken great room with a baronial fireplace and a game room bar with old-fashioned beer taps. In addition to four guesthouses, each 1,860 square feet, four 600-square-foot casitas round out the estate.

The trophy property was constructed between 2000 and 2004 by Tim Blixseth and former wife Edra, who have since divorced. The sale was subject to Bankruptcy Court approval in Montana. It originally came on the market last year at $75 million.

Ellison is the world's sixth-richest person, according to Forbes. He is chief executive of software and hardware giant Oracle Corp. and owns the nearby Indian Wells Tennis Garden.


Home Studio Has a Track Record 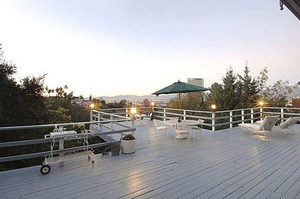 John McEuen of the Nitty Gritty Dirt Band has placed his four-bedroom, five-bathroom home in the Hollywood Hills on the market at $1,269,000.

The 2,597-square-foot Mediterranean has the main living spaces on the top level, bedrooms on the middle level and a bottom floor with about 1,000 square feet of space and a separate entrance. "A perfect studio and office ... away from the rest of the house but still in it," McEuen said of the space, which has 11-foot ceilings.

A founding member of the band, now in its 45th year, McEuen has recorded more than 45 albums. He displayed platinum and gold discs in the home's studio. More recently, two film scores and three CD projects were mixed there. McEuen also produced his six-years-running Sirius/XM radio show from the studio.

"With my performance schedule of an average of 120 cities a year, this home's proximity to show business made it ideal for easy connection to 'the business' when off the road -- 10 to 15 minutes from agents, studios, Burbank airport," he said. "Its hillside location is just what I always dreamed of: in the hills, secure, fantastic views, lots of parking, a feeling of privacy, yet in the middle of it all."

McEuen, 65, is selling because he is relocating to New York City. He purchased the house here in 1999 for $631,000, according to public records.

The 1973 contemporary, designed and landscaped with a tropical Balinese resort vibe, had been remodeled. The four-bedroom, five-bathroom house sits on more than a quarter of an acre with a swimming pool, spa and barbecue area with fire pit. It has 4,200 square feet of living space.

Richards, whose "Housewives" is in its first season, began her acting career with appearances on "Little House on the Prairie" (1975-82).


A History of notable Renters

The Beverly Hills Post Office-area home of the late stage actress Bijou Durden is on the market at $3.35 million.

Vintage light fixtures, moldings and shutters bring period details to the renovated 3,721-square-foot house. There is a master suite with a balcony, three upstairs bedrooms, another bedroom at the swimming pool level, a den and four bathrooms.

Durden, who died in 2009, owned the house for nearly 50 years. She was the daughter-in-law of Columbia Pictures co-founder Jack Cohn.