Judd Apatow Has Something to be Smiling About

The traditional house sits behind gates on nearly an acre at the end of a cul-de-sac. Built in 1997, the stately 6,000-square-foot home evokes an older era with a wood-paneled library that has a secret room -- just the place to write a murder-mystery but perhaps not an irreverent comedy. Regardless, a new owner will have five bedrooms, 5 1/2 bathrooms, a playroom and a butler's pantry with a temperature-controlled wine room. The wooded grounds include a swimming pool with spa.


Thicke Hopes For Another Spinoff 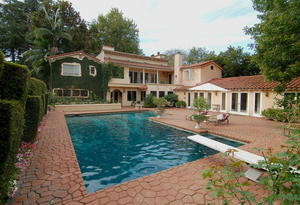 Actor-composer Alan Thicke and his actress wife, Tanya, have listed their Toluca Lake compound for sale at $4.8 million or for lease at $13,500 a month.

The Spanish Colonial, built in 1934, sits behind gates on a flat acre lot with a north-south lighted tennis court, an outdoor entertaining area and a swimming pool with a poolside kitchen and covered eating area. The living and media room has a carved wood-beam ceiling and a fireplace.

The master bedroom suite features a spa tub, a sauna, a balcony, a fireplace, a study and walk-in closets. The 8,656-square-foot house has five more bedrooms and six bathrooms, plus a second kitchen in a guest suite, another office and a gym. 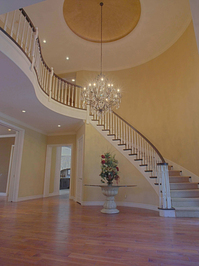 Actor and former professional wrestler Tommy "Tiny" Lister has bought a home in Calabasas for $2.5 million.

The two-story English Tudor-style house, built in 1990, has a two-story foyer, a home theater and a master suite with a sitting area, a fireplace, dual closets and a spa-like bathroom. The home's 6,158 square feet of living space include an additional five bedrooms and five bathrooms. There are separate maid's quarters.

Landscaped with tropical foliage, the backyard features a swimming pool, a poolside lanai, a covered entertainment area, rock waterfalls, a secluded gazebo and an outdoor kitchen.

Actor Scott Baio, his brother Steven and his sister Stephanie have listed their mother's Toluca Lake home at $4,995,000.

The 11,000-square-foot house, a guesthouse and a swimming pool sit on more than a half-acre of gated grounds. The master suite includes a sitting room, a fireplace, a separate gym and an office. There are seven bedrooms and eight bathrooms total, plus a 10-car garage.

The late Mario Baio had purchased the property in 1994 for $1,305,000, public records show. His children said they are selling because the house is too large for their mother, Rose.

Steven Baio acted on "Happy Days" (1983-84) and "Joanie Loves Chachi" (1982), among other programs. Steven's twin, Stephanie Baio, is director of operations at the House Ear Clinic in Los Angeles.

Two comedians are among recent buyers of lofts at Dogtown Station in Venice, Calif.

Dov Davidoff bought a single-story unit that was listed for about $900,000. Concrete and wood floors, a roof-top patio, marble surround baths and Caesarstone kitchen counter tops are among features of the 1,500-square-foot unit.

The comedian/actor starred in the Comedy Central stand-up special "Filthy Operation" (2010) and has appeared in the movie "Invincible" (2006) and the TV series "Raines" (2007).

Neal Brennan purchased a three-story town house listed at $1,050,000. The 1,800-square-foot unit has an open floor plan, high ceilings, stainless-steel appliances and white oak cabinets. Brennan was a writer, producer, director and actor on "Chappelle's Show" (2003-06). He is working on the series "Funny or Die Presents..." (2009-present).