Pop singer Katy Perry and her husband, comedian and actor Russell Brand, are listing their Los Feliz home at $3,395,000.

The gated property includes a stately 1922 Mediterranean-style main house and a swimming pool. The 4,600-square-foot home, with a classic exterior that belies its white contemporary interiors, has four bedrooms and 4 1/2 bathrooms.

Adding a touch of whimsy is Perry's vintage pink refrigerator, which she brought from a previous residence. It is not included in the sale.

The pair added more trees and landscaping during the year and a half that they owned the house to increase privacy. A 25-foot-tall teepee that Brand bought for Perry stands in the yard.

Perry converted the three-car garage into a wardrobe styling room. "It's 60 feet of costumes," said Ernie Carswell of Teles Properties, Beverly Hills, who has the listing.

Given Brand's time on movie sets and Perry's world tour, they have decided to make the New York pied-a-terre they bought last year their central residence and forgo maintaining the compound in Los Angeles.

Public records show the couple bought the Los Feliz house in 2009 for $3.25 million.


It's The Talk of West Hollywood 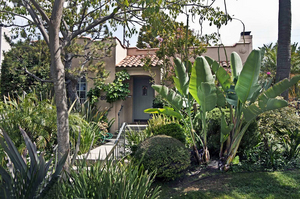 "Gossip Girl" actress Kelly Rutherford has her West Hollywood bungalow for sale at $1,299,000.

Built in 1926, the Spanish-style home has a living room that opens to a sky-lit dining room. The kitchen is updated with limestone counters and stainless-steel appliances. There are two bedrooms and 1 3/4 bathrooms. Outdoor living space includes a deck with a bar and a built-in barbecue surrounded by tropical landscaping.

The house also is available for lease at $4,995 a month. Public records show Rutherford purchased the home in 2005 for $1.25 million.


This Man's Home Was a Castle

A home once owned by actor Bela Lugosi, known for his early portrayals of Count Dracula on stage and screen, has come on the market in the Hollywood Hills at $2,367,000. 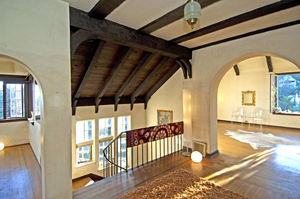 There are city, canyon and mountain views from the site, which is more than a quarter-acre.


Up In The Air in Beverly Hills

Jason Reitman, director and screenwriter of "Up in the Air," has listed his Beverly Hills home for sale at $1,595,000, the Multiple Listing Service shows.


Growing Up and Moving On

The family home of teen actor Colin Ford is up for sale in Encino at $1.95 million.

The contemporary Mediterranean, built in 2003, sits behind gates with a circular driveway in the front and a pool in back. Features include marble floors, skylights, a two-story-tall dining room, a bar and a sweeping staircase to the second floor. Including the master suite with balcony and fireplace, the 5,000-square-foot house has five bedrooms and 5 1/2 bathrooms.


Closing a Door in Calabasas

The 9,214-square-foot Spanish hacienda is in a gated community. The open-plan house has a family room with a wet bar and wine cellar, a theater, a game room, an office, seven bedrooms and eight bathrooms. Other features include six fireplaces, two three-car garages, an elevator, a pool and a detached casita with a full kitchen.