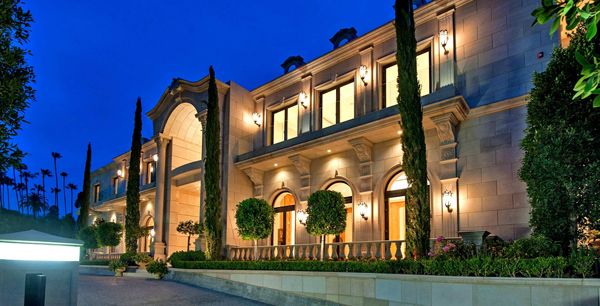 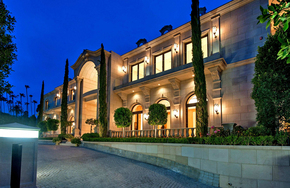 International developer Mohamed Hadid has put a palatial estate on the market in Beverly Hills at $58 million.

Known as "Le Palais" and "The Crescent Palace," the newly built 48,000-square-foot mansion sits on 1.09 acres near the Beverly Hills Hotel. The French chateau-style residence has a hand-carved limestone exterior. The three floors of contemporary interiors include an indoor pool, seven bedrooms and 11 bathrooms. 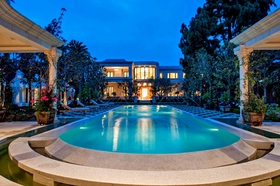 Pool view of $58 million estate for sale in Beverly Hills

Three additional bathrooms are in the outdoor areas, which feature a 60-foot-long infinity-edge pool, a pond and palm, olive and magnolia trees. There is parking to accommodate at least 10 cars.

Over 30 years, Hadid has developed hotels and commercial projects as well as luxury homes. He has appeared on "The Real Housewives of Beverly Hills."

The 7,308-square-foot contemporary Craftsman includes six bedrooms and seven bathrooms. The beach city is popular with college and professional coaches and athletes in part because of its proximity to Los Angeles International Airport and professional training facilities.

Kiffin earned about $2.4 million in 2010, according to USC's federal tax return. USC will be eligible for postseason play this football season after two years of National Collegiate Athletic Association sanctions.


MEG RYAN NOT SLEEPING IN BEL-AIR

It's doubtful the actress lost any sleep over the prolonged process or the sales price, however. She bought the property in 2000 for $8.995 million and had been leasing it out last year at $40,000 a month.

The classic Spanish-style house, built in 1931 and restored during Ryan's ownership, features stenciled beam ceilings, arched doorways and ironwork. There are city and ocean views, two family rooms, a pub room, a screening room, six bedrooms and seven bathrooms in 6,877 square feet. The four fireplaces include one in the guesthouse.

French doors open to a loggia, a dining pavilion, lawn and a swimming pool on the nearly three-quarter-acre lot.


DRUMMER HOPES TO SNARE A BUYER

Brad Wilk of Rage Against the Machine and his wife, vocalist Selene Vigil, have listed their house in Malibu at $2.699 million.

The contemporary home, built in 2001, takes in ocean views from its hillside perch. Walls of glass in the living room open to a large deck. The house has about 2,750 square feet of living space containing a loft office, two bedrooms and three bathrooms.

Potential buyers might want to keep in mind when making an offer that Wilk has an affinity for the number three, which he incorporates in his drum playing and decision making.

Wilk, 43, also has played with Audioslave. Vigil was lead singer for the band 7 Year Bitch.

Public records show he bought the property in 2003 for $1.9 million.


PLAYGROUND FOR SALE IN LA QUINTA

A Moroccan-style estate that was once owned by entertainer Merv Griffin is on the market in La Quinta at $9.5 million.

The 39-acre equestrian compound includes a racetrack, a 5,000-square-foot main house, four casitas, three one-bedroom staff quarters and apartments at both ends of the 16-stall stables for a total of 14 bedrooms and 12 bathrooms.

The estate was developed by L.A.-based Griffin in 1986 as a desert retreat for entertaining and work. He raised Arabian horses and, later, Thoroughbreds. Other features include an infinity pool and a 2.5-acre fishing lagoon.

Griffin, who died in 2007 at 82, was a singer, talk show host and television producer. He created game shows including "Jeopardy" and "Wheel of Fortune."

The property was previously listed two years ago at $14.5 million.


KARDASHIAN PAL CHECKS OUT OF WEHO

Reality show actor Jonathan Cheban has sold his condo in West Hollywood for $765,000.

The two-bedroom, two-bathroom unit is in a contemporary Mediterranean building that was constructed in 2004. The 1,606-square-foot condo features a den with a fireplace, a breakfast bar and a patio. There is an access-controlled elevator.

Cheban, 38, appeared on "Kourtney & Kim Take New York" last year and has been on other Kardashian family shows. The Kim Kardashian pal and Command PR publicist also was in "The Spin Crowd" (2010).