DiCaprio Places His Malibu Beach Home Up For Rent


Known for the variety of the roles he plays, Leonardo DiCaprio now is trying his hand at Malibu beach house landlord. He has listed his oceanfront Cape Cod-inspired home for $75,000 a month for a long-term tenant or $150,000 a month for leases of less than six months.

His Malibu Colony compound was recently remodeled and features a four-bedroom main house on the ocean side, a two-bedroom guest house and a detached loft with gym. There is a beach-front deck, a fire pit, gardens and lawn on the less-than-half-acre lot.

DiCaprio, 37, whose blockbuster hits include "Titanic" (1997), played former FBI chief J. Edgar Hoover last year in "J. Edgar" and will be Jay Gatsby in "The Great Gatsby," due out this fall. He is at work on Quentin Tarantino's "Django Unchained," in which he plays an evil plantation owner.

Public records show he bought the property in 2010 for an undisclosed amount.


A CHANGE-UP IN LOS FELIZ

Actors Ryan Reynolds and Scarlett Johansson have sold the Los Feliz house they bought together in 2010.

Reynolds, 35, and Johansson, 27, were divorced last year after three years of marriage.

He starred with Denzel Washington this year in "Safe House." Last year, Reynolds starred in "Green Lantern" and "The Change-Up."

Johansson stars this year in "The Avengers" and the upcoming "Under the Skin." She will be in "Hitchcock," due next year.

The pair purchased the property for $2.849 million.


BEVERLY HILLS IS HER NEW REALITY

Reality star Lauren Conrad has parted ways with her home in Hollywood for $2 million.

The renovated Spanish-style house, built in 1922, was featured on MTV's "The Hills," in which she starred. Entered through a gated courtyard, the 3,000-square-foot home has wrought-iron work, an original Spanish tile floor, four bedrooms and 3 ½ bathrooms. There is a lap pool and an outdoor fireplace.

Public records show that Conrad bought the property in 2008 for $2.36 million.

She sold because she recently bought a two-story penthouse in a 24-hour-security building in Beverly Hills for $1.35 million, public records show. The three-bedroom, four-bathroom contemporary condo has 3,233 square feet of living space, a spiral staircase and a large deck.

"NCIS" star Michael Weatherly found a buyer for his house in the Hollywood Hills for $1.845 million.

The redone one-story house sits behind gates and has ocean and mountain views. Features include French doors opening to the swimming pool, beamed ceilings, a fireplace, an updated kitchen with stainless-steel appliances, three en-suite bedrooms and a finished two-car garage used as a music room. There are four bedrooms, 3 ½ bathrooms and 2,600 square feet of living space. A covered area outdoors is set up as a gym.

Weatherly, 43, has starred as special agent Anthony DiNozzo on the highly rated crime drama since 2003 and appeared as the same character on "JAG." "NCIS" ranked as America's most-watched show for the two-week period that ended May 13, according to Nielsen.

Public records show Weatherly bought the property in 2008 for $2.21 million.


SHERMAN OAKS HOME HAS A MUSICAL PAST 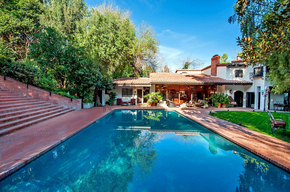 Niche marketer and philanthropist Kelly Stone and her husband, Bruce Singer, have put their compound in Sherman Oaks on the market at $3.995 million.

The gated house, built in 1946, was purchased by band leader Ray Anthony in 1952 for $40,000, according to Los Angeles Times archives. That's the equivalent of $347,298 in 2012 dollars, according to the Bureau of Labor Statistics' CPI inflation calculator. "Anthony will use the dwelling just during the two months of the year that he is in California," The Times reported. 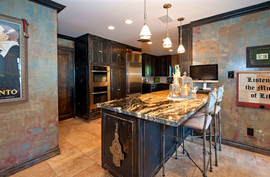 The two-story house features high ceilings, a wine cellar, an office and a gym. There are six bedrooms, eight bathrooms and 7,000 square feet of living space. The half-acre site includes a separate bungalow, a guest house above the garages, parking for 10 cars and a swimming pool at the foot of a wide brick staircase.

Kelly Stone established Scene Again in the mid-1990s as a boutique product placement company. She founded Planet Hope with her sister, actress Sharon Stone, to provide services to homeless, abused or disadvantaged children and their families worldwide.


SPINNING OUT OF THE HOLLYWOOD HILLS

Record producer David Anderle has sold his home in the Hollywood Hills West area for $3.7 million.

The Spanish-style villa, built in 1925, was once used as a speak-easy. Features include decorative tile work, beamed ceilings, a wine cellar and an artist's studio. The three-bedroom, 3 ½-bathroom house contains 3,813 square feet of living space and sits on a third of an acre.

The former A&M Records executive produced songs for Rita Coolidge, Kris Kristofferson and the Circle Jerks, among others. He worked with Brian Wilson to help him form Brother Records. Anderle also is a portrait artist.