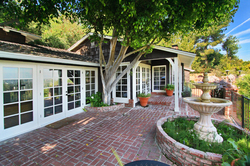 Often-tuxedoed actor Neil Patrick Harris, who will host the Tony Awards next month, has sold a ranch-style house in Studio City for $1,535,000.

Built in 1950, the home sits on more than a half-acre with mountain and valley views. The interiors feature dark-stained wood floors, vaulted ceilings and French doors. The house's 2,408 square feet include a living room with fireplace, a media and family room, a kitchen with a wine bar, three bedrooms and three bathrooms, according to details at Realtor.com. The guest suite has its own entrance. Outdoor entertaining spaces include a swimming pool with spa, a fireplace, an island barbecue and a pergola dining patio. 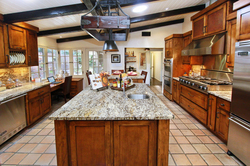 He co-stars in the New York Philharmonic's concert production of "Company," which will be shown in theaters nationwide next month.


Sellers Are In The Money Now

A Hollywood Hills home once owned by actress-singer-dancer Ginger Rogers and her actor husband, Lew Ayres, has sold for $1,905,000.

Set behind a wrought-iron entry and walls, the 1927 Spanish-style house has a second-floor studio, five bedrooms and 3 1/2 bathrooms in 4,800 square feet of living space. The grounds include a tea house-style enclosed patio and entertainment area with a barbecue spit, a fireplace and a koi pond. There are 270-degree views encompassing downtown L.A., the Getty Center, Santa Monica and the ocean.

Ayres, with scores of film and television credits, starred in "Young Dr. Kildare" (1938). He reprised the role in more than a half-dozen movies. The actor died in 1996 at age 88.

The Movieland Directory places Rogers in the home in the 1940s.


A Model Home in Wilshire High-Rise

Designed for entertaining, the contemporary 3,277-square-foot unit has 10-foot ceilings, marble and hardwood floors, an open-plan living and dining room and a breakfast room. The master bedroom has a balcony, dual bathrooms and three closets. The condo has three bedrooms and 3 1/2 bathrooms total. Building amenities include a concierge, valet parking, a swimming pool, a gym, a library and wine storage.

Ferrare, who co-hosted "A.M. Los Angeles" with Steve Edwards in the '80s, launched a cooking show, "Big Bowl of Love," on OWN in January.

The couple bought the high-rise unit in 2003 for $2.8 million, public records indicate.


Days of Wine and Horses

Called Hacienda de Endar and designed as a thoroughbred breeding and training facility, the property is set in Riverside County wine country and includes an 8,902-square-foot main house, guest houses, a five-hole golf course, a tennis court and a swimming pool with spa.

Among the equestrian facilities are a 14-stall main barn with an attached office, an 18-stall barn with two tack rooms, a hay barn, several jumping arenas and pastures.

The 3,200-square-foot home, built in 1937, opens in back to a pool and a spa. Living spaces include a step-down living room with a fireplace, four bedrooms and five bathrooms.

Gullit, 48, was an ESPN soccer analyst last year for the World Cup. The Dutchman was European footballer of the year in 1987 and led the Netherlands to an international trophy in the European Championship in 1988. Gullit was the Galaxy coach from 2007 to 2008, the year he bought the property for $4.25 million.