(LOS ANGELES, CA) -- Pierce Brosnan and his wife, environmental activist and former broadcast journalist Keely Shaye Smith, put the property on the market at $3.9 million in 2010 while building another house nearby.

The gated Mediterranean they sold has separate space for use as an office or media room and sits on more than a quarter of an acre with lawn space and a courtyard fountain. The flower boxes and hydrangea-lined pathways are perhaps a nod to Brosnan's Irish roots.

Features include arched windows and doorways, high wood-beam ceilings in the living room, walls of glass, plank oak and paver floors, several balconies and fireplaces in the dining room, library, living room, master bathroom and office space. Picture windows bring the ocean view into the eat-in kitchen, which has a center island cooktop and a second island with a sink. There are three bedrooms, 3 ½ bathrooms and 3,800 square feet of living space.


Ready to Change Their Game Plan

Former model Nicole Murphy and football analyst Michael Strahan have listed their house in a gated community in Brentwood at $6.95 million.

Defensive end Strahan, 40, played for the New York Giants throughout his NFL career, retiring in 2008 after winning Super Bowl XLII. He starred in the 2009 TV series "Brothers."

The property was purchased for $5 million in 2009, the year Murphy and Strahan got engaged.

They are selling because they don't spend much time at the house, according to listing agent Bob Hurwitz of Hurwitz James Co.

The Beverly Hills Post Office-area home that entertainer Ed McMahon fought to keep from foreclosure in a much-publicized battle in 2008 has been sold in an all-cash deal for its most recent asking price of $3.475 million.

Six offers came in on the property after its late-November listing, and the two-story house in the gated Summit community was in escrow in 10 days, closing after the first of the year.

The transaction may finally end the saga of what has been a beleaguered property history.

The 7,000-plus-square-foot house was purchased by McMahon in 1990 for $2.6 million, according to The Times' archives.

In 2006 he listed the contemporary Mediterranean at $7.699 million, the Multiple Listing Service shows. It was on and off the market at a variety of lower prices for the next several years.

Then in 2008 an ailing McMahon defaulted on $4.8 million in mortgages with Countrywide Financial. Donald Trump announced his intention to buy the first mortgage, but it eventually was sold to another investor who rented the house back to McMahon. The comedian, game show host and talk show sidekick died in 2009 at 86.

The property was sold at foreclosure to a group of investors for $3.951 million in October 2010. After an extensive makeover, repairs and staging, the house was listed in November at $3.475 million.

The home, built in 1989, has six bedrooms and 5 ½ bathrooms. It sits on a third of an acre with a swimming pool and dining pavilion.


Beaming Out Of Westwood Area 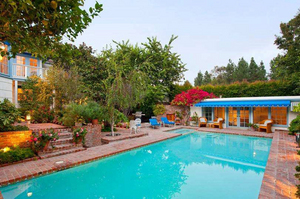 The Westwood-area home that actor Leonard Nimoy bought with his first wife, Sandra Zober, has been sold for $1.95 million.

The traditional-style house, built in 1938, also has contemporary elements and features window seats, high ceilings, walls of windows, skylights and two fireplaces. There are four bedrooms, four bathrooms and 3,664 square feet of living space. Outdoor amenities include a swimming pool, a spa and a pool house.

The couple bought the house in 1968 when Nimoy was playing Spock on "Star Trek." They were divorced in 1987, and Zober remained in the home. An art collector and patron, she died in April at 83.

The house, which was sold above the asking price within two months of coming on the market, had been listed at $1.72 million.


Gossip About a Home in WeHo

Not every home that didn't sell last year is sitting vacant. "Gossip Girl's" Kelly Rutherford listed her West Hollywood (WeHo) bungalow for sale or lease in May and ended up leasing it out at $4,700 a month.

Built in 1926, the Spanish-style home includes a sky-lighted dining room, an updated kitchen with limestone counters, two bedrooms and 1 ¾ bathrooms. Outdoors, the deck features a bar, and a built-in barbecue is surrounded by tropical landscaping.