Ozzy and Sharon Osbourne Put Their Estate Home on the Market

The 2.5-acre promontory sits off a cul-de-sac in the gated community. The Cape Cod-inspired mansion, built in 2001 and featured in the June issue of Architectural Digest, may not be what one might expect from the couple. The house has a paneled study with fireplace, a home theater and studio area, six en suite bedrooms and a guest apartment with kitchenette.

The family room of the 11,000-square-foot home has sliding barn doors and a reclaimed brick fireplace.

The grounds include a swimming pool, spa and a barbecue island. A bathroom by the pool raises the total number of baths to 10.

Sharon Osbourne, 58, is a judge on "America's Got Talent" (2007-present) and a co-host on "The Talk" (2010-present). She also is the manager of Ozzy, 62, formerly lead singer of Black Sabbath before launching his solo career. He has sold more than 100 million albums over four decades and will be on tour again in Europe next month.

They have owned the property since 2007, when they bought it for $12,388,500. That's just long enough for Sharon Osbourne to have thoughts of moving again.

"I get itchy feet," she said in the AD interview. "We've never stayed in any place longer than seven years."

The couple also has a Malibu beach house for sale at $9.5 million.

Tomer Fridman of Ewing & Associates Sothebys, Calabasas, is the listing agent for the Hidden Hills property, according to the Multiple Listing Service. 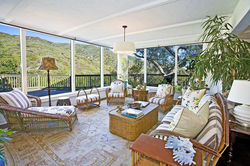 The two-story ranch-style home sits on three acres with separate guest quarters, a pool, a lighted tennis court, a three-stall horse paddock and access to nearby riding trails on more than 2,000 acres of park land. The main home was built in 1958 and had been owned by Olivia Newton-John. Five bedrooms and six bathrooms lie within nearly 6,000 square feet of living space.

Since she starred on the '60s TV series "Gidget" and "The Flying Nun," Field, 64, has made a name for herself on the big screen too in such films "Forrest Gump" (1994), "Places in the Heart" (1984) and "Norma Rae" (1979). She played the matriarch in the recently canceled "Brothers & Sisters" (2006-present) and will play Mary Todd Lincoln in the Steven Spielberg - directed film "Lincoln," to be released next year.

Douglas E. Carroll of Prudential Malibu Realty and David Offer of Prudential Brentwood were the listing agents, according to the MLS.

Update: The longtime Bel-Air home of actress Elizabeth Taylor has sold for an undisclosed amount.

The house came on the market in May at $8.6 million. The listing agent, David Mossler of Teles Properties in Beverly Hills, declined to reveal the sales price, and weeks or months may pass before it will appear in public records.

Owned by the Oscar-winning actress since 1981, the 1960s ranch-style house sits on 1.27 acres, which include a swimming pool with spa, gardens and a koi pond.

The 7,000-square-foot home has a downstairs master suite, two other bedrooms and maid's quarters. A second master suite upstairs has walls upholstered in her signature color: violet.

Taylor, who died in March at 79, won Oscars for her performances in "Butterfield 8" (1960) and "Who's Afraid of Virginia Woolf?" (1966). She is ranked seventh on the American Film Institute's greatest screen legends list.


Harmonizing on the Westside

Soprano Sarah Brightman has bought a house in the Beverly Hills Post Office area for $2.85 million.

The three-story contemporary, built in 2009, was designed for indoor-outdoor entertaining, with French doors opening from the living and dining rooms to terraces. Other features of the nearly 4,000-square-foot house include a steam room, a rooftop lounge, a swimming pool and a spa. It has three bedrooms and 41/2 bathrooms.

Brightman, 50, got her start as a dancer and disco singer before starring in Broadway musicals, including "The Phantom of the Opera." She performed at two Olympic Games ceremonies and has gained an international following as a classical singer.

Stephen Lynch of Keller Williams, Hollywood Hills, handled both sides of the transaction.


An Airy Aerie on Wilshire Corridor

Philanthropist Barbara Davis, the widow of billionaire Marvin Davis, has listed her Wilshire Corridor condominium for sale at $1,885,000.

The unit, with views of the Santa Monica Mountains, has a direct entrance from a private elevator. A butler's pantry, a laundry room, two bedrooms and 21/2 bathrooms lie within in 2,527 square feet. The 97-unit building, called the Wilshire, was built in 1991. Amenities include 24-hour valet, doormen, security, a gym and a pool.

Barbara Davis chairs the Carousel of Hope Gala in Beverly Hills, held every two years, which raises money for childhood diabetes. Marvin Davis, who died in 2004 at 79, made his fortune through oil deals and owned 20th Century Fox in the 1980s. His obituary in The Times called him "the wealthiest individual in Los Angeles for much of the last two decades."