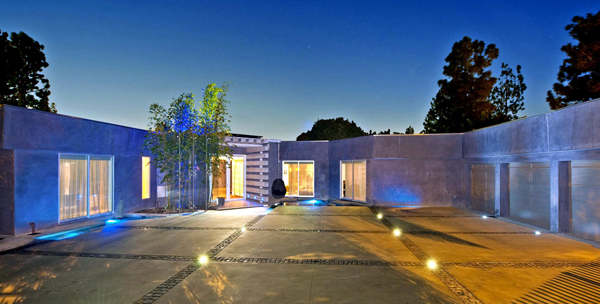 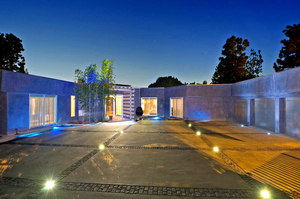 Former Von Dutch chief executive and clothier Tonny Sorensen -- who gained recognition for popularizing a trucker cap bearing the company name and using celebrities to promote the brand -- has left his own signature on his personal residence in Beverly Hills and put it on the market at $6.9 million.

The gated Midcentury Modern was built in 1961 but completely redone by the Danish entrepreneur. He combined his love of minimalism and high-quality materials in the single-story, 6,000-square-foot home.

A small bridge spans a koi pond at the entrance to the open-plan house. Cambodian water sculptures from the 16th and 17th centuries stand in the pond.

"I had some Buddhist monks come to the house and bless the water," he said, "because I believe in good energy." 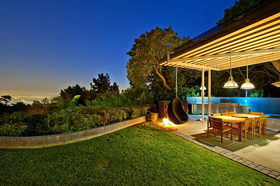 The master suite features a fireplace and dual bathrooms for a total of four bedrooms and five bathrooms. In the master bathroom, a large steam shower contains a cold plunge tank. The tank maintains a temperature of 44 degrees and is designed to prevent sports injuries and for health, Sorensen said. A tub carved out of marble sits nearby.

The half-acre site in the Trousdale area includes a swimming pool, a sauna, four fire pits, an outdoor kitchen and a built-in barbecue. In addition to the three-car garage, the motor court has room to park an additional 20 vehicles. There are city and ocean views.

In 2010, Sorensen launched the clothing brand CCR, for California Christiania Republic, creating a casual jumpsuit worn by Katy Perry and other notables.

Sorensen, 48, is selling because he bought a 700-acre property in the Three Rivers area that backs up to Sequoia National Park. He is planning a 7,000- to 8,000-square-foot resort home there as well as yurts, trailers, treehouses and pre-fab houses for use by artists. Two miles of river run through the site.

"I want to spend more time up there," said the outdoorsman, whose hobbies include hiking, mountain biking, rock climbing, river rafting and off-roading. When back in L.A. on business, he said, he plans to stay at hotels.

The Santa Paula ranch that box-office star Steve McQueen and his third wife, Barbara Minty, once owned is now bank-owned, public records show. The property had been for sale in 2009 at $1.95 million and had been reduced to $799,000 when it was removed from the market late last year.

The Victorian-style house, built in 1892, has antique stained-glass windows, mountain views and fireplaces in the family room and kitchen.

The ranch includes 3 acres of Syrah vineyards, fruit trees, a 3-acre equestrian facility and a 4,500-square-foot hangar where McQueen kept his car and motorcycle collection, which eventually included about 130 bikes. It is near Santa Paula Airport, where he flew his yellow Stearman biplane.


Ready to Terminate Her Residency

Actress Linda Hamilton, who has had a recurring role on "Chuck" for the last two years, recently listed her gated villa in Malibu at $5.495 million.

Hamilton, 55, is known to a generation of filmgoers as Sarah Connor from the "Terminator" movies starting in the mid-1980s. She also starred in "Beauty and the Beast" (1987-90).

Foo Fighters' Taylor Hawkins and his wife, Alison, have bought an estate in Hidden Hills for $2.75 million.

A main house and two-bedroom guesthouse sit on more than an acre at the end of a cul-de-sac. Interior features include high ceilings, an oversized granite fireplace in the living room, two master bedroom suites and five additional en suite bedrooms. There is more than 7,000 square feet of living space.

The property has a barn, horse facilities, an expansive lawn, mature trees and a swimming pool with a spa.

The estate, once owned by "Mobbed" host Howie Mandel, had been listed for $3.099 million.

The Hawkinses, longtime Topanga residents, moved because they wanted a larger home. Hawkins, 40, joined the rock band in 1997 as the drummer. Before that he toured with Alanis Morissette.

Actress-writer Diane Farr has put her Spanish Revival-style house in West Hollywood up for sale at $899,000.

Two of the three bedrooms open to a lawn with a hot tub, a deck with built-in seating and a sound system. There are security cameras and a voice entry system.

Farr, 38, had regular roles on "Californication" (2009) and "Numb3rs" (2005-09). More recently she appeared on "The Mentalist" and "CSI: Miami." Her second book, "Kissing Outside the Lines," is a comic memoir about interracial marriage.