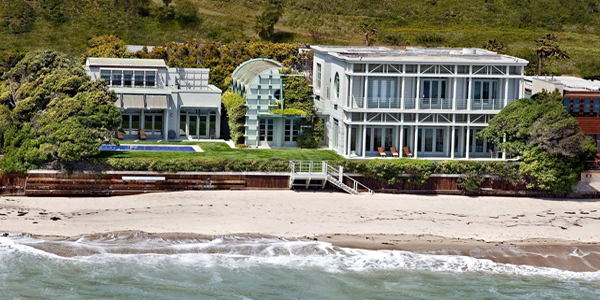 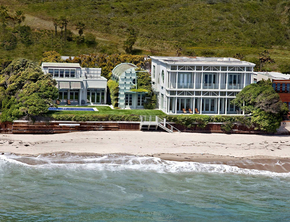 Sitting on a three-quarter-acre lot along Billionaire's Beach, so named for its wealthy homeowners, the main house is entered through a three-story rotunda topped by a skylight. Circular windows are used throughout. A copper-roofed screening pavilion doubles as the family den. There is also a two-story guesthouse for a total of nine bedrooms, 13 bathrooms and 10,317 square feet of living space.

A gazebo for outdoor dining sits by the swimming pool and an expansive lawn.

Actor-comedian Jim Carrey has listed his place in gated Malibu Colony at $13.95 million.

There are fireplaces in the living room and master bedroom for a total of five bedrooms, 5½ bathrooms and 2,866 square feet of living space. A spa sits on the rooftop deck.

Actor Matthew Fox can no longer be found living in Manhattan Beach. The "Lost" star has sold his house there for $1.875 million.

Fox, 45, used the house as his residence before moving to Hawaii to shoot "Lost" (2004-10). He later relocated to Oregon. Fox will star in the thriller "Alex Cross," due for October release, and in next year's historical epic "Emperor."

Actress Poppy Montgomery, star of the CBS series "Unforgettable," has put her house in Pacific Palisades on the market at $3.295 million.

Built in 1930, the Spanish-style home has four bedrooms, four bathrooms and a guest unit with a full bathroom and a separate entrance. Features of the 3,800-square-foot house include reclaimed barn wood floors, wood-beam ceilings and a spa-like master bathroom with a steam shower and vintage double sinks. French doors off the family room lead to a yard containing a waterfall grotto/spa, an outdoor kitchen with a thatch-roofed pavilion and a courtyard.

Celebrity florist David Jones, who has worked for stars including Liam Neeson, Tony Curtis and Elizabeth Taylor, has listed his studio and home in West Hollywood at $7.995 million.

The first floor of the French chateau-style building contains Jones' floral shop and another retail space. The second floor has five offices and a reception area, and the third floor is his pied-a-terre, with two bedrooms and two bathrooms.

The living room, dining room and master bedroom have coffered ceilings with cove lighting and French limestone fireplaces. "I brought the mantels from France," Jones said. The 6,750-square-foot building also has a motor court and a backyard that he uses as a nursery.

When Jones bought the building in 1994 it had only two floors, but he was able to add a story. "A false mansard roof dictated the height limit," he said. "Mine is the only building with a third floor in the area."

He has used the custom-built apartment as his personal residence, frequently entertaining friends and clients. Jones is particularly fond of the terrace, which looks out at a neighbor's tree and faces the hills. "I always have breakfast out there," he said.

The terrace and kitchen have slate floors, the bathrooms are done in marble and granite and the bulk of the living space flooring is herringbone parquet. An elevator decorated in chinoiserie panels hand-painted over a 3 ½-year period provides the means of transport for Jones and his three Brussels Griffons, he said. "My dogs like the ride."

The floral designer got his start in New York City with an established florist and soon counted among his clients Babe and Bill Paley of CBS and philanthropists Bunny and Paul Mellon.

After he moved to Los Angeles in 1963, his friends Nancy Reagan and Betsy Bloomingdale introduced him to entertainment industry customers. He has done flowers for princesses, President Reagan's state dinners and a California visit by Pope John Paul II.

Jones is selling as he prepares to branch out and pursue projects such as a book. He will continue to take private requests for flowers but hopes to do more personal entertaining, charity work and garden design.

"I want to have a little more free time for me," Jones said. 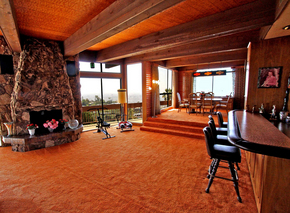 Big-band leader and trumpeter Ray Anthony has his home in the Hollywood Hills West area on the market at $5.2 million.

Custom-built for Anthony in 1975, the 3,881-square-foot house contains a den, an office, a gym, two fireplaces, two bedrooms and three bathrooms.

"We built it to take advantage of the tremendous views," he said of his hillside home, which sits on about a quarter of an acre on a cul-de-sac.

Anthony, who turned 90 this year, used the house for years to run a business selling big-band CDs. He planned to play at a belated celebration marking his birthday this month.

He has performed with Frank Sinatra, Glenn Miller and Jimmy Dorsey, among others. Anthony and his band appeared in several movies and on the late-1950s variety show bearing his name. The band's recordings popularized "The Hokey Pokey" and "The Bunny Hop."

Anthony said he is selling to move closer to a friend in Beverly Hills.