Ed McMahon, Johnny Carson's longtime sidekick on "The Tonight Show" is "hanging in there," according to Howard Bragman, McMahon's publicist, "and we're optimistic, because he is a fighter." 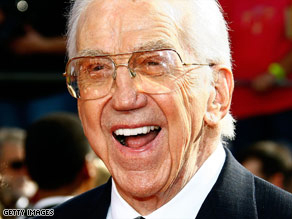 Bragman is just one of many fans who have been rooting for Johnny Carson's former announcer since he was hospitalized weeks ago with cancer and pneumonia. Today even more fans are expected to wish him well,because it is his 86th birthday.

McMahon and his wife, Pamela, were in the news in December when they struck a deal to stay in their Beverly Hills home. It had been threatened with foreclosure after McMahon broke his neck and fell behind in making $644,000 in mortgage payments.


The house, which had been on the market at $6.25 million, has six bedrooms and five bathrooms, and it is in a gated community overlooking Mulholland Drive.

Ed McMahon was Johnny Carson's announcer and sidekick on "The Tonight Show" from 1962 until Carson's retirement in 1992. McMahon introduced the talk-show host with a resounding "H-e-e-e-e-e-ere's Johnny!" Carson died in 2005.


Actor Ashton Kutcher is selling the Beverly Hills home where he lived before marrying actress Demi Moore in 2005. 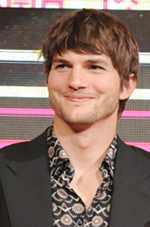 The asking price was $3.7 million, and it's in escrow. The home has six bedrooms and 5.5 bathrooms in 4,860 square feet. It also has a tennis court, a kitchen with a banquette and a center island; a pool, a spa and a putting green.


If you want your home to have the Old-World flair of a Ritz-Carlton, there is a 48,000-square-foot one on 2.2 acres in Bel-Air that is listed at $85 million. If you want more grounds, there is an Old World-type Bel-Air home on five acres that is on the market at $125 million.

Mohamed Hadid, known for developing hotels and high-end homes, built the 48,000-square-foot, $85-million home for himself, then listed the estate.

And get these for features on the smaller home: Ten bedrooms, 14 bathrooms, a bar lounge, a butler's pantry, a staff bedroom and office; a 5,000-bottle wine cellar and tasting room, a grand ballroom seating up to 250; a screening room, a gym, a Moroccan room, a Turkish hammam and a game room.

In the master bedroom suite, there is a sitting room, a powder room, his-and-hers bathrooms and dressing rooms; three family bedroom suites, and a second master suite with its own lanai and gym.

There are 19 fireplaces, an elevator and entertainment systems throughout the house. There are staff quarters over the garage and an open motor court for 20 vehicles plus garage facilities to accommodate two limo-length vehicles.

On the parklike grounds are a swan pond, fountains, rose gardens, a 70-foot Infinity pool, a 12-person spa, an alfresco dining area, an outdoor kitchen and pizza oven, and courtyard dining for 100 with plenty of room for a potluck.

Hadid designed, built and decorated the main residence himself. He has developed Ritz-Carlton hotels in New York, Houston, Washington D.C. and Aspen, Colo.


Brady Anderson, a former major league baseball player, has become a house designer with his re-do of a Malibu home he listed at slightly under $9 million.

The 3,500-square-foot, contemporary two-story has three bedrooms, three bathrooms and ocean views. The home also has vaulted ceilings, sliding glass doors in the living room, a kitchen with top-of-the-line appliances and a terrace off the kitchen. There is an outdoor dining area with a fire pit and an observation deck with a spa.

Anderson was an outfielder with the Boston Red Sox. He spent most of his professional ball career with the Baltimore Orioles but ended with the Cleveland Indians. The former ballplayer, 45, spent 15 seasons playing in the majors, starting in 1988.

Linda and Kim Kanner of PreVue Properties, El Segundo, have the listing.