(LOS ANGELES, CA) -- It was no small feat for Jack Black  to find a house to buy in the Los Angeles area. It was a two-year search, local real estate agents report. But now the "Gulliver's Travels" star has bought Flea's Los Feliz-area home for $5,965,000, Redfin.com shows.

Sitting on a flag-shaped lot of more than half an acre, the two-story 1915 house had been renovated by Flea (a.k.a. Red Hot Chili Peppers bassist Michael Balzary), who added a Topanga Canyon ambience. The kitchen is infused with a hippy vibe.

Seven bedrooms and three bathrooms are included in the home's 6,500 square feet of living space. The house has a swimming pool, a motor court and solar roof panels.

Black, 41, plays the title role of Lemuel Gulliver in the 3-D comedy adventure, which was released on Christmas Day. The film follows his starring role in "School of Rock" (2003), his voice work in "Kung Fu Panda" (2008) and his part as half of the rock duo Tenacious D.

The property was sold outside of the Multiple Listing Service as a pocket listing.

Real estate developer George Santo Pietro has sold a Beverly Hills Post Office-area mansion he built on spec. The $23.5 million sales price was the highest reported for 2010 on the Combined Los Angeles Westside Multiple Listing Service, although more expensive transactions did take place outside the MLS.

The 24,595-square-foot, Italian-style villa sits on more than 2 acres in gated Beverly Park. The nine-bedroom, 15-bathroom house features a two-story-high living room, a wine room and a theater. The grounds include a swimming pool and parking for 40 cars.

Built in 2007, the sprawling mansion originally was listed at $50 million. It reportedly was leased to singer-songwriter Prince for $200,000 a month at one time.

Pietro is the former husband of "Wheel of Fortune" letter lighter Vanna White.

Mauricio Umansky of Hilton & Hyland, Beverly Hills, was the listing agent. Jeffrey Hyland and Chad Rogers of the same office represented the buyer, according to the MLS.

"Private Practice" and "Friday Night Lights" -- redesigned and expanded the property to its three-bedroom, 3.5 -bathroom configuration.

The plan includes a double-height dining room, a family room with wood-burning fireplace and a master suite with a fireplace and balcony.

The grounds have a motorized rock-bed stream, a children's playhouse and a 200-year-old oak tree.


'The Bridge To' His Next Place?

Producer Gary Mehlman has listed his house in the Beverly Hills Post Office area at $2,249,000. 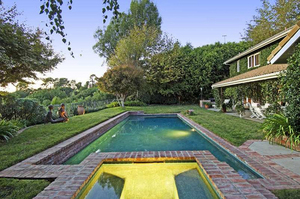 Among Mehlman's producing credits are "The Bridge to Nowhere" (2009) and "Captivity" (2007). He has worked at Columbia Pictures, Universal and Sony Studios. He is in the process of casting for the thriller "The Au Pair." 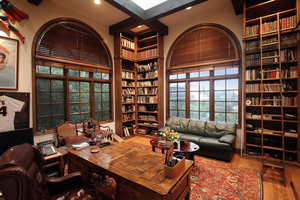 The longtime Sunset Strip-area home of the late screenwriter Thomas Mankiewicz has sold for $2.2 million.

Built in 1952 with four bedrooms and five bathrooms, the 4,290-square-foot house had been reconfigured into offices and bachelor's quarters by Mankiewicz. The entry hall leads to several rooms for entertaining and a large bar. An office has library shelving set under a cathedral ceiling.