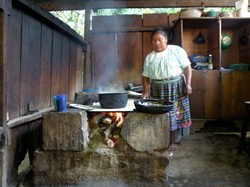 In September 2008, we saw many beautiful places in Guatemala including the colonial town of Antigua where we hiked to the top of the same volcano that recently erupted.  It was a strenuous trek that tested us, but once at the top it was an amazing site to behold.  In addition to seeing the lava literally spewing from the side of Mt. Payaka, the view of the surrounding valleys, towns and other volcanoes was spectacular.  Although the recent eruption did not result in the widespread economic devastation as did the volcano in Iceland, the personal hardships for the locals was much worse.

After Antigua came Coban, which was the waypoint before our next destination, a remote Mayan village called Santa Maria Tzeja located deep in the jungles of Guatemala.  We had no idea just how remote until after we had endured the four-hour bone-jarring ride on the some of the roughest roads on the planet.  The minivan designed to hold 15 people (including the driver) at one point had as many as 30 passengers with some of them sitting on top of the van along with our backpacks and other cargo.

We arrived at Santa Maria Tzeja through a series of fortunate events.  I met our host Randall Shea while he was visiting family in Central Florida several months before leaving on our trek.  We kept in contact via email and made plans to stay with him and his family for a few days. 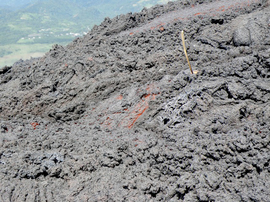 After arriving at what were told was our destination, the van driver stopped and unceremoniously deposited us along with our backpacks at the bottom of a small hill and pointed up, indicating where Randall lived.  It had just rained and climbing the slippery, wet, muddy path with heavy backpacks was no easy task.  As we soon learned, mud is synonymous with Guatemalan jungles.

Randall and his beautiful family welcomed us like old friends.  His wife, three daughters and newborn son lived like the other villagers in several modest structures with a separate kitchen facility.  They carried water from a cistern that collected rain from the roofs, and had the standard multi-hole privy out back.  Electricity was supplied to the village once a day for several hours by a generator that ran mostly to power the computers for the nearby school.  Even in this remote part of the world, access to the Internet is almost a birthright.

During our stay, each meal was prepared by a different member of the village, which gave us an up-close look at daily life.  The food was plentiful, healthy, delicious and always cooked over an open wood fire.  Randall was our interpreter and we learned so much from our gentle hosts including how they dealt with challenges, tragedies, heath care and even cattle rustlers. 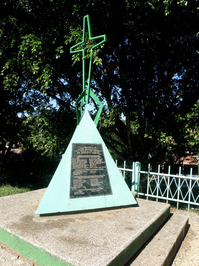 Memorial to the massacred villagers

In the 1970s, a Spanish priest named Padre Luis founded the village.  With the backing of the government, he and a handful of people hiked to a remote section of Guatemalan jungle to build what eventually became Santa Maria Tzeja.  After several prosperous years, a change in the government reversed all of their accomplishments, and in the early '80s resulted in the torching of the village and the massacre of more than a dozen villagers.  The army rounded up most of the remaining villagers.  All were imprisoned and many were tortured.  As with so many wars, the villagers were caught in the middle between government troops and guerrillas, each demanding their allegiance.  The horror did not end until a peace treaty was signed in 1996, and the villagers were allowed to return and rebuild their devastated lives.

Village health care was simple and efficient.  The two part-time health care workers had a simple map with a grid of the village on the clinic wall, which indicated where each resident lived.  In addition, they had a paper ledger that listed every villager with their corresponding medical status.  They recorded if someone in the household was pregnant, when young children needed shots and any other medical conditions that should be monitored.  The health care providers were always short on supplies, but never lacked a smile or the willingness to help.

During the stay we also learned that vigilante justice is alive and well.  Several months before arriving, cattle rustlers had acquired two new stock trucks and had stolen a number of prized bovine from a farmer in a neighboring village.  The locals were on to them and the thieves fled in the direction of Santa Maria Tzeja.  Apparently they were not the smartest bulls in the herd, as there was only one way in and one way out, and the bad guys had unwittingly trapped themselves. 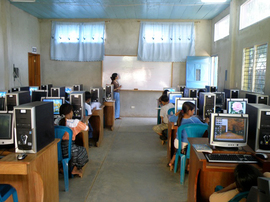 Computer training at the local school

Word was passed on to the villagers in Santa Maria Tzeja and they apprehended the rustlers as soon as they arrived.  After unloading the cattle, the villagers immediately torched the two new vehicles and held the thieves until the authorities arrived.  The trucks were sacrificed for good reason.  Based on previous experience, they knew a well-placed bribe would have allowed the rustlers to escape with their trucks and possibly the cattle as well.  Even if the cattle were returned to their rightful owner, the thieves would still have the means to continue their unsavory trade.  The only evidence remaining of the event were two charred and rusting hulks.  Not surprisingly, according to Randall cattle rustling was at an all time low in their region.

Next week's article will feature other places we visited in Guatemala including the quaint lakeside town of Flores, the mystic Mayan ruins of Tikal and the working class towns along the way.  The always-challenging teeth-rattling transportation system was half the adventure.  Such is the life of a traveler.