Travel is the Ultimate Education 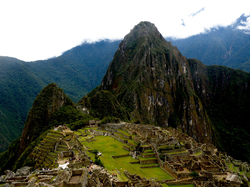 I posted an article on Real Estate Channel on July 6 titled Central America, No shortage of Beautiful Places, People and Cultures, which summarized the first leg of our trek south of the border.  This article is a recap of our journey through South America, and although the two regions are similar they are also vastly different.   Where do I begin?

For starters, the cultural experience seemed a bit more gritty in Central America than South America.  Granted, we did visit the more developed countries of South America, but in Central America, it seemed we had stepped back in time.  Depending on the location, it could have been 10 to literally hundreds of years.  According to fellow travelers, countries like Bolivia, Paraguay, Suriname and many parts of the countries we visited could have easily provided that kind of experience.

We began the South American leg of our trek in Lima, Peru.  It is a large modern city with an infrastructure and amenities similar to most major cities in the U.S.  We were only there for two days before flying to Cusco, the capital of the once mighty Inca Empire.  At more than 11,000 feet above sea level, it took several days to become acclimated to the thin air in Cusco.  The next stop was Machu Picchu, indisputably one of the Seven Wonders of the World.

A lasting impression of Peru was the Inca's mastery of working with nature.  It seems that in almost every other culture, there is a constant tug-of-war between man and nature.  And if given enough time, nature always wins.  The Incas knew how to exploit their natural surrounds, but not at the expense of nature.  For example, they were experts at channeling water to benefit society rather than damming up rivers, and being in constant fear that the dams might break.  Their systems are still in place, and working in concert with nature to this day.  They were a genius society of epic proportions. 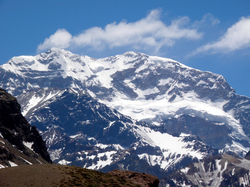 Chile was a surprise in many ways.  We had expected a county closer to "third world", but it was anything but.  Not only was it "first world", it had the best road infrastructure of anywhere we had traveled, and a bus system to match.  It was a polite, orderly society with virtually all of the amenities of the U.S. or Europe.  It possessed unparalleled natural beauty; however, the people in general were not as friendly as other places we visited.  It also had the fewest English-speaking people, and the Spanish spoken there was unlike anywhere else.  Even residents of the neighboring countries admitted having difficulty communicating with their Chilean counterparts.

Our next major destination after leaving Chile was Mendoza, Argentina, which is located on the east side of the great divide (aka the Andes), and the border between the two countries.  The Alps of the Southern Hemisphere is both formidable and awe-inspiring.  Equally impressive are the deserts and canyons that were within a few hours drive of Mendoza.  Argentina's business hours take some getting used to and a fair amount of planning, as most stores and restaurants close at 1:30 p.m. and don't reopen until 5:00 or 6:00 in the evening.  We forgot this on most days and were quickly reminded as nearly everyone observed their right to an afternoon siesta.

There was so much more to see in Argentina, but both time and our personal finances conspired against.  We left Mendoza on a luxurious (a word not often used to describe bus transportation throughout the trek) overnight motorcoach to Buenos Aires.  Instead of staying a few days in the city of "good air" or traveling further south, we immediately caught a fast ferry to Uruguay.

As with Chile, our uneducated, uninformed opinion of Uruguay was that it was more third world than first, and nothing could have been further from the truth.  It is a modern, well-developed country with a very good infrastructure.  Of all the places we visited, the single-family homes in Uruguay looked more like those in the U.S.  From our perspective the country only lacked two things . . . a banking system that offered easy access to ATMs, and efficient immigrations processing procedures when departing the country and going into Brazil at the Chui/Chuy border crossing. 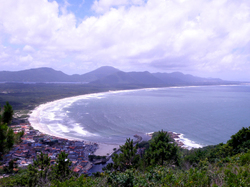 Brazil is enormous and we were only able to see a tiny part of it.  Aside from charging the highest Visa fees of any country we trekked through, Brazil was by far one of our favorite countries.  In addition to its natural beauty and myriad cultures, Brazilians were among the friendliest people we encountered.  They seemed to truly live life to the fullest, did not take themselves too seriously, and had a great balance between work and play.  The one cultural nuance we could not acclimate to was when they ate their supper/dinner.  Most Brazilians do not eat until at least 9:00 or 10:00 at night, which is typically our bedtime, not eating time.

We enjoyed the natural beauty and abundant recreation offered near Florianopolis, an island located on the southern east coast.  Before completing our four-month trek through Central and South America, we visited friends in the city of Uberlandia.  It was a bittersweet reunion, but one that was the perfect ending to a perfect adventure.

In depth articles about each of the places we visited can be found by clicking on the link at the bottom of this page.  Each tells our personal story and expounds on our impressions, observations and opinions of the places we visited.  Although our trek only took us along a very thin slice of real estate on the planet, it gave each of us a unique perspective of the world, its beauty, and the people and cultures we experienced.  We lived like the locals, shopped in their markets, ate in their restaurants and immersed ourselves in their culture.

We returned to Orlando and our unsold house in mid-December 2008.  It was an amazing adventure and still far from over.   Our plan was to spend the Holidays with family and leave on the second leg of our around the world trek sometime during the first quarter of 2009.  So many unknowns and so little money are typically the job requirements for adventure travelers, which clearly meant we were over qualified.  What made our odyssey unique was that we chose to do it as a family of five - mom, dad and three sons: 17-year old twins and a 15 year old.  The objective was to expose our three teenage sons to the world before they started college.  Because we sincerely believe "Travel is the ultimate education."