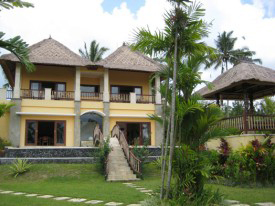 Bali attracts more than 2 million tourists a year -- a number which is expected to grow when the movie version of Gilbert's book is released in August. However, strict Constitutional restrictions on non-citizens directly owning land dampen international interest in real estate.

In June the Indonesian government appeared poised to relax the standards, but it didn't happen.

"Indonesia is very nationalistic," says Jared Collins, an advisor to Ubud Properties, a real estate firm based in Ubud, an inland village of artist's galleries and yoga retreats, the site of Gilbert's escapades.

The government also fears a rush of luxury villa construction at the expense of low cost housing. But there still appears to be momentum toward at least relaxing and clarifying the rules. 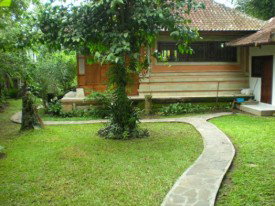 In lieu of freehold ownership foreigners typically lease property, usually for 25 or 30 years, with renewal terms stipulated in the contracts. The primary alternative is putting the property in the name of a local representative, a common practice that would nevertheless send shivers down the spine of a Western attorney.

Most deals focus on land more than houses, Collins says. The elements on Bali quickly destroy even the sturdiest of villas, if they are not properly maintained, often making it easier to tear them down and start over.

Villa prices in the Ubud have steadily increased in the last five years, but land prices have skyrocketed, up 400 percent, Collins says. These days a 5,000-square meter parcel in a nice location in the rice fields near town costs about 150 million rupiah a year, or about $16,600.

Australians and Europeans tend to be the primary buyers, but there is a growing market of Asians and, most recently, Russians, Collins says. Many are surprised to find that Bali's prices are not as dirt cheap as lore.

"A lot of people who come here still have the idea of prices of five to 10 years ago," said Collins, who rented a two-story villa for about $190 a month when he first arrived, five years ago.