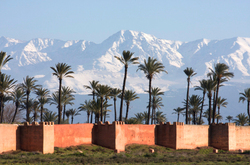 The Moroccan city of Marrakesh ranks as the best value for a second home, based on a recent study of prices in 35 markets around the world.

But some of the best values were surprises. For example, the Seychelles was the fifth best value at £2,185 per square meter, followed closely by markets like St. Lucia in the Caribbean; Sarasota, Florida; and St. Nevis in the Caribbean.

While many markets in Spain have fallen, Mallorca has actually maintained its high values, with houses selling for £7,100 a square meter, the study found.

Unlike the Brit-focused mainland, which has an over-supply of homes for sale, "Mallorca has a large gene pool of buyers," says Charles Weston-Baker, director of Savills' international department. "This gives it a very resilient market."

The study also suggests that top markets continue to hold their value, despite the downturn.

"It's not a surprise that key financial hubs such as Paris, Moscow, Hong Kong or Shanghai generates high values," Savills's researcher Rebecca Gill told the Telegraph. "But it's clear that traditional world-renowned 'lifestyle' destinations such as Cannes and Courchevel continue to attract high-spenders, as does Monaco."