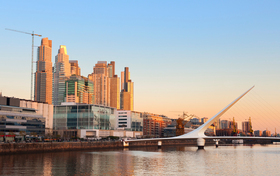 One thing Argentines will be looking to put far behind them as the New Year begins is last year's real estate sector performance.    According to a recent report, real estate activity in 2012 fell approximately 40%, making it one of the sector's worst performing years in the country in a decade.  For transactions related to properties already on the market, activity plummeted nearly 80%.

One reason for the slowdown is that economic growth in Argentina has stalled.  After expanding at a reported rate of nearly 9% in 2011, economic growth for 2012 is expected to amount to less than half of that.  Even taking an optimistic view of consumer demand, industrial production and export prospects, economic growth in Argentina in 2013 will likely not top 3.5%.  This has put significant downward pressure on investment return expectations, the ability of homebuyers to make down payments and pay mortgages and the willingness of banks to lend.

More important, however, is the fact that real estate sellers are increasingly insisting on receiving dollars in the heavily dollarized Argentine real estate market at a time when they are increasingly difficult to obtain.    Argentina has implemented a number of measures to keep dollars in the country, which it needs to service foreign currency-denominated debt obligations and defend the value of the peso.  These restrictions have effectively made it extremely difficult, if not impossible, to obtain US dollars on the open market for the purposes of making dollar- denominated real estate purchases.

Exacerbating the impact of restrictions on obtaining dollars is the reality that Argentine inflation is rapidly eroding the peso's purchasing power.   While there is wide disagreement on the actual rate of inflation in Argentina, the fact is that inflation is destroying economic value at a faster rate than most peso-denominated investments can create it.  As a consequence, persons holding real estate assets, particularly those persons who purchased in cash and are not under pressure to sell, are preferring to either wait for Argentina's economic situation to stabilize or sellers to pay in dollars.

The widening divergence between Argentina's official dollar/peso exchange rate and the price of dollars in parallel currency markets is increasing the reluctance of sellers to hold local currency.  In January of 2012, while the official exchange rate for 1 dollar was 4.325 pesos, the "blue" dollar traded in the parallel market at 4.745 pesos.  One year later, the official exchange rate for 1 dollar was 4.95 pesos while the "blue" dollar traded at 7.25 pesos.   While a portion of the recent spike in the dollar's parallel market value is due to the fact that it is currently summer vacation season in Argentina and Argentine tourists need dollars for trips abroad, it also reflects sentiment that the peso is overvalued.

Given the combination of current market sentiment, a weak economic growth outlook and low foreign investor confidence, it is very difficult to imagine real estate activity picking up sharply in the first quarter.   Apart from political developments, the key issue to watch will be whether or not inflation rates come down, which will take upward pressure off the dollar and give a peso-based real estate market room for development.