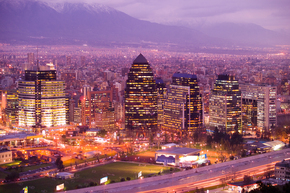 While the construction of the large Costanera Center project in Santiago's gleaming financial district has grabbed a significant amount of attention in the news, the center of Santiago has quietly become a key real estate market.

According to a market study by Montalva Quindos Servicios Inmobiliarios referenced in the Chilean newspaper El Mercurio, the price of new apartments in Santiago Center as of July 2012 reached 36.38 UF (approximately US $1,733) per square meter, the highest level since November 2004 when prices were 30.88 UF (approximately US $1,471) per square meter.

Accompanying price tags at over a seven year high, the number of available units has also fallen significantly.   It was reported that there are currently 6,554 available residential units, a nearly 8 percent drop from the 7,119 units available just six months ago.

In addition, monthly unit sales velocity has increased from a nearly 8 year low in July 2010 of under 6 percent to 12.5 percent in July 2012. There was a particularly noteworthy jump of approximately 3.5 percent in sales velocity between March and July. It has been observed that the area with the greatest sales turnover is the sector bounded by the roads Marcoleta, Vicuña Mackenna, Avenida Matta and San Camilo.

Several factors are driving the increase in sales prices in this part of the city.  From a supply perspective, a key development has been a change to a zoning plan which significantly restricts the height of central Santiago residential projects.   This modification is an important change in development policy after years of efforts to revitalize inner-city development.  This change is causing residential developers to increasingly focus on neighboring areas.

Another important factor has been the increasing congestion of Santiago's roadways.  Due to the scarcity of land for large scale residential projects in central areas, Santiago has witnessed significant degrees of urban sprawl.  Furthermore, rising per capita income following years of Chile's economic expansion, added to increasing housing finance options, has allowed more people to rent or purchase homes in outlying areas that offer quality of life advantages.  These developments, combined with increasing amounts of vehicle ownership and the limited main routes of access from newly expanding residential districts to central business areas, has greatly increased traffic and added to commute times.  Because of this, the center of Santiago has become a more attractive residential area, particularly for single and younger home owners and renters.

The general level of real estate activity in Chile remains high.  The Index of Real Estate Activity prepared by Portal Inmobiliario reached 256.20 points in August, a 40% increase over the same month in 2011.