How much living space do you really need?

Forget all that room for frivolous furniture and dinner parties. A California company argues that so-called "micro-apartments" offer all the space people really need.

The company, Smartspace, is offering 300-square-foot apartments in San Francisco priced at $1,600 a month. In ultra-expensive San Francisco, that is considered a good deal. 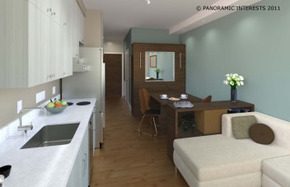 The apartments are cleverly designed to offer all the basic necessities, without using much space. A bed folds down from the wall and table tops pop out to open up space.

The designs are not for everyone, the company acknowledges. But they certainly address the growing need for affordable accommodations in many cities. And Asia and European cities have been offering tiny, overpriced apartments for years.

The company is certainly not alone in touting micro-apartments. In January, New York Mayor Michael Bloomberg announced the winner of a city competition to design a build comprised of nothing but micro-apartments. The winning design will feature 55 units ranging from 250 to 370 square feet.

"Small as it might be, the winning design was chosen for the way that it maximized light, airiness and storage space through the use of 9-foot-high ceilings, large windows, lofts and Juliet balconies," The New York Times reported.

Mayor Bloomberg said he hopes the design competition will spark a wave of tiny apartment complexes.

"We have a shortfall now of 800,000, and it's only going to get worse," Mr. Bloomberg said. "This is going to be a big problem for cities with young people."

"CBS This Morning" featured the Smartspace design in San Francisco: