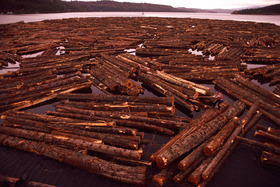 The National Council of Real Estate Investment Fiduciaries (NCREIF)'s timber index, which includes 443 investment grade properties with over 15 million acres and more than $26 billion in market value is a good barometer for the industry, says Jeffrey Havsy, research director at NCREIF in Chicago.

NCREIF's timber index has 317 properties in the South, 86 in the Pacific Northwest, 15 in the Lake States and 20 in the Northeast. While there may be a lot of timberland in other states, it is not covered by NCREIF's timber index, because the land is owned by REITs, such as Plum Creek or Weyerhaeuser, or  large, private owners, instead of investment managers, says Havsy.

The last time appreciation in the timber index was greater than 5% was in fourth quarter 2007 when timberland appreciated by 8.71%, according to the NCREIF report. Even though the index had three consecutive quarters of positive appreciation, it remains more than 5% below its previous peak. The Pacific Northwest continues to be the strongest region with a total return of 10.02% of which .97% was income. This marks the sixth consecutive quarter in which it was the leading region in the index, according to the report.

The lake states (Minnesota, Michigan and Wisconsin) were the worst performing region with a total return of 1.68%. The fourth quarter of 2012 marked the third consecutive quarter that all four regions had positive appreciation, according to NCREIF. There hasn't been three consecutive quarters with all regions having positive appreciation since the first quarter of 2000.
Appreciation, although roughly 5% in the fourth quarter of 2012, was barely positive in the two previous quarters and had been negative nine of the 11 quarters before that, says Havsy. In the first quarter of 2009, appreciation was about 3.5%, he says. For the last three and a half years, the values of the properties in the index were either bouncing along or negative, says Havsy.

The Northwest has more hardwood timber which is used in housing construction, while in the South, the timber is turned into pulp for making paper, says Havsy. The South has not rebounded as much as the Pacific Northwest hardwood forests have, he says. "The export market has helped the Pacific Northwest," says Havsy. "It has been the biggest gainer with regard to exports," he says.

Mary Ellen Aronow, senior forest economist at Hancock Timber Resource Group and chair of the NCREIF Timberland Committee, says that timberland growers in the US have gone through a long period waiting for the housing market to recover. "Chinese log and lumber buyers provided an outlet for US timber grown near western coastal ports, but timber too far from ports has remained in the forest, waiting for a return in domestic demand," she says.

"(In 2012), US southern timber owners were still facing...low prices for their timber. Now, with US housing starts reaching a post-recession high of 954,000 annual units in December--all eyes are on the US market again," says Aronow. "Early gains in production and prices have accrued to US solid wood producers (as opposed to pulp producers), who are experiencing sharp increases in profits as rising demand falls on a much-consolidated industry," she says.