According to RealtyTrac's March and Q1 2014 Residential & Foreclosure Sales Report, U.S. residential properties, including single family homes, condominiums and townhomes, sold at an estimated annual pace of 5,253,464 in March, an increase of 0.4 percent from February and up 8 percent from a year ago.

The median sales price of U.S. residential properties -- including both distressed and non-distressed sales -- was $164,500 in March, up 1 percent from February and up 10 percent from March 2013. March was the 24th consecutive month where U.S. median home prices increased on an annual basis, and the 10 percent annual increase was the biggest annual percentage increase in that 24-month span.

"The housing market showed signs of coming out of hibernation in March after a sluggish fall and winter," said Daren Blomquist, vice president at RealtyTrac. "Median home prices increased on a monthly basis following six consecutive months where they were flat or declining, and increased on an annual basis by the biggest percentage since hitting bottom in March 2012.

"Sales volume also increased slightly from March to February following four consecutive monthly decreases, but both annual sales volume and median prices are still below their recent peaks in October and August respectively," Blomquist continued. "Meanwhile, the distressed share of sales increased from the fourth quarter to the first quarter nationwide and in 38 states, which -- along with many non-distressed homeowners regaining enough equity to list their homes for sale -- is helping to ease low inventory conditions in some markets." 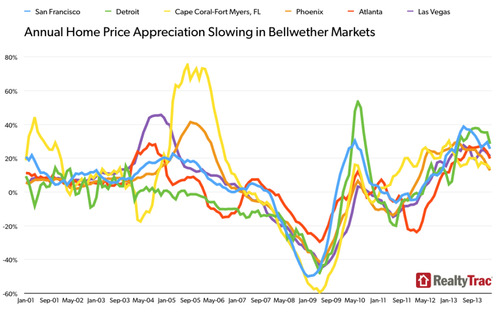 "The Ohio housing market has experienced a noticeable increase in showing activity and contracts, causing home prices to rise and increasing the amount of equity for homeowners throughout the state," said Michael Mahon, executive vice president and broker at HER Realtors, covering the Cincinnati, Columbus and Dayton, Ohio markets, all of which saw double-digit percentage increases in median home prices in March.  "As buyer demand has increased, so too has the number of multiple offer situations.  These multiple offer situations are causing buyers to purchase in cash instead of mortgage financing to increase their negotiation power."

"Home prices continue to appreciate in the Oklahoma market, which is a great sign for current homeowners in the market, but we are not seeing an increase in sales volume," said Sheldon Detrick, CEO of Prudential Detrick/Alliance Realty, covering the Oklahoma City and Tulsa, Okla. market.  "Housing inventory is still low, and we have not had a big increase in buyers because there has not been a surge in available listings."

"Closed transactions in the Denver metro area were down by about 8 percent year over year in March 2014.  I believe this is a direct reflection of the historically low inventory levels we experienced in the Front Range during the first months of 2014," said Chad Ochsner, owner/broker of RE/MAX Alliance, covering the Denver market.  "Thankfully, we are seeing a big increase in the number of homes coming onto the market, which means spring is going to be very, very busy." 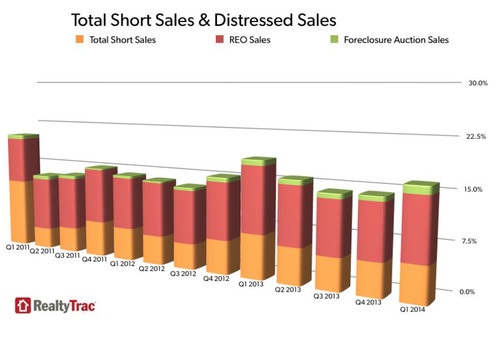 In March, 34 percent of all U.S. residential property sales were to buyers with a different mailing address than the property address -- most likely investors or second home buyers.

Despite the annual increase in residential sales volume nationwide, sales volume in March decreased from a year ago in six states and 21 of the nation's 50 largest metro areas.

Short sales and distressed sales -- in foreclosure or bank-owned -- accounted for 16.4 percent of all sales in the first quarter, up from 14.5 percent in the previous quarter but still down from 18.5 percent in the first quarter of 2013. Metro areas with the highest share of combined short sales and distressed sales were Las Vegas (41.6 percent), Stockton (34.8 percent), Detroit (34.2 percent), Cleveland (34.2 percent), and Dayton, Ohio (33.4 percent).