According to today's S&P/Case-Shiller Home Price Indices, U.S. home prices showed average price increase by 1.5% for the 10-City Composite and by 1.6% for the 20-City Composite in July versus June 2012. For the third consecutive month, all 20 cities and both Composites recorded positive monthly changes. It would have been a fourth had prices not fallen by 0.6% in Detroit back in April.

The 10- and 20-City Composites posted annual returns of +0.6% and +1.2% in July 2012, up from their unchanged and +0.6% annual rates posted for June 2012. Fifteen of the 20 MSAs and both Composites posted better annual returns in July as compared to June 2012. Dallas and Washington D.C. saw no change in their annual rates; and Cleveland, Detroit and New York saw their rates worsen in July, with respective returns of +0.4%, +6.2% and -2.6%. After nine consecutive months of double digit annual declines, Atlanta finally improved to a -9.9% annual rate in July 2012, but still the worst among the 20 cities followed by S&P Dow Jones Indices. 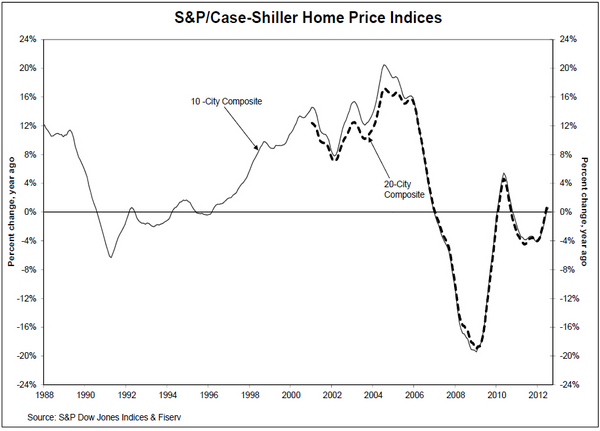 "Home prices increased again in July," says David M. Blitzer, Chairman of the Index Committee at S&P Dow Jones Indices. "All 20 cities and both Composites were up on the month for the third time in a row. Even better, 16 of the 20 cities and both Composites rose over the last year. Atlanta remains the weakest city but managed to cut the annual loss to just under 10%.

"Digging into the numbers, 15 cities and both Composites had stronger annual returns in July's report. New York was the only city with a worse 12-month decline in July than June. Dallas and Washington D.C. saw no change in their annual rates. Cleveland and Detroit saw annual rates decelerate in July versus June, although they remain positive for both cities.

"The news on home prices in this report confirm recent good news about housing. Single family housing starts are well ahead of last year's pace, existing home sales are up, the inventory of homes for sale is down and foreclosure activity is slowing. All in all, we are more optimistic about housing. Upbeat trends continue. For the third time in a row, all 20 cities and both Composites had monthly gains. Stronger housing numbers are a positive factor for other measures including consumer confidence.

"Among the cities, Miami and Phoenix are both well off their bottoms with positive monthly gains since the end of 2011. Many of the markets we follow have seen some decent recovery from their respective lows - San Francisco up 20.4%, Detroit up 19.7%, Phoenix up 17.0% and Minneapolis up 16.5%, to name the top few. These were some of the markets that were hit the hardest when the housing bubble burst in 2006. The 10-City has increased 7.4% and the 20-City 7.8% since their recent lows. The positive news in both the monthly and annual rates of change in home prices over the past few months signals a possible recovery in the housing market." 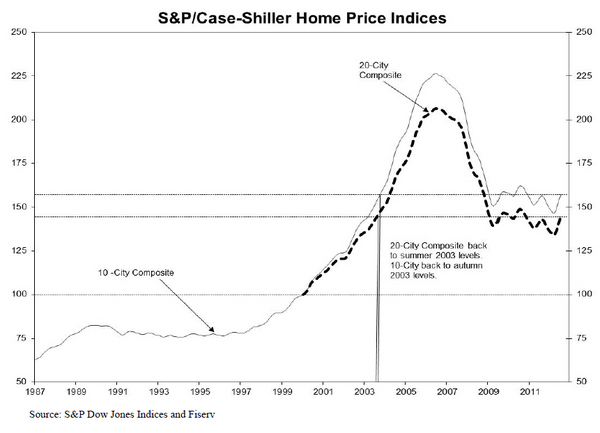 In July 2012, all 20 MSAs and both Composites posted positive monthly gains. Fifteen of the MSAs and both Composites were up 1.0% or more. Miami, with a +2.1% monthly change, was the only city to record a higher monthly gain in July versus June. San Diego had a 1.1% monthly increase in July which is the same as its June gain. The remaining 18 cities and two Composites had lower monthly returns in July versus June, albeit all positive.

Cleveland had finally moved past its January 2000 base level with last month's June report and continued posting increasing levels with a +102.02 print in July.

The table below summarizes the results for July 2012. 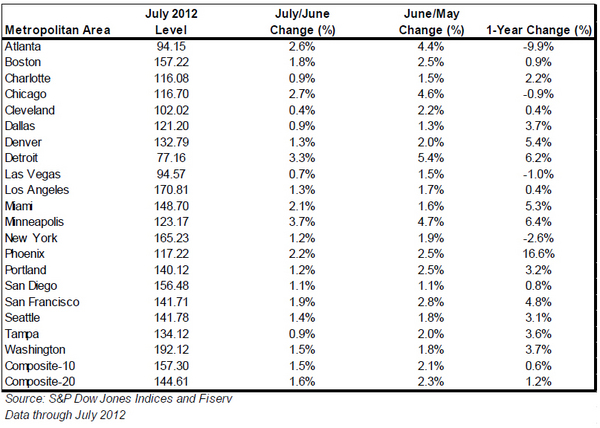