According to international real estate consultancy Cluttons, the current 'wait and see' attitude that has been adopted by potential buyers in Abu Dhabi is a direct result of wider global economic trends, and economic uncertainty caused by the recent US presidential election.

According to findings in the Cluttons Abu Dhabi Property Market Snapshot for Winter 201616/2017, the Abu Dhabi real estate market has experienced further softening in both the residential and office markets.

Faisal Durrani, Head of research for Cluttons said, "We have seen a notable acceleration in the residential market correction as a result of increasing global economic uncertainty and the protracted oil and gas sector's decline, building during Q3 and being further exacerbated as we wait to understand the full impact of Mr. Trump's election as President of the United States of America."

"This, combined with continued market softening across residential and office markets has led to nervousness amongst investors, with many reluctant to commit to purchases until they see signs of stabilization. As a result, we have left our forecasts unchanged with a 10% fall in villa values this year likely to be followed by a decline of around 7% in 2017. Apartments will likely be less severely impacted with a decrease of 4% this year and a further 2% to 3% fall in 2017. The villa rental market will continue to bear the brunt of the widespread slowdown in the creation of senior level jobs, with a 20% drop this year likely to be followed by a 7% to 8% drop next year."

Abu Dhabi's residential market continued to soften during the third quarter with the fall in capital values (-2.4%) outpacing rental declines (-1.0%). On a year to date basis however, rents across the city's residential investment areas are down by 9.4%, while home values have fallen by 5.2%.

Edward Carnegy, Head of Cluttons Abu Dhabi, commented: "Demand has continued to wane over the course of the year, with the primary driver of requirements, the oil and gas sector, still shrinking, and widespread redundancies continuing. Undoubtedly this has undermined demand for property, both for purchase and rent. These factors, combined with the 'wait and see' approach of investors, has been most felt by the top end of the villa market."

Sea view villas on Saadiyat Island (AED 1,850 psf) for instance, have decreased in value by nearly 18% over the first 9 months of 2016, positioning it as the weakest performing market this year, behind mid-range apartments on Reem Island, which are down -11.1%.

For Abu Dhabi's rental market, the top end of the villa market has borne the brunt of a diminishing rate of creation of senior level positions in the capital, while housing allowances have also continued to slip across the board. Like the sales market, high end villas on Saadiyat Island have on average registered a near 25% drop in rental rates between January and September, but early indications from Q4 suggest the rental declines are persisting, which will push the rental falls in this affluent submarket lower still.

More positively for landlords, areas such as Al Reef Downtown, which is perceived to be more affordable than other areas in the city, posted a 16.1% rise in average rents, leaving them at a little over AED 108,000 per annum and bringing them in line with average rents at Hydra Village (AED 105,000 per annum). Although it was last year's stand out performer, driven mainly by its affordability, Hydra Village rents have decreased by nearly 11% between January and September. 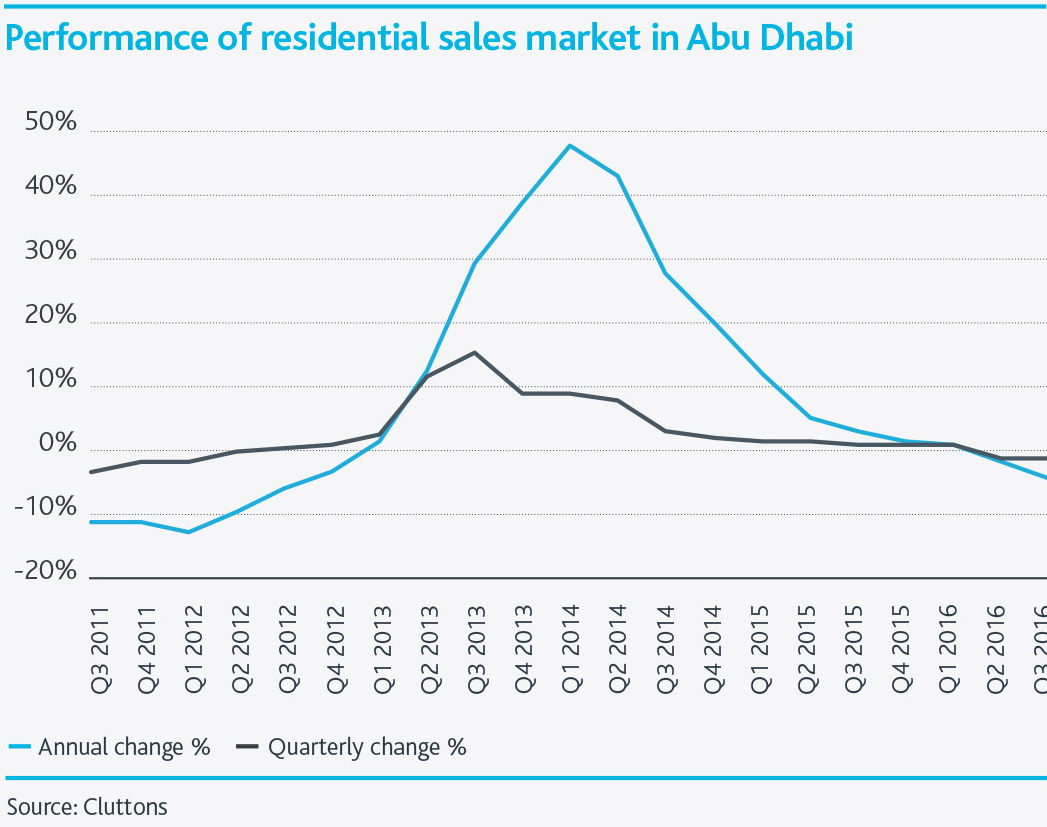 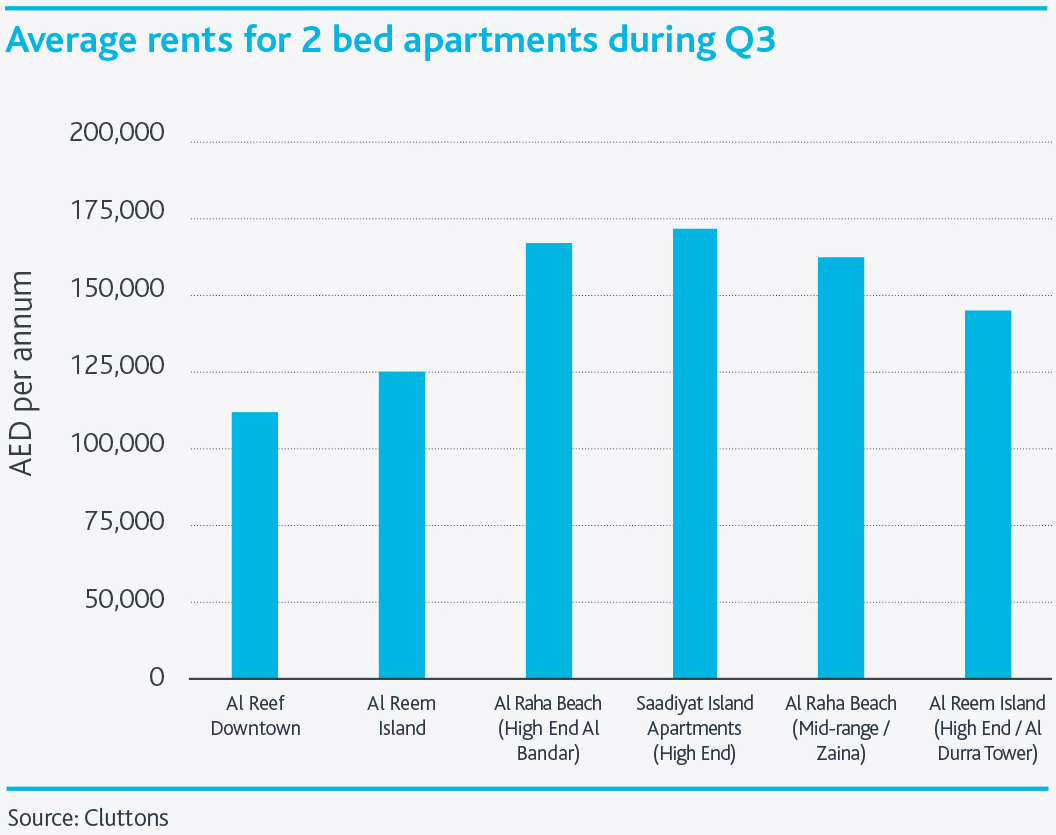 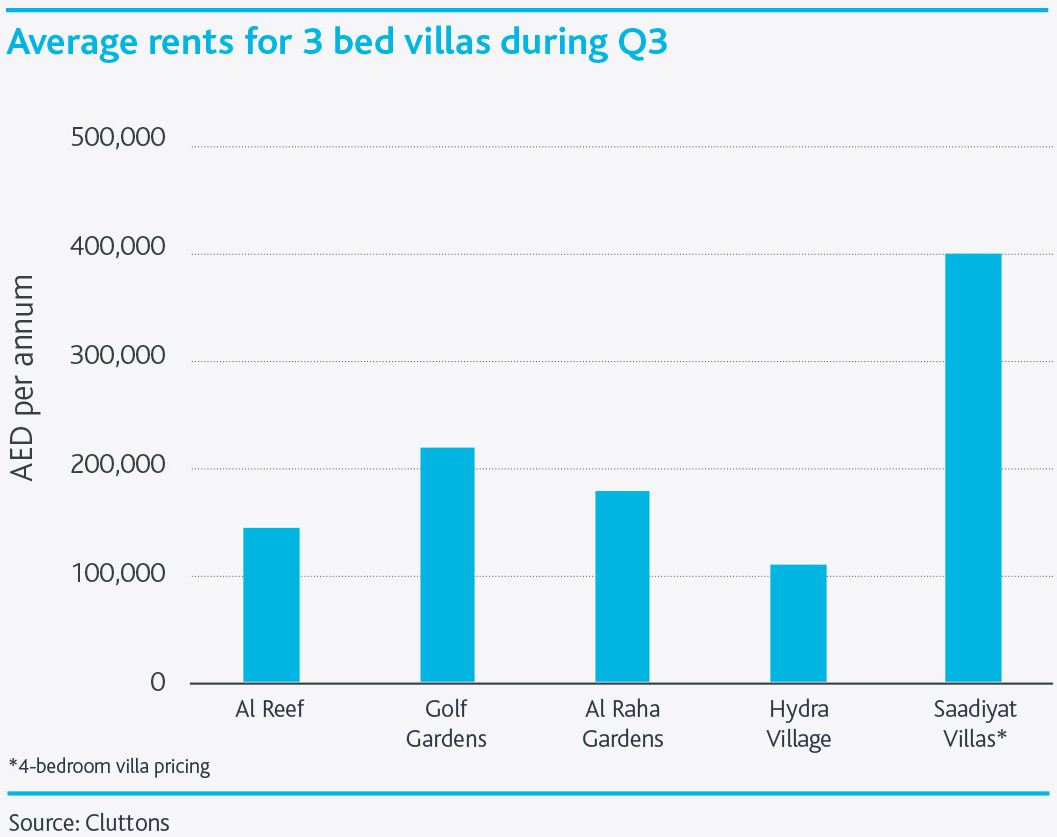