Could be a developer opportunity as well

According to international real estate consultancy Cluttons, the lack of affordable housing in Abu Dhabi provides a major opportunity for developers to fill the gap with 'genuine affordable' housing.

Based on Cluttons' Abu Dhabi 2015/16 Winter Property Market Snapshot, the growing problem of the lack of affordable housing in the Abu Dhabi is incredibly clear, sighting a 34% increase in average house prices since 2010.

Edward Carnegy, head of Cluttons Abu Dhabi, said: "Abu Dhabi is clearly short of affordable neighborhoods. This issue of affordability has been building for some time, initially following the introduction of the Federal Mortgage cap and doubling of property registration fees. These had the desired effect of cooling the market, but now many people are forced to pay premium rents, limiting their ability to become owner occupiers in the long term. This presents a major opportunity for developers to deliver housing that is 'genuinely affordable', while still of a high quality, with the potential to offer flexible access to home ownership through models such as 'rent-to-own'."

Newly planned legislation around fixed quotas for "affordable homes" which may help to ease access to the property market has been drafted; but details are yet to be confirmed. According to Cluttons, the idea of affordable housing has served cities such as London well, where developers are liable to provide affordable housing for developments starting with as little as ten units.

Faisal Durrani, Head of Research at Cluttons said: "In order to truly tackle the problem of affordability, it's important to run the numbers. An average expat household aspiring to purchase a home in Abu Dhabi has to contend with an average annual rent of AED 204,000 against an average household income of AED 199,000. 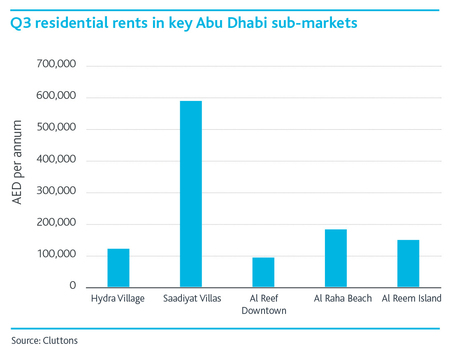 Furthermore, there are signs that a liquidity crunch may be bubbling away in the background. During October, The National Bank of Abu Dhabi reported a AED 56 billion decline in government deposits between September 2014 and September 2015 across the UAE banking system, which is likely to curb mortgage lending, putting home ownership out of reach for many."

Carnegy commented: "Coupled with the Federal Mortgage Caps, this will no doubt curtail the level of mortgages extended to end users, particularly if the era of low oil prices persists, adding to the affordability issue.

"The lower oil prices continues to impact the rate of job creation in Abu Dhabi, which has filtered through to the residential market in the form of weakening demand leading to an unsurprising slowdown."

Durrani explained: "The strength of capital value growth in recent years, coupled with the severity of shortage of stock in the rental market has driven households out to peripheral locations in search of what they perceive to be better value for money. The sheer strain on budgets and the depth of demand for something 'affordable' is reflected in the fact that three-bedroom villas in Hydra Village, for instance, recorded an extraordinary 32% uplift in rents between January and September, compared to just 2.5% for the emirate as a whole.

"There is a clear need for this disparity to be decisively addressed and we look forward to the anticipated legislation on affordable housing".

Carnegy said: "Bulk corporate lets and a flight to locations perceived to be more affordable are helping to sustain rents in general, across the rest of the city."

Carnegy concluded. "The stability in rents is likely to come under increased pressure over the next six months as the hydrocarbon sector, which is the dominant occupier group in the market, contracts further. This could lead to oversupply in the market, not from new space, but from consolidation by corporates returning existing space back to the market."