According to a new report by CBRE, Australian developers pounced on close to $4 billion of inner city residential sites in Sydney, Brisbane and Melbourne in the 12 months to April 2015, with offshore buyers leading the charge.

CBRE's ViewPoint analyzes sales within a five kilometre radius of the CBD's of Sydney, Melbourne and Brisbane. It highlights a dramatic rise in sales activity since 2012, driven by rapid growth in investor demand for inner city apartments.

CBRE Senior Research Analyst, Jacob Fong, commented; "The increase in turnover across these markets is a clear indication of the increasingly strong demand for residential development sites, largely being driven by foreign investment. The buyer demand has transformed the inner city real estate markets in all three cities, where the highest and best use for sites has traditionally been commercial." 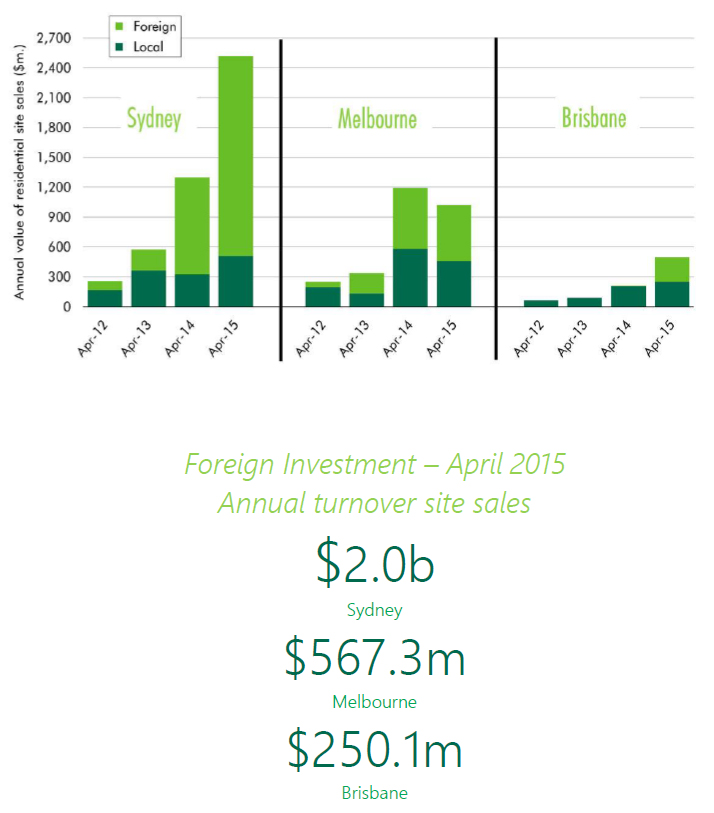 CBRE's ViewPoint highlights that Chinese inbound capital has played a key role in the surge in sales activity, with Chinese developers accounting for 58.4% of the total sales in inner city Sydney, Melbourne and Brisbane in the 12 months to April 2015.

More recently, foreign investment inflows have targeted Australia's inner city new unit sector, triggering even greater development activity. This has been highlighted by an unprecedented escalation in foreign investor activity, with $24.1 billion in Foreign Investment Review Board ('FIRB') approvals in 2014, compared to $8.6 billion in 2013.

"A further factor in the increased level of inner city construction has been a demographic shift across Australia towards smaller households. The traditional preference for detached homes is being challenged, with greater acceptance emerging for smaller units in inner city areas," Mr Fong said.

He also pointed to the fact that inner city unit living was being viewed as a solution for high house prices in capital cities, with the added benefits of reduced commuting times to employment hubs, proximity to public transport and access to high levels of retail amenities.

CBRE's ViewPoint forecasts Sydney's inner city region will remain a key destination in the coming years for residential development, with off-the-plan units continuing to be rapidly absorbed by a combination of local investors and foreign buyers.

Foreign buyers are expected to remain active in the inner city market in the short term, with demand for new units underpinned by Sydney's reputation as a global city. However, the report forecasts that as supply deficiencies in Sydney are addressed, underpinned by accelerating supply pipelines, this may result in slowing rental growth and cooling investor activity in the long term.

However, while new unit demand remains strong, with foreign buyers absorbing most of the new stock - and in some cases accounting over 70% of sales in recently marketed projects - sales of existing unit sales are slowing as foreign investors can only buy new units.

This weakness in the wider unit market is expected to ultimately impact new unit pricing and then flow through to softer development site values.

Across Brisbane's inner city market, the participation of foreign investors has supported development activity and sales for new units according to CBRE Research.

However, over the next three years, a high number of units are expected to be completed in the Brisbane inner city market in areas such as South Brisbane, Fortitude Valley and Bowen Hill, which is expected to put the rental market under pressure and may lead to flat or declining rents.

Development site values are not expected to slow in the short term, as new units continue to be absorbed quickly, but investment fundamentals led by rent movements will gradually feed through to new unit pricing and result in a slowdown in site value growth.

The role of foreign buyers in the new unit market will dictate how rapidly site values slow.  If Brisbane can attract sustained high levels of demand from foreign buyers (traditionally not as active in Brisbane as Sydney and Melbourne), foreign developers, who have been active in the market, are likely to continue assessing development opportunities. This would sustain site values for at least 12 months until the development market begins to show a noticeable decline in value growth.