Rate of Residential Price Declines in Dubai to Moderate in 2017


According to international real estate consultant Cluttons, Dubai's average residential property value is down 7.4% during the past twelve months, but rate of decline is expected to slow heading into 2017 before reaching a new base towards the end of next year.

Cluttons' Dubai Winter 2016/2017 Property Market Outlook report highlights that values slipped by a further 2.6% during the third quarter, leaving them 26.7% below the last market high in Q3 2008. With values expected to stabilize towards the end of 2017, key triggers to slow the decline are likely to continue emerging in the form of infrastructure projects linked to the World Expo in 2020 and other mega projects. These will help to sustain, or lift, public sentiment, which has proved instrumental in keeping the emirate's economic growth profile the most positive in the region.

Murray Strang, head of Cluttons Dubai said: "Although our view of 2017 indicates positive signs to reverse the market's fortunes, we are closely monitoring the level of residential supply coming to the market. With 34,000 units announced this year, it's clear that project announcements are continuing at an unrestrained pace, despite what could be perceived to be challenging trading conditions.

"If supply continues to increase in the next 12 to 18 months, as the global economy remains unstable, it is likely to cause the current stability and projected bottoming out of the real estate market to unravel, with further price falls likely to follow suit. Demand and supply are almost in-sync currently, but this delicate balance can quickly be upset by a supply surge."

Cluttons reports that despite some submarkets heading towards bottoming out, transaction volumes are still weak and reflect the general nervousness around commitments to purchase, while the wider issue of affordability remains a stubborn thorn in the market's side. Quarterly transaction volumes slipped by 21% during Q3, led by a 22% fall in apartment deal volumes, which are down 26% when compared to Q3 in 2015. The average price of a transacted villa has also fallen by 28.1% since the start of the year to stand at AED 3.9 million.

Faisal Durrani, head of research at Cluttons said: "The villa market has continued to soften during the third quarter with values receding by 2.6% following a contraction of 2.5% in Q2, and taking the annualized rate of change to -7.8%. However, this figure conceals the villa market's varied performance during the third quarter, as average prices contracted mainly due to the weak performance of the luxury segment of the market.

"This is down to affordability issues that persist, along with a slowing in the rate of creation of senior level executive position. These two factors combined with a weak, but notable nervousness to commit to more expensive purchases is continuing to drive down villa values across the board. Over the last three years for instance, villa prices have fallen by close to 10%."

Cluttons' report shows that values over the last twelve months at high-end locations such as Hattan Villas at The Lakes and The Palm Jumeirah receded by 11.9% and 11.1% respectively, while more affordable communities such as The Green Community and Jumeirah Village registered no change in values in Q3. Mid-range homes in locations such as Emirates Living, Arabian Ranches, and Victory Heights recorded a negligible 0.1% increase in prices.

In the rental market, Cluttons report shows that after a sharp 4.4% fall in average rents across the city's freehold areas in Q2, which was the strongest decrease recorded in five years, the rate of decline moderated to -1.5% in Q3. The latest change leaves average rents 8% down on this time last year.

Durrani continued: Positively however, apartment rents were unchanged in Q3 across all the submarkets we monitor, hinting perhaps that this segment of the market may be starting to flatten out. On an annualized basis, villa rents are down by 9.4%, while apartment rents are 5.8% lower than this time last year. Similar to the sales market, the top end of the villa market in locations such as the Palm Jumeirah, Jumeirah Islands, and The Lakes have experienced the strongest rental drops over the last 12 months.

Overall our forecast remains unchanged and on track. We still expect residential values and rents to end the year 10% down on this time last year, with any bottoming out unlikely to materialize till next Autumn at the earliest. The change in US leadership may well bring some surprises as well, but this is something we are monitoring closely" 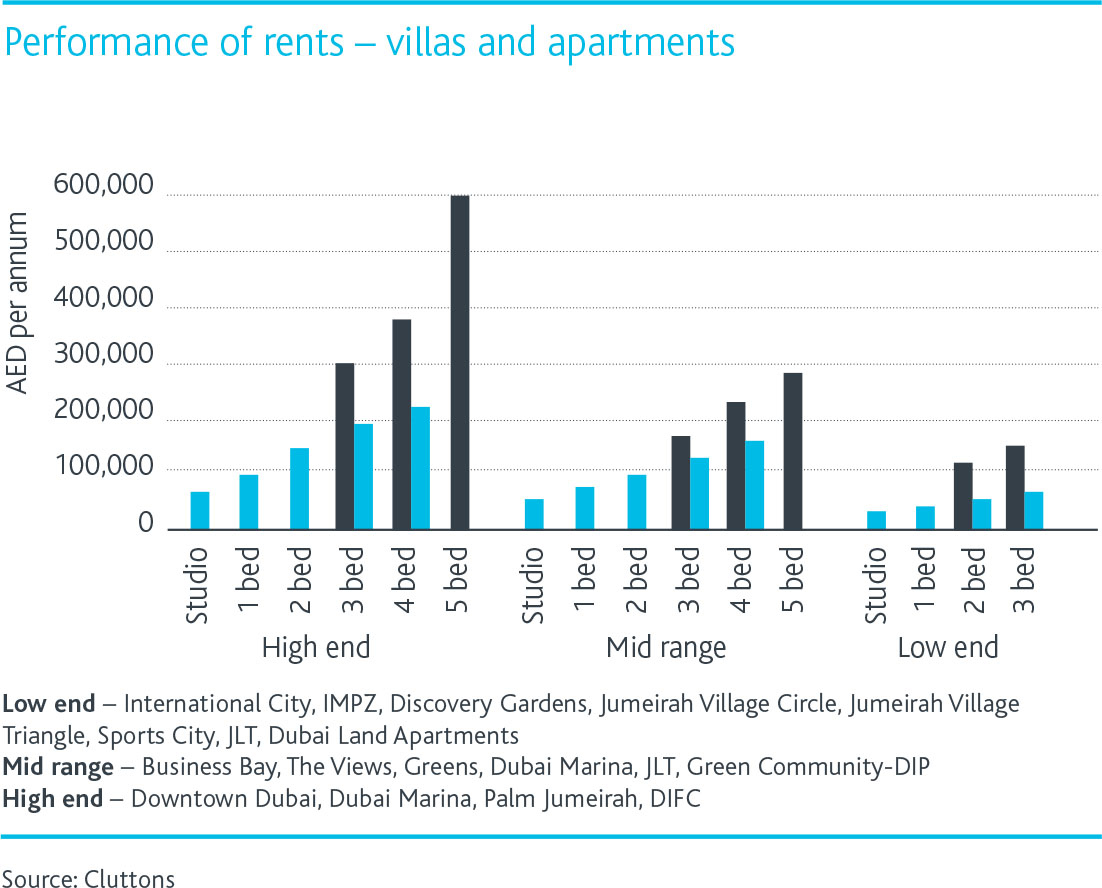 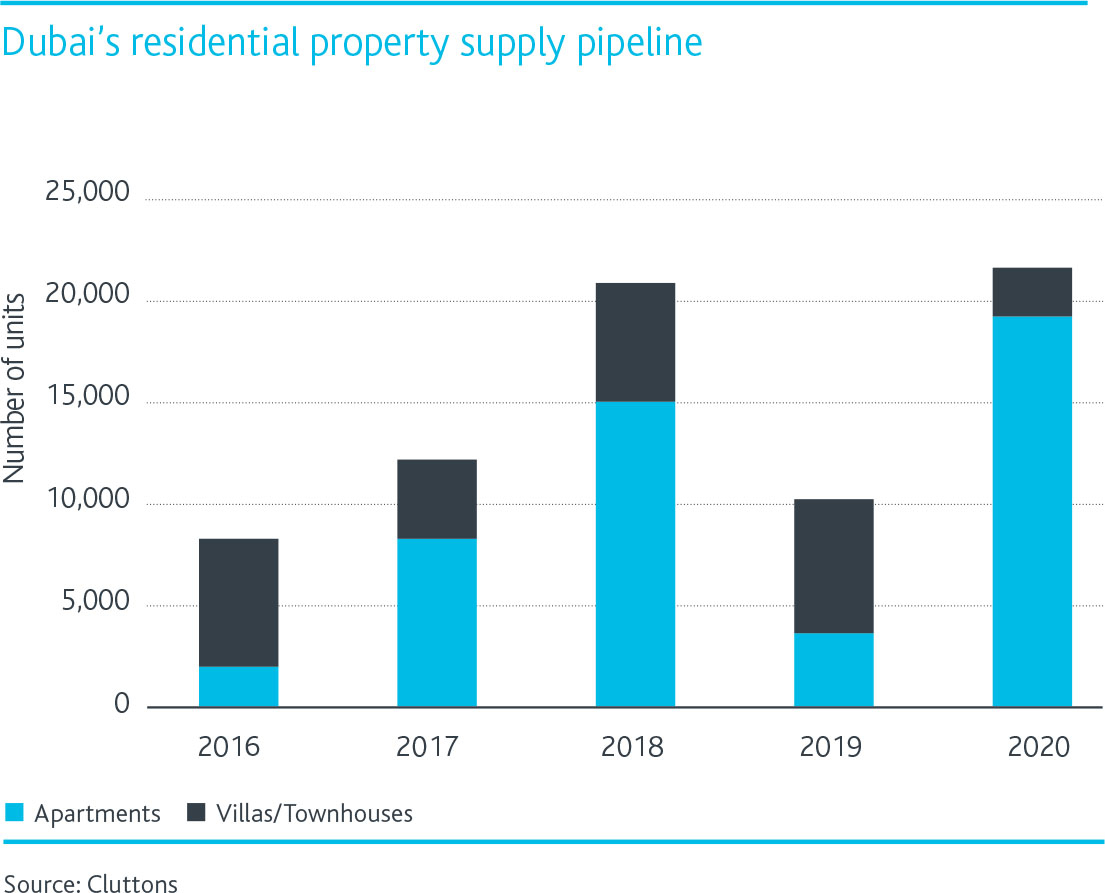 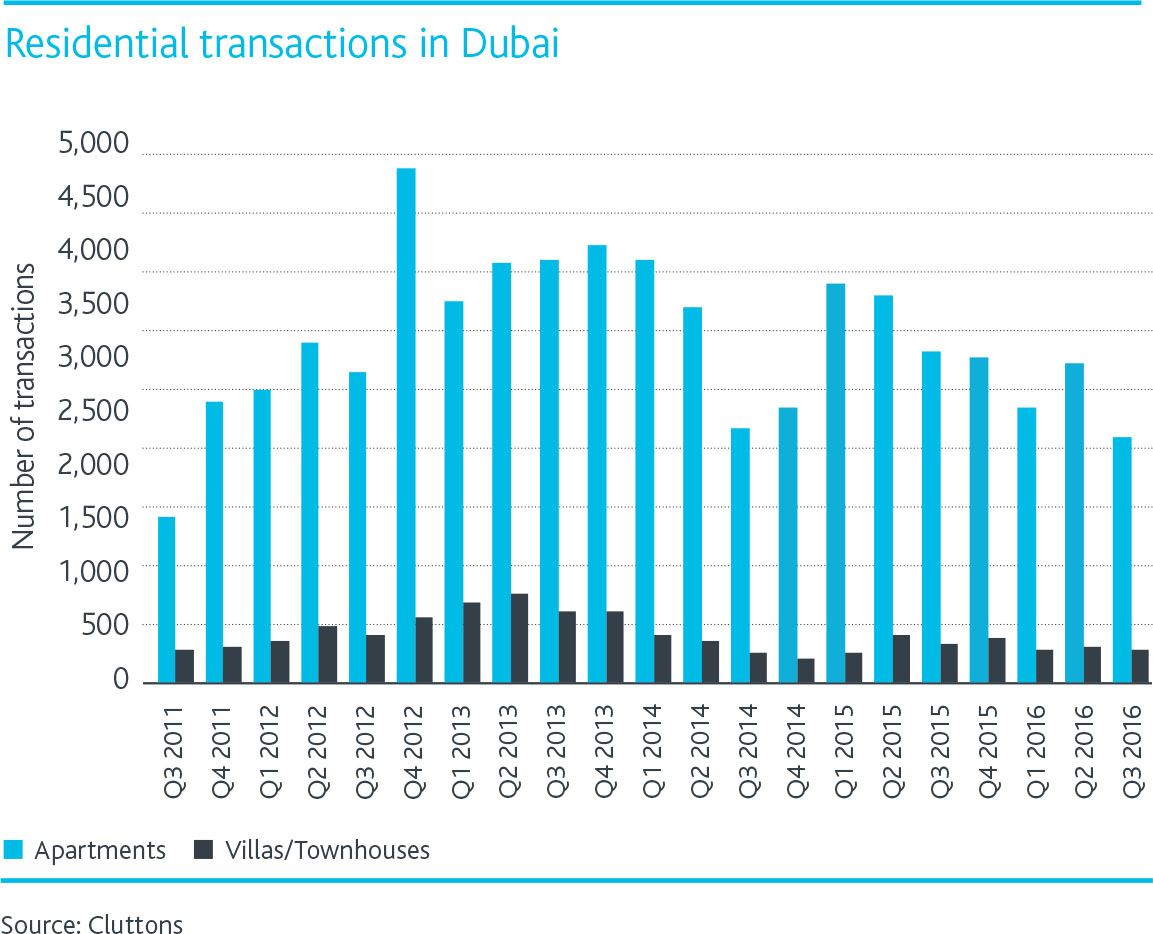