Based on the most recent HousingAnywhere International Rent Index Report for Q2 2020, quarterly rental prices have dropped in Q2 for nearly all European cities. While early signs of the impact of the Covid-19 pandemic on rental prices were already noticeable in the first quarter of 2020, the effects of the travel ban, which was valid from mid-March, are now fully visible.

Rents for single rooms have dropped the most by year-on-year comparison, while prices for apartments and studios are less impacted. This is a result of strengthening local markets: even though demand for these properties has decreased significantly among expats and young international professionals, it remains high among the local inhabitants of larger European cities. More single rooms are left vacant as there is less demand for these properties from international markets. Cities that were less impacted by Covid-19, in countries that were able to reopen their borders in mid-June, are showing smaller drops in rental prices as a result.

Despite the impact on the rental prices being evident, the effects differ per city. London remains the most expensive city to rent in Europe, but the rental price growth seen in the city in recent years is slowing down even further. In Milan, Barcelona, and Berlin, rental prices are now lower than in Q2 2019.

Italian cities are showing the biggest drops in rental prices of all cities featured in the Rent Index. Milan, the capital of Lombardy and the region where the virus struck the country the hardest, saw the biggest decreases in rent of all the cities in the Rent Index. Compared to the previous quarter, one-bedroom apartments dropped by -7,8% to EUR1,096 per month, a drop of -4,6% compared to Q2 2019. Turin, located 140 km from Milan, is showing a quarterly decrease of -7,8% for one-bedroom apartments to EUR 812 per month, a decrease of -5,9% compared to last year. In Florence, rental prices for one-bedroom apartments dropped by -6,9% to EUR 918, a drop of -4,6% compared to last year.

Germany taking action and an optimistic outlook for Spain

Rental prices are dropping for rooms, studios, and apartments evenly for Berlin with -5%. As a popular destination for internationals, the city was hit hard by the travel ban. At the same time, rents have been decreasing since February when the Mietendeckel (rent cap) became active. In an effort to boost the economy after the coronavirus pandemic shutdown, the German government has reduced the VAT for 6 months, from July 1 until December 31st. German VAT rates will drop from 19% to 16% (the regular VAT rate) and from 7% to 5% (the rate applied to food, medical supplies, public transport, et cetera).

Apartment prices in Madrid dropped by -2.3% to an average of EUR1123 per month. With the country opening up again for international travel, rents for June have started to recover to January levels again. For Spanish cities, the longer-term expectations are quite favorable. Spanish economists studying the impact on the real estate market agree that the impact of Covid-19 will be most visible in Q3 of this year. However, they also expect a speedy recovery as there is a high demand for accommodation and the country is in a much stronger financial situation than it was in 2008.

More bang for your buck

As a result of people having to (partly) work and study from home, there is a greater demand for higher quality accommodation, outdoor space, and green areas. Tenants are searching for apartments and studios with plenty of space including gardens and balconies. Tenants are also switching places more, in search of an upgrade from their current place. Accommodation that provides a separate study or work area, or that can offer these facilities near the accommodation, are also highly sought after.

"We currently see a tenants' market, where supply outnumbers demand," says Djordy Seelmann, CEO of HousingAnywhere. "Whether demand will recover, depends on when and to what degree international mobility will return. With a second wave looming, the international rental market remains turbulent. While international student numbers are expected to drop in the upcoming academic year, educational institutions expect programs to return to normality by January 2021."

Despite the rental market shifting towards tenants, many key university cities still have a housing shortage. With the blended approach universities have announced for September, and the high number of enrolments European universities are expecting in January 2021, it remains to be seen how long rental prices will stay at this level or even start increasing again.

3. Rental prices are dropping for rooms, studios, and apartments evenly for Berlin with -5% As a popular destination for internationals, the city was hit hard by the travel ban. At the same time, rents have been decreasing since February when the Mietendeckel (rent cap) became active.

1. In Q2 of 2020, Vienna saw the highest overall year-over-year increase in rental prices: 9.5% for apartments, bringing the monthly rent to an average of EUR 1052, an increase of 3.1% for studios, to EUR 814, and an increase of 0.9% for single rooms, to EUR 478 per month. Similar to our last report, Vienna is ranked first as the city with the biggest increase in rental prices. This is the direct outcome of a changing market in the city, where zoning regulations cause short term providers to make the switch to midterm rental. As a result, there is a big increase in supply in the higher price segment. Mid-March, rental prices started dropping, a trend that continued until the end of May, when the borders of Austria opened up again. Currently, rental prices in Vienna are back to the same level they were in January.

2. Munich saw the second-highest overall increase in rent prices year over year. Apartment prices increased by 2.7% to EUR 1,523. Prices for studios crept up by 1.4% to EUR 1,031 and single rooms by 3.7% to EUR 686. This city, known for its high rental prices and its large shortage of accommodation, continues to be one of the most expensive cities in the Rent Index.

3. In third place ranks Reykjavik, with an increase in rental prices of one-bedroom apartments of 3.6% to EUR 1,081 and studio prices by 14% to EUR 902. The average rental price for a single room increased by 1.7% compared to last year to EUR 625.

4. Average rental prices for one-bedroom apartments rose in Rotterdam by 1.2% to EUR 1,302 per month. Studio prices increased by 2.4% to EUR 803, and prices for single rooms saw an increase of 2.2% to an average of EUR 559 per month. This is the second time Rotterdam is featured in the list of cities with the biggest increases in rental prices. However, the pace at which prices are increasing has been slowing down since Q3 2019. 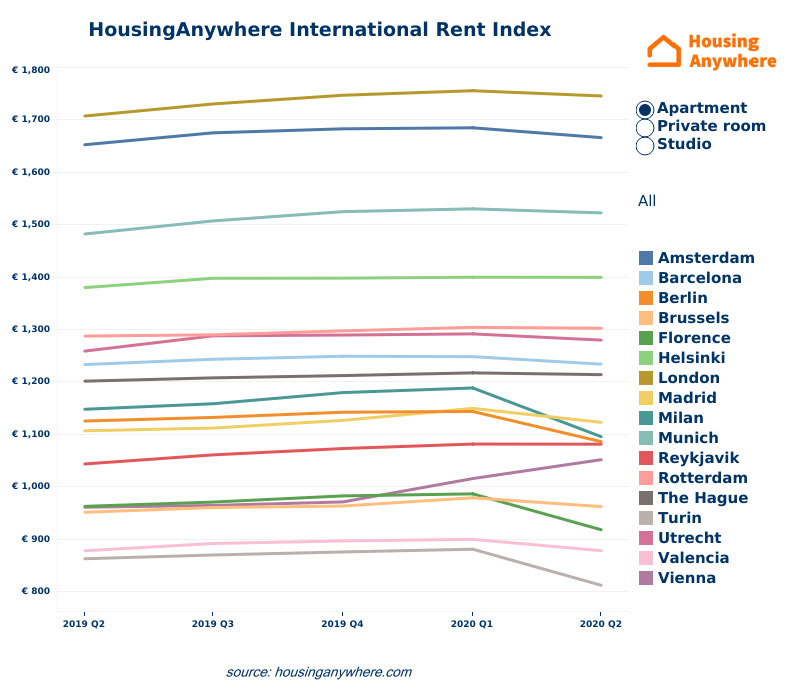 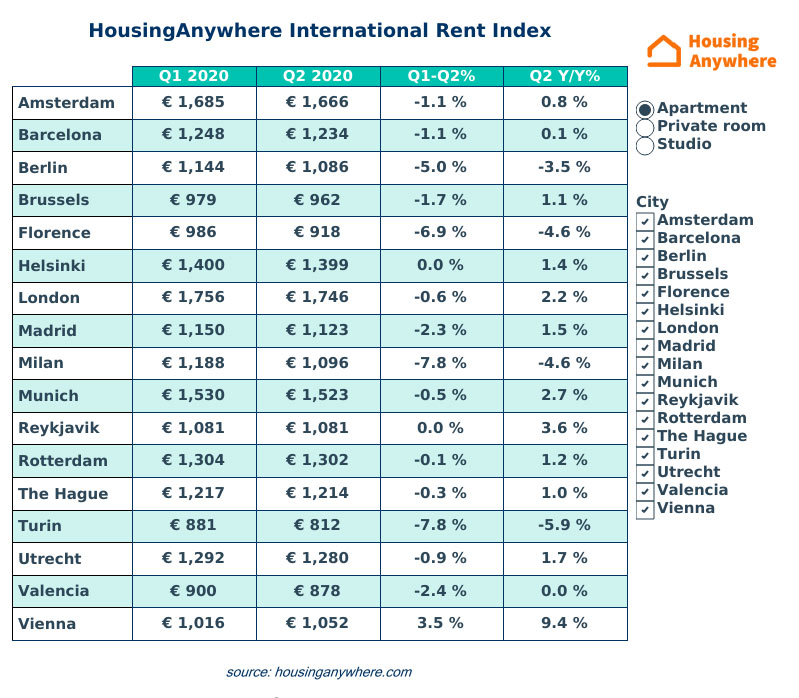 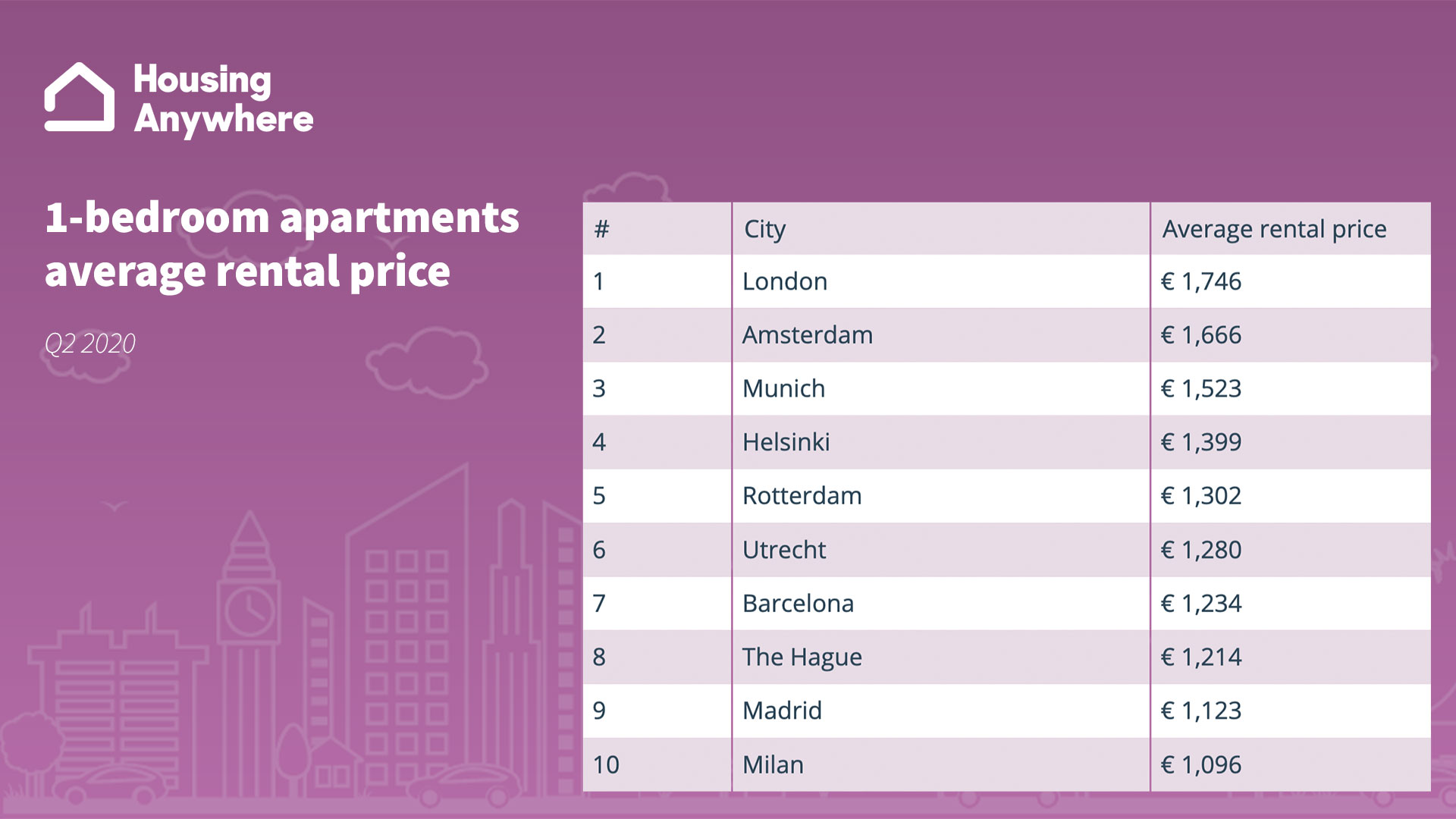