According to CBRE's newly released Global Living Report: A City by City Guide, Hong Kong continues to hold its position as the world's most expensive residential location with an average of $1,416 per sq. ft.

Following Hong Kong are London and New York with an average property price of $1,025 per sq. ft. and $842 per sq. ft., respectively. From across the region, Singapore and Tokyo made the top ten list of highest value locations in fifth and sixth place with $810 and $697, respectively. 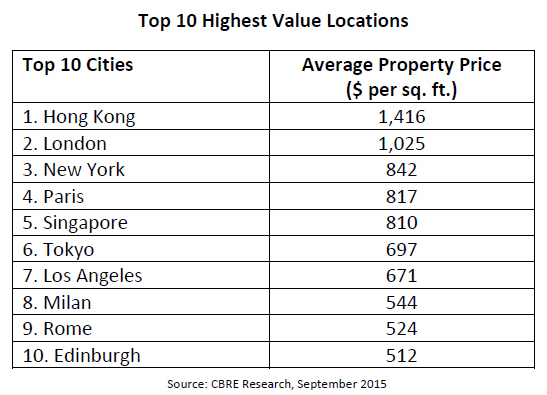 Dr. Henry Chin, Head of Research, CBRE Asia Pacific, comments, "while Hong Kong has cemented its place as the world's most expensive location according to average price per sq. ft., we have seen the majority of cities across the region with a strong bounce-back in the residential sector following the global financial crisis. As the world's population expands and the overall international economy continues to grow, we believe both factors underpin the fundamental demand for our region's residential market. In Asia Pacific, residential property markets are becoming more integrated due to globalization and migration--people are now sharing culture and ways of living with new audiences."

The Global Living Report provides a snapshot of 31 global cities, showcasing the differing influences in each city and providing a comparative study of house prices, rental growth and living costs, among other factors. Below are the cities across the Asia Pacific region:

Bangkok - The colorful city of Bangkok is very affordable in terms of costs of living and currently has a very low unemployment rate of 1.1%. The luxury market is performing well, with a 30% increase in prices for off-plan condominiums. Prices for older developments are stable as the majority of Thai buyers prefer new stock to existing building projects.

Beijing - Second only to Shanghai as China's most populated city with 22 million residents, the population of Beijing is expected to increase by 16% in the next decade. A series of stimuli from the government to boost the residential market have had the desired effect, with sales volumes increasing by 25% over the quarter.

Hong Kong - This vertical city has the highest average property price across the sample, at $792,480 ($1,416 per sq. ft.). Despite the introduction of a special Stamp Duty and tightening of mortgage lending policies, prices have continued to increase, rising 13.5% in 2014 and 7.2% in the first five months of this year.

Mumbai - India's largest city, Mumbai is home to 12,544,000 people, yet this still accounts for just 1% of India's population. These days, the general Indian economy is robust; it is the world's third-largest economy and experienced 7.3% GDP growth over the last year with a further 7.5% growth expected over the coming year. Although the rental market is strong, rents fell slightly (by 1.8% last year) and now stand at $1,496 per month in key locations of Mumbai, this compares with a national average of $1,306 per month.

Shanghai - Home to 24.3 million people (and due to increase by 13.3% over the next decade) Shanghai is one of the largest cities in the world. Government interventions following the booming market in 2013 led to a slowdown in house price growth. In March 2015, the People's Bank of China lowered the minimum down payment for first-time buyers and upgraders, stimulating demand and causing a pick-up in sales values.

Singapore - A strong economy and the attractiveness of Singapore as a place to live has created a strong housing market, which until last year was increasing by an average of 8% per year over the past decade. Government interventions have affected current prices and Singapore is now expected to have a lower growth market than before. Prices remain high, with average property prices at $889,200--the top end of the CBRE sample.

Sydney - The concentration of banks in Sydney has led to the city becoming recognized as one of Asia Pacific's leading financial hubs. High demand and long-term undersupply have driven up housing prices however this undersupply is now being addressed, with 39,114 home approvals in 2013-14. Average house prices in Sydney increased by 12.9% last year and are 38% higher than the national average.

Tokyo - Tokyo is home to the largest metropolitan economy in the world and its urban area had a total GDP of $1.9 trillion in 2012. The housing market was affected by the global financial crisis but rebounded in 2010. Under half of Tokyo's population is owner-occupiers and whilst average prices are $412,466, the relatively modest size of the properties translates to a fairly high $697 per sq. ft. 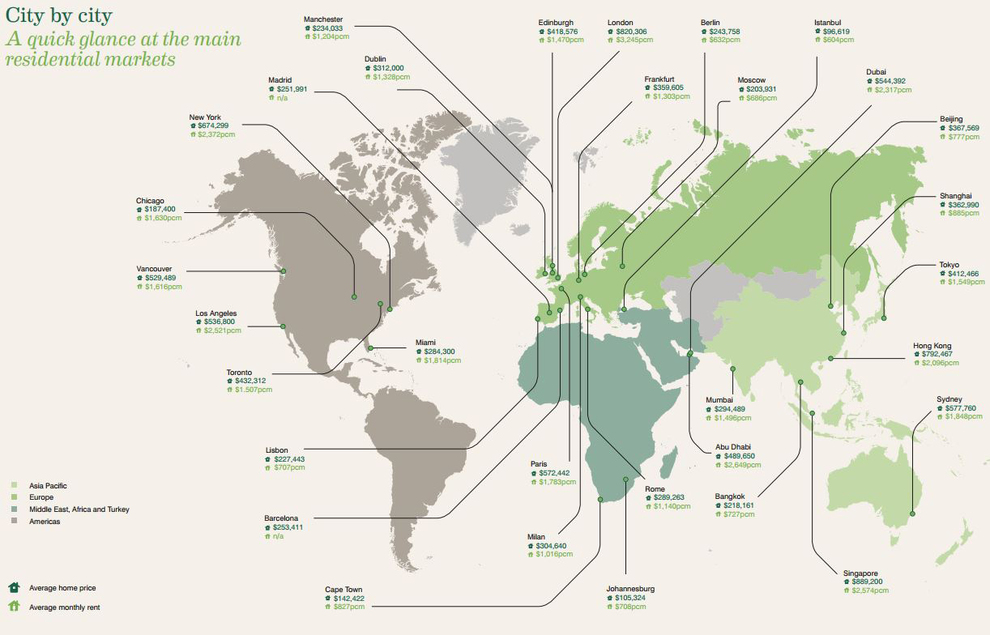