According to a new report by Paladin Realty Partners, a Latin American institutional investment manager dedicated primarily to funding affordable-middle class home building projects; after showing resilience during the 2008-09 global financial crisis and experiencing a robust recovery in 2010-11, economic growth has significantly moderated in Latin America's leading economies of Brazil, Mexico, Colombia, Peru and Chile. Brazil's GDP contracted in the 3% range in 2015 and is expected to contract an additional 3% in 2016, compared to minimal growth of 0.1% in 2014.1 Brazil is experiencing its most pronounced recession since 1990 and, while painful, this should bring needed adjustment and reforms to Brazil's economy. Paladin is forecasting the recession in Brazil to continue through 2016, with a modest resumption of growth in 2017 as inflationary pressures ease. The growth outlook for the Andean region and Mexico is much better; each country's GDP expanded in the 2% to 3% range in 2015, with slightly higher growth (3% to 4%) expected in 2016 and 2017.

Paladin further states that growth in South America's economies in recent years has been adversely affected by the end of the commodities super-cycle boom as China's economy slows and continues to transform from investment-led growth into a more consumption-oriented economy. In addition, expectations of rising interest rates in the United States have hurt investor confidence in all emerging markets, including Latin America. We believe much of this fear is already largely priced into the currencies and markets. 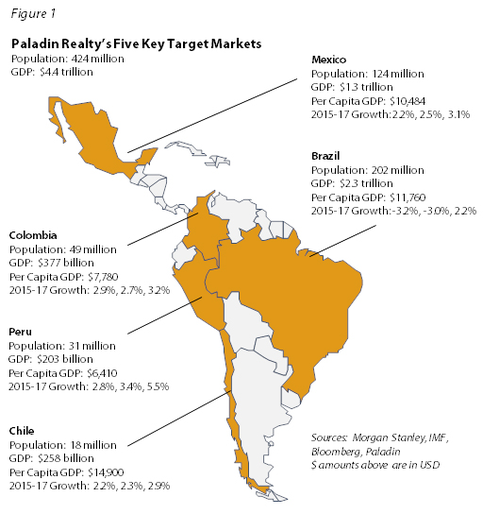 Despite moderating growth, Latin America continues to offer investors an attractive, defensive approach to target opportunistic returns (20%+ Gross IRRs) with good visibility, low leverage and downside protection - either as part of a global diversification or tactical growth strategy. Indeed, Latin America represents one of the more compelling long-term, large scale growth opportunities in the world today, given the region's attractive demographics, including a large population exceeding 400 million in Paladin Realty's five target countries of Brazil, Mexico, Colombia, Peru and Chile. Most importantly, demand for modern real estate product (particularly low- and middle-income housing) remains supported by highly-visible and sustainable market trends, including demographic tailwinds, steady household formation, and a middle-class that is expected to expand over time due to productivity gains and economic growth.

Development and investment activity continues to be constrained by the region's inefficient capital markets and the limited availability of debt and equity capital for real estate. As a result, superior returns can be targeted for select real estate investment strategies with substantially lower debt than most opportunity funds. Indeed, leverage on Paladin's prior Latin America investment vehicles has averaged 10-20% of cost, thus providing attractive risk-adjusted target returns and more certain preservation of capital for opportunistic investors. In addition, Brazil's current stagnant economy, distressed public homebuilder sector, high interest rates, and over-supplied Class A+ office market are creating unique opportunities for select distress and deep value-added transactions over the next few years. The thesis for Latin America becomes even more compelling (particularly for USD-based investors) when one considers the fact that local currencies are at their most attractive levels in more than a decade.

The foregoing Paladin Realty proposition contrasts sharply with the thesis behind many of the high return real estate strategies in more developed global markets, such as the United States, Europe and Asia, which depend on high levels of inexpensive debt to achieve opportunistic returns. 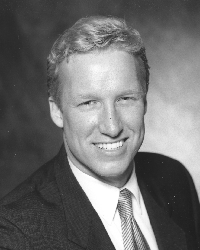 Paladin COO Fred Gortner tells World Property Journal, "Despite moderating growth, Latin America offers an attractive defensive investment approach to target opportunistic returns with excellent visibility, considerable scale, and project-level economics that are far superior than the rest of the world, namely high profit margins and very low leverage.  The real estate outlook for Mexico and the Andean region is quite strong, supported by steady GDP growth, favorable demographics and huge pent-up demand.  The recession in Brazil is creating distress opportunities to acquire high quality assets at well below replacement cost.  Lastly, today represents one of the most attractive entry points in the past two decades for USD-investors."

Despite slowing growth in recent years, Brazil, Mexico, Colombia, Peru and Chile continue to benefit from a convergence of long-term demographic, economic and political trends that are expected to support sustainable growth in demand for housing and other modern real estate product over the next two decades.

These Latin American trends include: