According to a new report by Savills, Singapore's private residential market has been characterized by low sales volume but holding prices in 2014. The market is expected to carry into 2015 in the same fashion, barring any tweaking of the cooling measures and toning down of the Total Debt Service Ratio (TDSR) framework.

From Savills' viewpoint, the following is expected for Singapore's Residential market in 2015:


If one accepts this analogy, buyers will return to the market. The zillion dollar question is when? It may not be that long because since the implementation of TDSR on 29th June 2013, by the first half of 2015, the workforce will have enjoyed two pay increases, one for 2014 and the other for 2015. On top of that 2 bonuses would have been paid out. The store of wealth is definitely increasing. In the meantime, the measures have been static. Barring a deflation of sentiments due to any cataclysmic event, fundamentals should prevail. Perhaps in 2015, there may be defining project that may bring about a pivotal reversal of sales volume.

Savills believes the line of argument, that the gamut of new completions would soften rents, leading to yield compression and a potential sell off by weak holders when interest rates rise, is overly simplistic. Yes, rents are expected to remain soft but so too are interest rates in the foreseeable future. Even if yields are to compress another 50 basis points, it doesn't mean that owners will be forced to sell. The pressure to sell will only happen if the unemployment rate goes up. That is not the likely scenario and in turn, the argument of falling rents leading to a wave of force selling is not a likely scenario either. The following chart shows a high degree of co-relation between the URA Property Price Index for completed non-landed properties and the Employment rate. 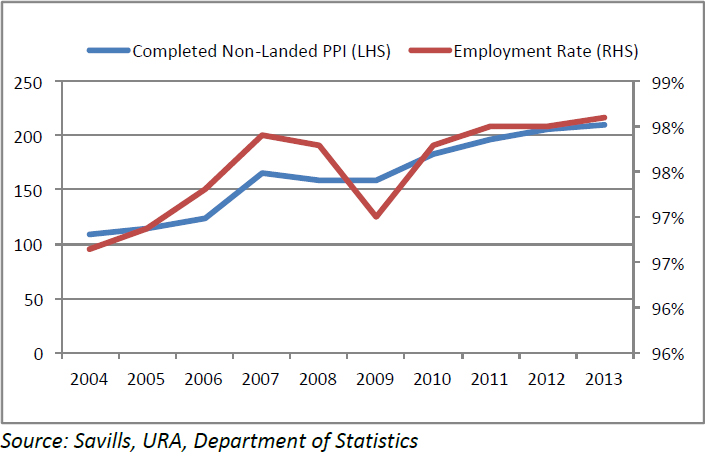 On the other hand, the recent relationship between prices of completed non-landed properties and the spread between the yield of a luxurious non-landed property and the Singapore Government 10-year bond is trivial. 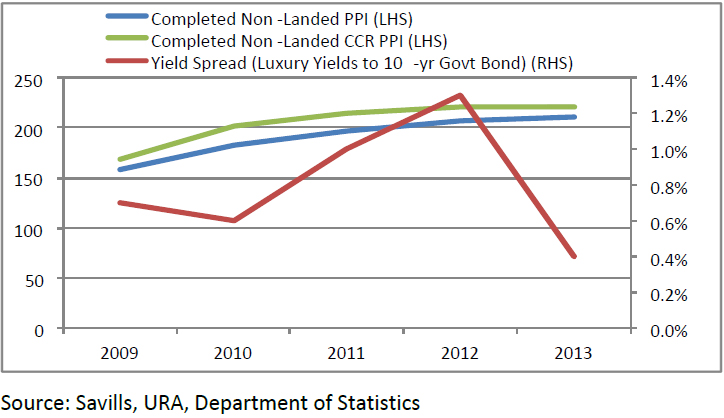 Savills concludes with the prediction that Singapore's private residential market is expected to remain soft in 2015 with primary launches holding prices better than those in the resale market. Rents are expected to continue to decline due to the slew of new completions and limited budgets amongst overseas nationals working here. Corporate belt tightening and organisational revamps may result in less family units arriving. Small format homes, HDB flats and individual rooms in private developments may be the more lettable unit types both now and in 2015. Although yields are expected to compress further, prices may not react to this because the better driver of prices appear to be other economic factors like the unemployment rate which is still expected to remain low in 2015.

While Savills believes the market in 2015 continues to mull over the TDSR and the slate of cooling measures, the amount of household liquidity building up in the backdrop could rouse buyers and surprise everyone on the upside.