According to international property consultant Knight Frank, home prices in higher-value areas of London have responded to resurgent levels of activity this summer despite the Coronavirus pandemic.
Prices grew by 0.3% in prime central London, the highest monthly rise since July 2015, the month that also marked the last high-point for prices in PCL. After a bounce that followed the May 2015 general election, the impact of a stamp duty hike in December 2014 began to put downwards pressure on prices, an effect subsequently compounded by years of political volatility.

It was a similar story in prime outer London. Average prices rose 0.5% in August, which was the highest rise since June 2015. The quarterly rise in POL was 1%, which compared to flat prices in PCL. The out-performance in POL reflects the growth in demand for outdoor space and greenery since the lockdown was lifted.

But prices have fallen by 17% in Prime Central London since the summer of 2015, while the equivalent decline in Prime Outer London was 13%.

Such declines are more marked than anywhere else in the UK, which underpins our belief that there is scope for price rises in future years.

In addition to this recent weak performance, buyers in higher-value markets are more likely to be protected from the economic fallout of the pandemic, including any labour market weakness and tighter lending conditions.

The lifting of international travel restrictions will further boost prime London markets, particularly in areas popular with overseas buyers such as Knightsbridge and Mayfair. Prices in both markets were flat in August after respective annual declines of 4.5% and 5.8%.

This relaxation of travel rules may coincide with more buyers acting on the fact that a 2% stamp duty surcharge will be introduced for overseas buyers next April. Given the average time for a property to exchange was around four months in PCL in 2019, this is likely to become a more central concern for buyers in coming weeks.

Despite uncertainty over what Q4 will bring, activity levels have been strong over the traditionally quieter summer months as pent-up demand is released. The number of offers accepted during August was the highest total in more than 20 years. 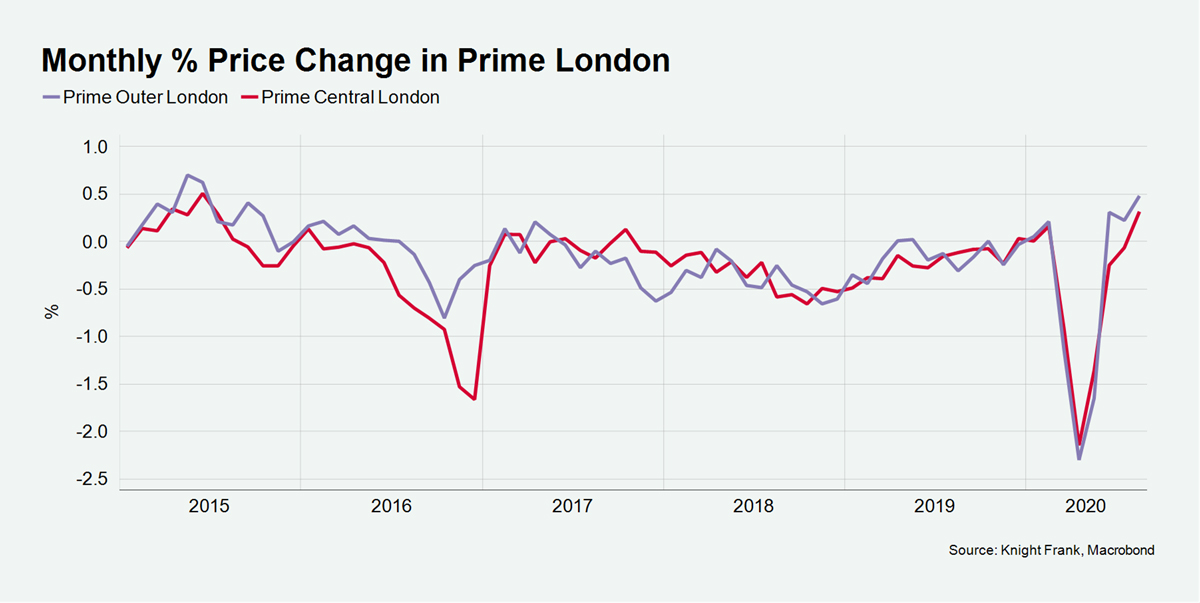