Over the course of a normal year, activity in the UK housing market can generally be split into the two periods of spring and autumn. This year, it will divide neatly into four calendar quarters.

According to international property consultant Knight Frank, the first quarter of 2021 saw the false start of a stamp duty holiday that was deferred four weeks before it was due to expire at the end of March 2021. The second quarter will bring the end of the holiday for many in June while the third quarter will see the tapered rate disappear in September. There will be no holiday during the final quarter.

In effect, 2021 will be a case study for how differing rates of stamp duty impact the property market.

Knight Frank says the holiday is part of the government's attempts to boost the UK economy as it recovers from the pandemic. A maximum stamp duty saving of £15,000 will taper from the end of this month to £2,500 in September. So far, its impact has been substantial.

UK transaction numbers reached a record level in March, the month of the false start, taking the total annual spend in the housing market to levels not seen since before the global financial crisis. Sales that had been lined up to complete went ahead anyway, irrespective of the announcement on 3 March that the end of the holiday had been deferred.

Knight Frank further reports transaction numbers then fell by 36% in April, provisional HMRC data shows. It was the third largest monthly decline on record even though it followed a deadline that did not ultimately materialize. The biggest monthly drop was recorded in April 2020 as the country entered its first national lockdown. The second largest decline was in April 2016, the month a 3% stamp duty surcharge was introduced for second-home owners and landlords. The fourth largest drop was in January 2010 following the end of a previous stamp duty holiday.

The impact of stamp duty on transaction numbers is clear. Indeed, there are parallels between 2016 and 2021, with both years experiencing a spike in March followed by a drop in April, as the chart below shows. Ahead of the stamp duty holiday expiring on 30 June, there is every reason to believe there will be a second large spike in transactions this month.

One lesson from 2016 to consider as we attempt to anticipate what happens when the holiday ends is that tax deadlines can put off prospective sellers, some of whom will opt to wait until market conditions normalize.

In the ten years between 2009 and 2019, the number of market appraisals only fell once between February and March - in 2016. Appraisals, which are a leading indicator of new supply, normally build over the first quarter of the year. While the average monthly increase between February and March was 13% over the decade, there was a 15% fall in 2016.

This hesitation partly explains the imbalance between supply and demand that has been a feature of the UK property market this year.

The end of the stamp duty holiday is one reason that supply should therefore start to build later this year and house price inflation return to single digits.

It is a safe conclusion that there will be fewer transactions in July than June. However, the extent of any decline in Q3 will be mitigated by the fact fewer people will take overseas holidays this summer, as well as other regional factors, which we shall explore in more detail in future.

Only by the fourth quarter, barring any unforeseen events, will the monthly swings in transaction numbers start to look a lot less dramatic, concludes Knight Frank. 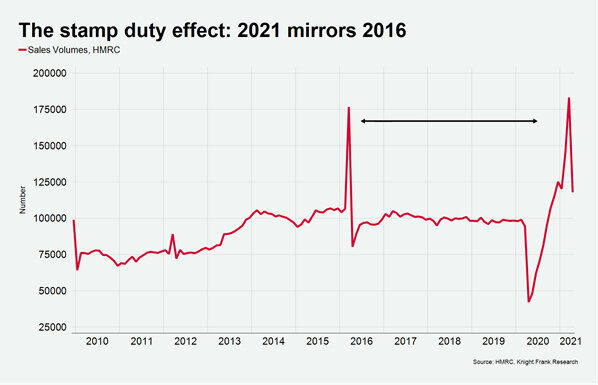