Equity grew more for people who bought homes in primarily asian and hispanic neighborhoods--by $79,000 and $67,000, respectively.

For the purposes of Redfin's report, a neighborhood is considered primarily one race or another if more than 50% of the owner-occupied households are black, hispanic, asian or white, as identified in the U.S. Census Bureau's American Community Survey. They calculated home-equity gains throughout 2020 for each neighborhood type for homeowners who purchased a home anytime during 2019, using January 2021 Redfin Estimates as a proxy for current market value.

The terms "black homeowner," "white homeowner," etc. are used throughout the report to refer to a person who bought a home in a neighborhood of primarily one race or another in 2019. 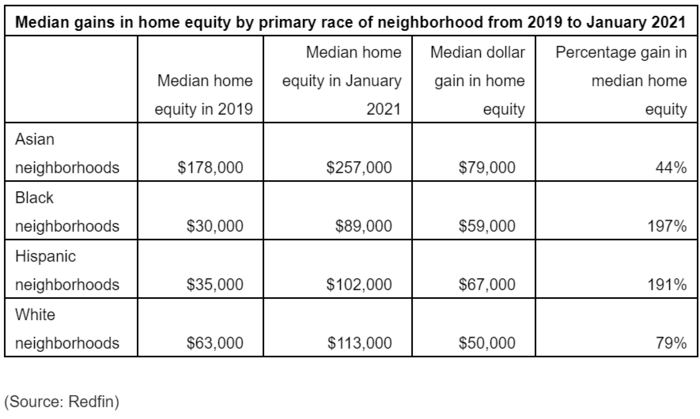 While black homeowners gained more wealth through home equity than white homeowners last year, the trend is a reversal from the previous decade, when homeowners of color saw their home values and home equity recover more slowly from the Great Recession.

People who bought homes in primarily black neighborhoods in 2019 currently have a median of $89,000 in home equity, the smallest amount of the four races included in this analysis. That's compared with $257,000 for asian homeowners, $113,000 for white homeowners and $102,000 for hispanic homeowners.

Black homeowners started with much lower equity--a median of $30,000 in 2019--than their asian ($178,000) and white ($63,000) counterparts, and slightly less than the typical hispanic homeowner ($35,000). The difference in equity in 2019 was primarily driven by the fact that black homebuyers made smaller down payments than buyers of other races, due to lower home prices and putting down a smaller percentage of the sale price.

Even though black homeowners still have less equity than white homeowners, the home-equity gap between black and white Americans is narrowing. That's largely because significant gains in home values, which increase equity above initial down payments, fueled equity gains from 2019 to January 2021 for homeowners of all races. The typical homeowner in a primarily white neighborhood had $33,000 more home equity than the typical homeowner in a primarily black neighborhood in 2019, a gap that had shrunk to $24,000 by January 2021.

Homeowners in black neighborhoods experienced a nearly 200% home-equity increase in 2020, a huge increase that's mostly due to low equity pre-pandemic 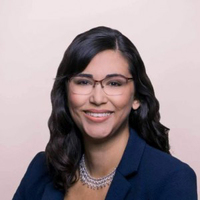 "Black homeowners benefited from 2020's hot housing market, and the trend is continuing into this year as Americans remain intensely interested in relocating and buying homes and home values continue to rise," said Redfin Chief Economist Daryl Fairweather. "But less than half of black Americans own the home they live in, so most of the Black community didn't benefit from the enormous wealth homeowners have gained in the past year. Especially compared with the three-quarters of white Americans who own their homes, the total benefit for black families across the country is relatively small. With higher unemployment rates and less overall wealth, black families were not as likely as white families to buy homes even when prices were comparatively low."

"Now that prices are so high and the pandemic has contributed to high unemployment, especially for black workers, it's even more difficult for people who don't already own homes to break into the housing market," Fairweather continued. "There is a major need and a big opportunity for policymakers to enact programs like down-payment assistance and zoning reform to help narrow the homeownership gap and enable more black families to build wealth through home equity."

Black homeowners in Chicago, Newark and Washington, D.C. have seen enormous home-equity gains, mostly because equity was so low pre-pandemic

People who bought homes in primarily black neighborhoods in Chicago in 2019 experienced the biggest percentage equity gain of the metro areas included in this analysis, with a 750% increase from 2019 to January 2021. The increase is so big partly because median home equity was just $8,000 in 2019, compared with $68,000 in January 2021.