According to RealtyTrac's U.S. Foreclosure Market Report for October 2015, foreclosure filings -- default notices, scheduled auctions and bank repossessions -- were reported on 115,134 U.S. properties in October 2015, an increase of 6 percent from the previous month but still down 6 percent from a year ago. The report also shows one in every 1,147 U.S. housing units with a foreclosure filing during the month.

"We've seen a seasonal increase in foreclosure starts in October for the past five consecutive years, so it's not too surprising to see the monthly increase this October," said Daren Blomquist, vice president at RealtyTrac. "However, the 12 percent increase this October is more than double the average 5 percent monthly increase in the past five Octobers, and the even more dramatic monthly increases in some states is certainly a concern. The upward trend in foreclosure starts in those states in some cases could be an indication of fissures in economic fundamentals driving more distress and in other cases is more likely an indication of long-term delinquencies finally entering the foreclosure pipeline."

October foreclosure starts increased from the previous month in 34 states, including California (up 21 percent), Florida (up 13 percent), New Jersey (up 15 percent), Illinois (up 20 percent), Maryland (up 300 percent), Washington (up 34 percent), and Michigan (up 37 percent).

There were a total of 36,582 properties repossessed by lenders (REOs) in October, down 9 percent from the previous month but up 31 percent from a year ago -- the eighth consecutive month with a year-over-year increase in REOs. Despite the annual increase, REOs in October are about one-third of their peak of 102,134 in September 2010. Through the first 10 months of 2015 there have been 369,920 completed foreclosures, up 33 percent from 277,815 REOs during the same time period in 2014.

"Foreclosed properties are still up against the same circumstances that any other seller in this market faces which is fair market value and beyond," said Al Detmer, broker associate at RE/MAX Alliance, covering the Greeley market in Colorado. "Bank owned property asset managers are still requesting top dollar and today's market demand is responding in their favor. Diamond in the rough distressed properties are the find for the cash heavy buyer that can fulfill a fix and flip fantasy and be the chicken dinner buyer to secure the deal for the near future."

A total of 46,698 U.S. properties were scheduled for foreclosure auction during the month, up 12 percent from the previous month but down 22 percent from a year ago.

Scheduled foreclosure auctions -- which can be foreclosure starts in some states -- increased from a year ago in 17 states, including New York (up 47 percent), Massachusetts (up 45 percent), North Carolina (up 24 percent), New Jersey (up 17 percent), and Maryland (up 3 percent).

"I'm not surprised to see that foreclosure activity in Seattle has dropped again. Home prices continue to rise and the economy is growing at a rate well above the national average. So, what's a buyer to do if they're looking for a good deal in Seattle's hyper competitive market?" said OB Jacobi, president of Windermere Real Estate, covering the Seattle market.  "One of the best tips is to have your agent search for homes that have been on the market for more than 14 days. When a home doesn't sell quickly buyers wonder what's wrong with it and sellers become discouraged. And this can lead to finding that hidden gem that everyone else has overlooked."

Illinois foreclosure activity increased 21 percent from the previous month, and the state posted the nation's fifth highest foreclosure rate: one in every 680 housing units with a foreclosure filing.

"Coupled with increases in home equity, and an increasing job market, the level of foreclosures continue to decline across much of Ohio for the month of October," said Michael Mahon, president at HER Realtors, covering the Cincinnati, Dayton and Columbus markets in Ohio. "New job sectors involving banking, education, and healthcare are creating added employment opportunities that are increasing the demand and need for housing across the state."

October marked the 4th consecutive month where the Atlantic City, New Jersey metro remained in the No. 1 spot for having the highest foreclosure rate among metropolitan statistical areas with a population of 200,000 or more. One in every 257 Atlantic City housing units had a foreclosure filing in October, more than four times the national average. Atlantic City foreclosure activity in October increased 14 percent from previous month -- driven by a 26 percent monthly spike in foreclosure starts -- and increased 134 percent increase from a year ago.

Foreclosure activity in October increased 177 percent from a year ago in Columbia, South Carolina, and the metro area posted the nation's second highest foreclosure rate: one in every 333 housing units with a foreclosure filing.

Foreclosure activity increased 118 percent from a year ago in Trenton, New Jersey, and the metro area posted the nation's third highest metro foreclosure rate: one in every 390 housing units with a foreclosure filing).

"We continue to see the year-over-year decline of our South Florida distressed real estate market," said Mike Pappas, CEO and president of the Keyes Company, covering the South Florida market. "Any new bank owned inventory is quickly digested, as our under $300,000 priced inventory is at the lowest level in years." 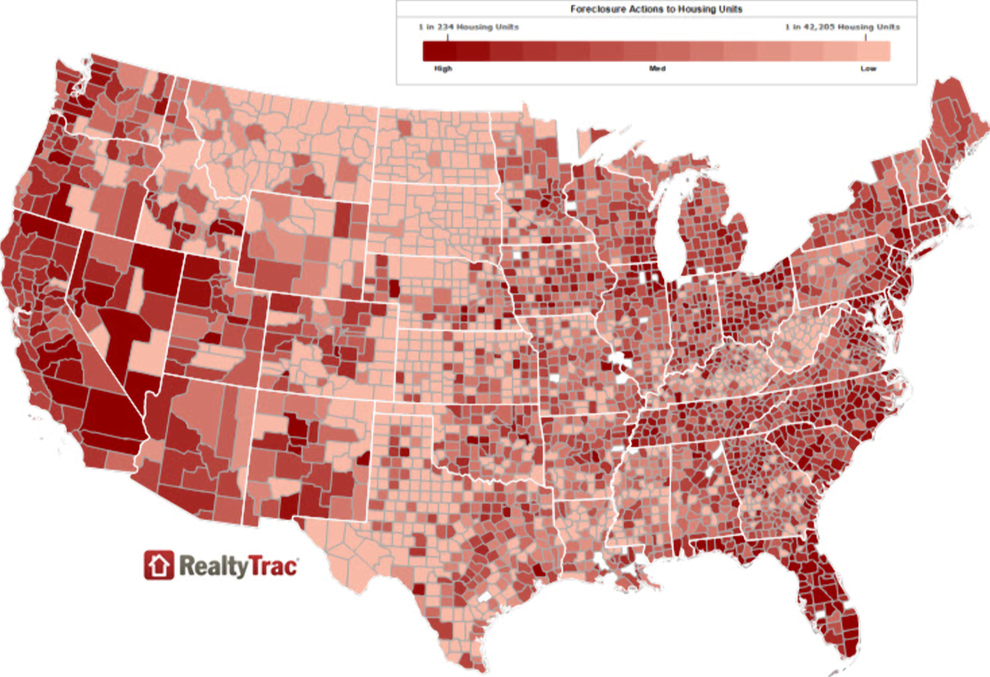