There was a notable departure from the past several quarters' trend of Sun Belt strength. The Q3 RentRange data identified emerging rental rate increases among the Rust Belt in areas like Pittsburgh, St. Louis and a trio of Ohio markets: Cleveland, Cincinnati and Canton. Interestingly, Florida and California, whose markets have long dominated the ranking of highest increases, saw their top 25 list representation reduced by half in Q3 2016 compared to Q3 2015. Florida, in particular, is seeing rent increases finally stabilize nearly a decade after the housing crisis. One trend that remains the same, however, is the notable single-family rental rate growth in already expensive areas with robust, expanding economies and tight inventory. Seattle, San Francisco and Portland all moved up on the list despite discussion of rents and real estate markets having plateaued, for example.

Looking at average gross yield, which demonstrates income return from an investment prior to operating costs, the top five performers are all in the Rust Belt with yields ranging from 12.6 percent in Cincinnati to 15.3 percent in Cleveland. This region is followed by Dallas-Fort Worth at 11.9 percent and several markets in the Southeast, including Winston-Salem, Atlanta, Knoxville and Charlotte, which are experiencing double-digit yields.

"The emergence of rental rate increases in several Rust Belt markets is creating a unique opportunity for single-family rental market investors to pursue both property value increases and high yields," said Wally Charnoff, chief executive officer, RentRange Data Services. "For years, the Rust Belt has produced strong yields, but tepid property price appreciation has kept rents relatively flat, forcing investors to choose between property appreciation or yield. Strengthening economies in those markets combined with below average inventory and home buying challenges, such as home buyers struggling to obtain mortgages, are creating the perfect environment for rental investors. At the same time, markets like Seattle and San Francisco offer less yield than these markets since prices are already very elevated." 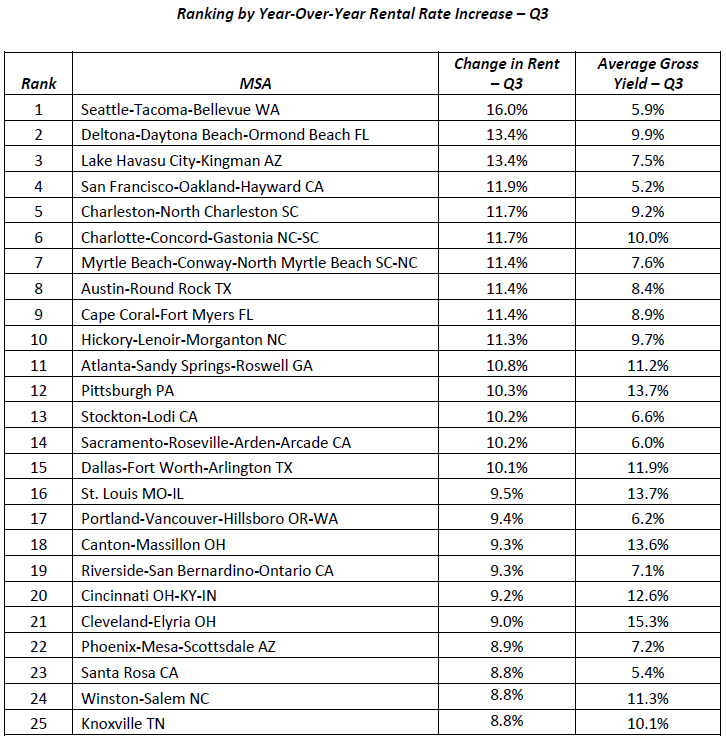