U.S. Home Prices Continue to Rise in May, Flatten on Monthly Basis


Home prices made solid gains in May 2015, according to a new S&P/Case-Shiller Home Price Indices report released this week, as U.S. home price growth appears to be largely flattening out after a long, uneven recovery.

Denver, San Francisco, and Dallas reported the highest year-over-year gains among the 20 cities with price increases of 10.0%, 9.7% and 8.4%, respectively. Ten cities reported greater price increases in the year ended May 2015 over the year ended April 2015. New York and Phoenix reported six consecutive months of increases in their year-over-year returns since November 2014. Year-over-year returns in New York increased from 1.3% in November 2014 to 3.0% in May 2015, and Phoenix climbed from 2.0% to 3.8% in the same period.

"As home prices continue rising, they are sending more upbeat signals than other housing market indicators," says David M. Blitzer, Managing Director and Chairman of the Index Committee at S&P Dow Jones Indices. "Nationally, single family home price increases have settled into a steady 4%-5% annual pace following the double-digit bubbly pattern of 2013. Over the next two years or so, the rate of home price increases is more likely to slow than to accelerate. Prices are increasing about twice as fast as inflation or wages. Moreover, other housing measures are less robust. Housing starts are only at about 1.2 million units annually, and only about half of total starts are single family homes. Sales of new homes are low compared to sales of existing homes.

"First time homebuyers are the weak spot in the market. First time buyers provide the demand and liquidity that supports trading up by current home owners. Without a boost in first timers, there is less housing market activity, fewer existing homes being put on the market, and more worry about inventory. Research at the Atlanta Federal Reserve Bank argues that one should not blame millennials for the absence of first time buyers. The age distribution of first time buyers has not changed much since 2000; if anything, the median age has dropped slightly. Other research at the New York Fed points to the size of mortgage down payments as a key factor. The difference between a 5% and 20% down payment, particularly for people who currently rent, has a huge impact on buyers' willingness to buy a home. Mortgage rates are far less important to first time buyers than down payments." 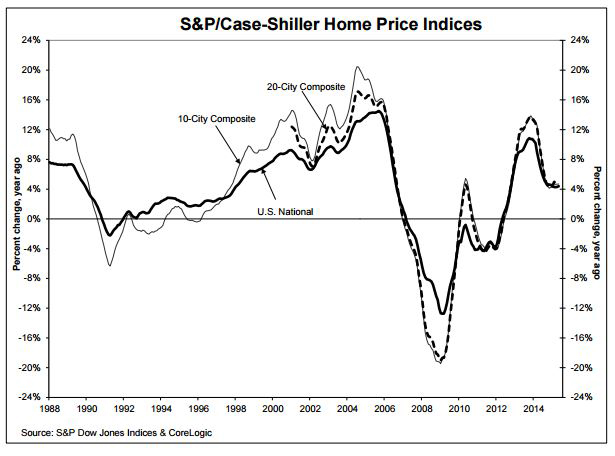