Residential News » Irvine Edition | By Monsef Rachid | May 16, 2019 9:01 AM ET
Signup for Our Weekly Newsletter »
Yet Foreclosure Starts Spike in Washington, Florida, Oregon and Louisiana

According to ATTOM Data Solutions April 2019 U.S. Foreclosure Market Report, U.S. foreclosure filings -- default notices, scheduled auctions and bank repossessions -- were reported on 55,646 U.S. properties in April 2019, down 5 percent from the previous month and down 13 percent from a year ago for the 10th consecutive month with an annual decline.

Lenders started the foreclosure process on 30,524 U.S. properties in April 2019, down 5 percent from last month and down 10 percent from April 2018 -third consecutive month with an annual decline.

States that posted annual decreases in foreclosure starts in April 2019, included New York (down 43 percent); Nevada (down 36 percent); Colorado (down 34 percent); Maryland (down 31 percent); and Michigan (down 25 percent).

Those major metropolitan statistical areas with a population greater than 500,000 that saw a large annual increase in foreclosure starts from last year included Orlando, Florida (up 90 percent); Miami, Florida (up 45 percent); Columbus, Ohio (up 35 percent); Portland, Oregon (up 31 percent); and El Paso, Texas (up 22 percent).

Counter to the national trend 17 states had an annual increase in foreclosure starts. Those states included Washington (up 38 percent); Florida (up 34 percent); Oregon (up 22 percent); Louisiana (up 12 percent); and Georgia (up 11 percent).

Nationwide one in every 2,433 housing units had a foreclosure filing in April 2019.

Lenders completed foreclosures (REO) on 11,078 U.S. properties in April 2019, down 9 percent from the previous month and down 22 percent from a year ago - a 6thconsecutive annual decline.

States that saw a double-digit annual decline in REOs included Alabama (down 45 percent); Arizona (down 38 percent); North Carolina (down 32 percent); California (down 20 percent); and Nevada (down 14 percent).

Counter to the national trend, 10 states posted year-over-year increases in REOs in April 2019, including Washington (up 53 percent); Connecticut (up 22 percent); Kentucky (up 19 percent); and New York (up 3 percent). 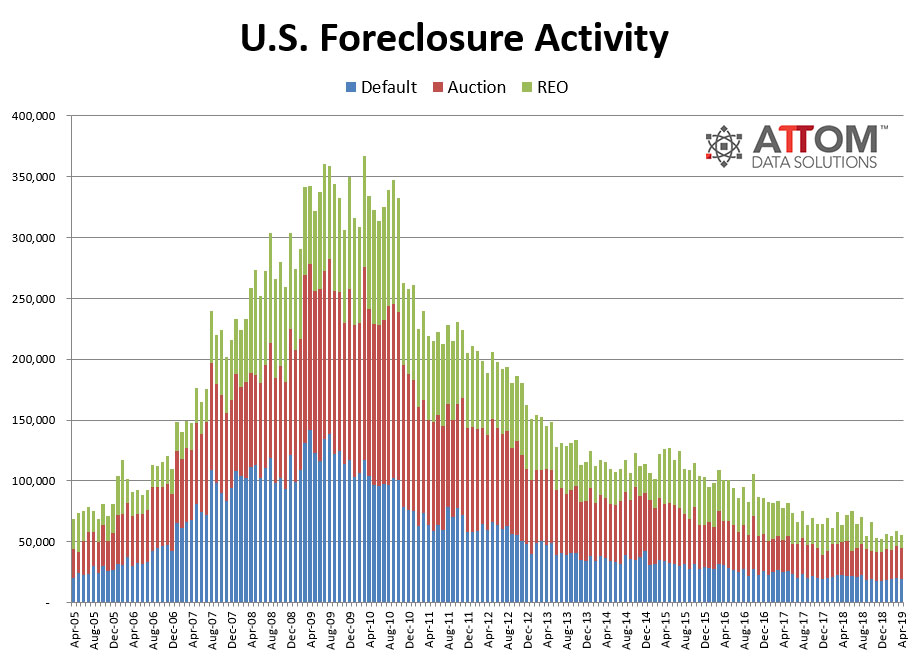