Small Investor Home Buying on the Rise in U.S.

According to new research from CoreLogic, U.S. home purchasing activity among investors is on the rise. In 2018, the share of home sales bought by investors reached its highest level in two decades. However, this increase isn't from big institutional buyers, but rather from smaller investors just getting into the game. What's more, these investors appear to be focusing in the starter-home tier, giving first-time homebuyers a run for their money while also chasing homes in markets with relatively high rents.

CoreLogic reports smaller investors are responsible for increasing investor homebuying activity. This is in sharp contrast to the rise in large institutional investors in the years following the recession. When looking at investor activity based on the total number of properties purchased over our study period, we found small investors - those who purchased 10 homes or less between 1999 and 2018 - have increased their share of homebuying more than large- and medium-sized investors. These so-called "mom-and-pop" investors grew from 48% of all investor-purchased homes in 2013 to more than 60% in 2018. Large investors - those who purchased more than 101 homes - nearly doubled their activity between 2000 and 2013 but have pulled back since the foreclosure crisis and now sit at 15.8% of purchases. Medium-sized investors - those who purchased between 11 and 100 homes - have also seen their share steadily fall, from a peak of 30% in 2010 to 22.7% in 2018.

Furthermore, investor purchase rates were much higher among the starter-home tier of the home sale price distribution. The share of starter homes purchased by investors peaked at over one-in-five homes over the past two years, with a rate of 20.3% in both 2017 and 2018. These rates are 2-3 times the investor purchasing rates of move-up (middle tier) and high-end (upper tier) homes that also peaked in 2018 at 7.8% and 6.3%, respectively.

Investor Activity Highest in Eastern Half of the U.S., Lowest in West

CoreLogic also found investor homebuying rates vary sharply across the country, with the highest rates east of the Mississippi River and the lowest rates to its west. Each of the top 10 metros with the highest investor purchase rates is in the eastern half of the country, with Detroit, Philadelphia and Memphis, Tennessee leading the pack at 27%, 23.3%, and 19.7%, respectively. Just two of the top 10 are western cities, with Des Moines, Iowa and Oklahoma City at 18.7% and 17.2%, respectively.

Investor activity tends to be lowest in the West, although two East Coast markets and one Midwest market also had lower levels of activity. The five markets with the least amount of investor activity are all west of the Rockies, including Ventura, California, Boise, Idaho, Oakland, California, San Jose, California and Sacramento, California at 4.8%, 4.8%, 5.1%, 5.2% and 5.3%, respectively. The three non-western markets with lower activity include Elgin, Illinois, Frederick, Maryland and Worcester, Massachusetts at 5.4%, 5.6% and 5.9%, respectively.

Why are investors buying homes at high rates in some markets and lower rates in others? While there are several likely explanations, we found investors are attracted to markets where rents are relatively high compared to purchase prices. The inter-market variation in median cap rates - which is the ratio of annual rent collected on a property compared to its value - is highly correlated with the share of investor activity in a given market. Across our sample of the 100 largest markets between 2012 and 2018, the correlation is quite strong, with a Pearson's R of 0.55 for you stats nerds out there.

CoreLogic also reports that home investors are likely attracted to markets with high-cap rates because cap rates are simply a measure of return. For example, on an initial investment of $100,000, a property with a 10% cap rate will deliver an annual return of $10,000 in rent, and a property with a 2% cap rate will deliver $2,000. While there are certainly other considerations for investors, cap rates are simple but powerful indicators of market dynamics. Cap rates also reflect market-level risk and expectations in future home value increases, vacancy rates, tenant risk and physical conditions of properties. All things being equal, investors tend to prefer higher over lower returns, and those in the housing market are no different.

Additionally, CoreLogic found larger increases in investor activity from the housing market bottom (2012) to the most recent calendar year (2018) are also strongly correlated with tightening housing market conditions. Across the largest 100 markets, there is a moderate correlation (Pearson's R of 0.35) between the change in investor activity over these six years and the change in the absorption rate (the rate of sales divided the number of new listings) over the same period. In other words, markets that witnessed an increase in the share of active investors also experienced a similar change in the rate at which homes sold relative to inventory.

Does this mean investors snapped up supply that would have otherwise been bought by owner-occupiers? Maybe, but the evidence isn't conclusive because there's a possible chicken-or-egg relationship between the two. While it's certainly possible that an increase in investors into a market increases competition and lowers supply relative to aggregate demand, the opposite is also possible: markets with tightening supply could draw investors as they perceive markets with a dwindling supply to be safer bets than those with a more plentiful supply.

While CoreLogic found investor activity at an all-time high and concentrated in the lower end of the market, they can't definitively conclude this increase leads to excessive competition for owner-occupiers. This is because it's also possible investors are filling a void in markets where there is less owner-occupier demand. Maybe not so coincidentally, the places with the most investor activity - like Detroit, Philadelphia and Baltimore - had less demand and slower price growth in the latest economic expansion compared to regions with less investor activity and higher price growth, such as San Jose, Oakland and Ventura. Either way, it's a truism that homebuyers today are more likely to cross paths with investors during an open house than at any other time in the past two decades. 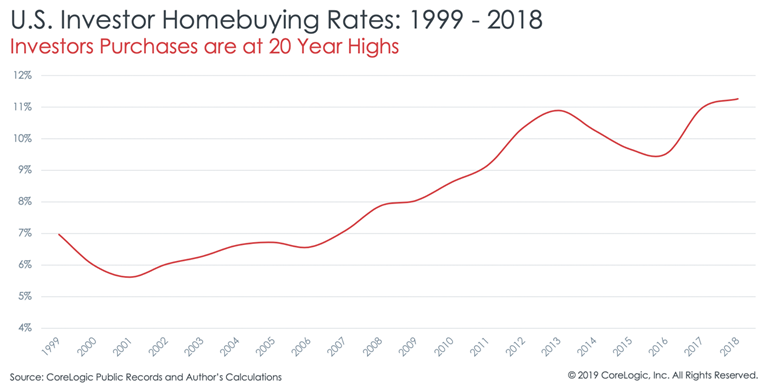 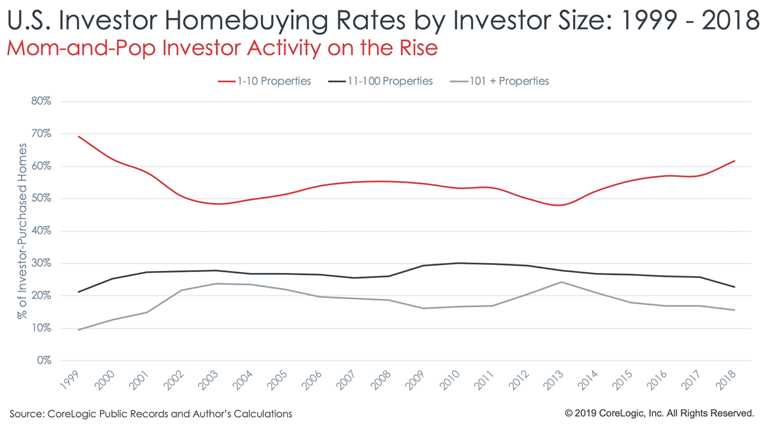 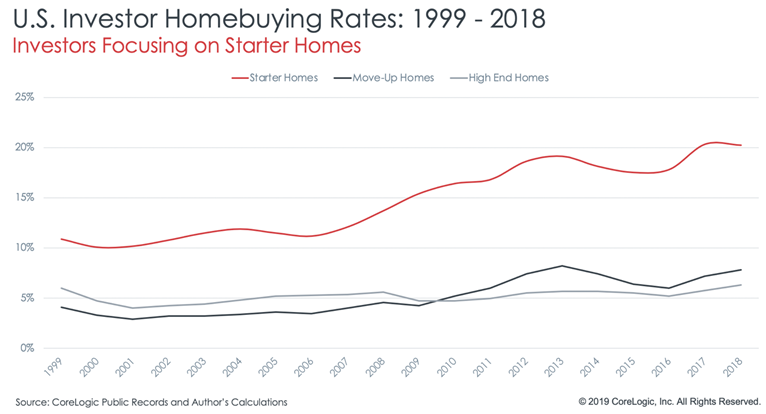 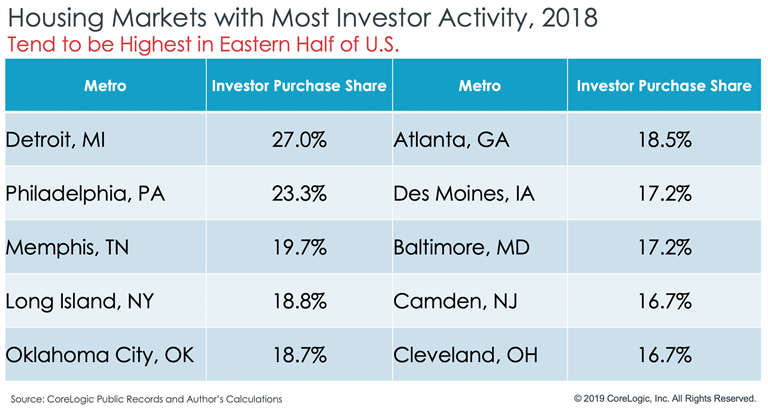 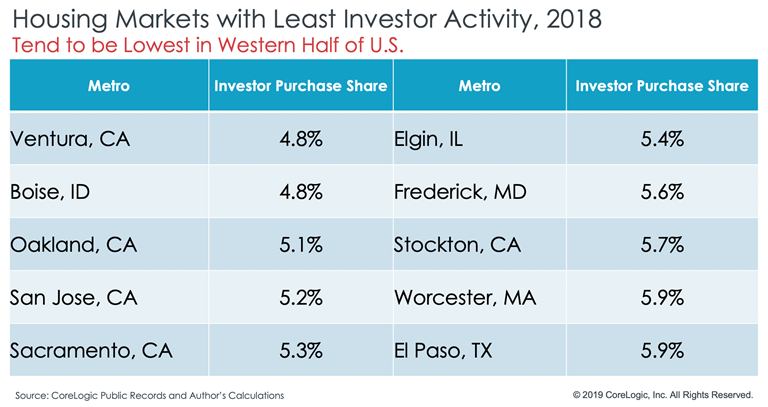 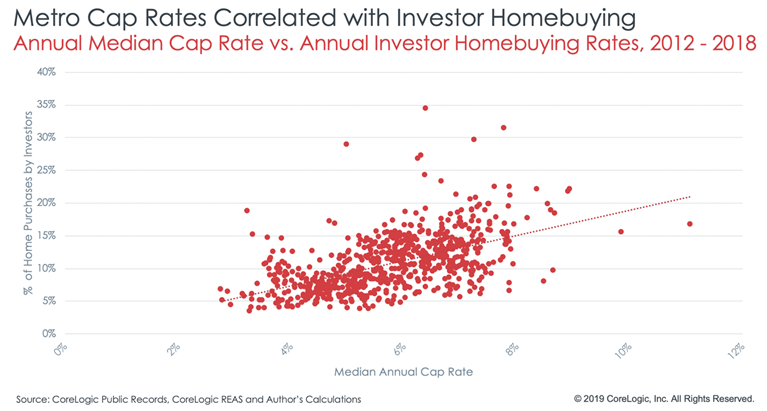 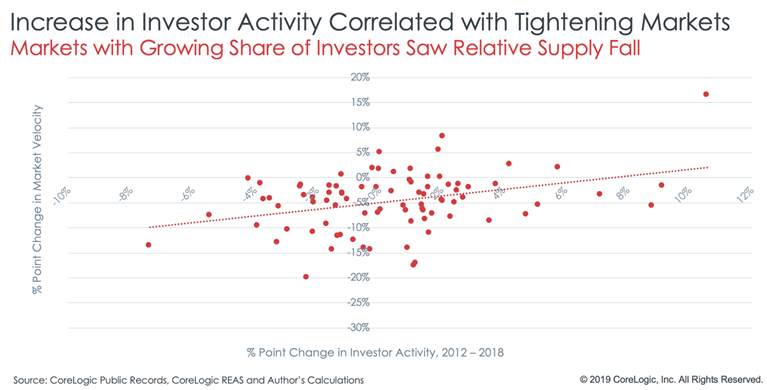