Yet Not a Housing Bubble Market Says Nationwide

According to a forward-looking housing barometer report released this week by Nationwide, U.S. home prices nationally have risen significantly since the 2008 mortgage crisis, but "healthy fundamentals" in the majority of local housing markets signify that another housing bubble isn't imminent.

Today's housing market remains positive and in stark contrast to the conditions during the housing bubble when more than three-fourths of metro areas flashed warning signs at least two years before the bubble popped, according to Nationwide's Health of Housing Markets Report (HoHM Report).

The latest HoHM Report finds that continued job growth, increasing incomes and record low mortgage rates across the U.S. are keeping housing affordable. Additionally, modestly tight mortgage underwriting criteria and a decided lack of overbuilding should support housing markets in the year ahead.  The report also shows that there are a handful of regional markets where house prices are more than 20 percent above their pre-crash peaks.

"Home prices reaching or even passing their pre-crash highs of a decade ago does not signal a bubble in the near future," said David Berson, Nationwide senior vice president and chief economist. "Even with record-high prices in some markets, housing remains relatively affordable, and we are not concerned about a national bubble."

Berson noted that only 7.1 percent of homeowners remain underwater on their mortgages and housing market metrics across the board remain healthy. "We're optimistic that the housing market will continue to boost the U.S. economy," he said.

The quarterly report evaluates the housing health for the U.S. and 400 metropolitan statistical areas. Overall, it indicates that the vast majority of local housing markets will experience sustainable housing activity during the next year with little chance of substantial downturns.

Incomes in six markets across the country, however, are not keeping pace with sharply rising home prices. They are Dallas, Houston and Austin, Texas; Denver, Colo.; and San Francisco and San Jose, Calif. Meanwhile, home prices in several metro areas that experienced the biggest increases in the housing boom remain more than 20 percent below their peak. They include Bakersfield and Fresno, Calif.; Las Vegas, Nev.; Orlando, Fla.; and Tucson and Phoenix, Ariz.

The report also found that: 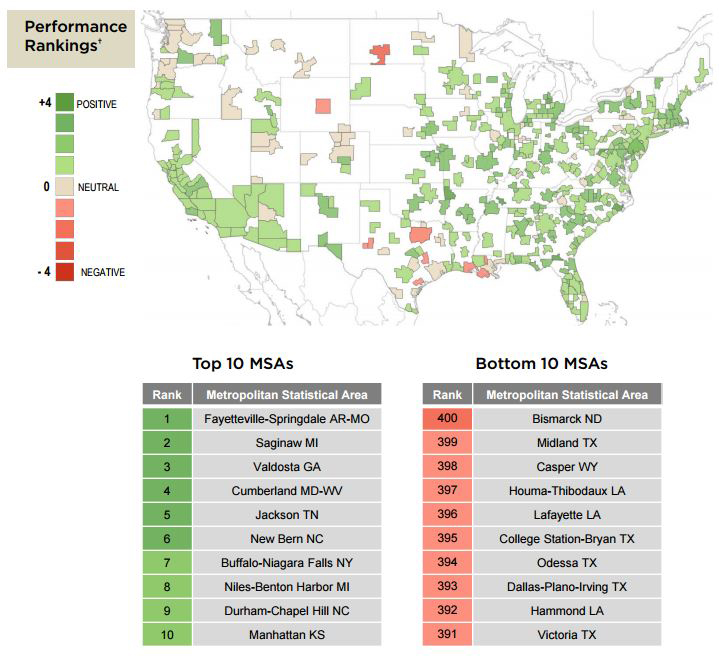