Half of U.S. Counties at Risk for Increased Rental Property Defaults in 2021

According to new research from RealtyTrac shows that single-family rental property owners in 48% of all U.S. counties are at above-average risk for default.

The RealtyTrac Rental Property Risk Report gauges the relative default risk of single-family rental homes, almost 90% of which are owned by mom-and-pop investors who own fewer than 10 properties. The financial impact of COVID-19, resulting job losses, and government-imposed eviction moratoria have all contributed to reduced on-time rental payments which, in turn, can lead to potential default among these smaller investors, many of whom are highly leveraged based on loan-to-value (LTV) ratio data. According to their research, the average risk score among the country's 3,143 counties is 50.2, with 1,514, or 48%, at above-average risk.

When looking at the largest 100 counties - based on the total number of properties - the average risk score is 43.6, with 53% at above-average risk. Among these large counties, Florida, New York, and California counties accounted for 44% of the 25 most at-risk counties. New York (Erie, Kings, Monroe, and New York Counties) and Florida (Collier, Lee, Polk, and Marion) each had four counties in the top 25 ranking, and California (Kern, Riverside, and San Bernardino) had three. Mohave County in Arizona was rated as the most at-risk of the 100 largest counties in the country.

"The job losses in a handful of severely impacted industries due to the COVID-19 recession have disproportionately affected renters," said Rick Sharga, RealtyTrac executive vice president. "Federal, state, and local governments have responded by enacting eviction bans to protect tenants, but in doing so have inadvertently put many landlords at risk. And the longer the eviction bans are in place, the higher the likelihood that these landlords are going to default on their mortgages, declare bankruptcy, or be forced to sell off properties at distressed pricing, which could have a negative impact on local housing markets."

Of the 100 largest counties, Mohave County in Arizona had the highest risk score at 77.2, due to a high percentage of rental properties (79%) and a higher-than-average unemployment rate (8.7%). Salt Lake County in Utah had the lowest risk score at 17.2, reflecting the county's relatively low percentage of single-family rental homes, low LTV ratios and low unemployment rate.

"While it's completely appropriate that the government has taken steps to protect tenants from eviction during a global pandemic, it's also completely unrealistic to assume that landlords can bear 100% of the financial burden of missed rent payments," Sharga noted. "There's a misperception that most landlords are corporations or institutional investors. The fact is that almost 90% of single-family rental landlords are smaller investors who own fewer than 10 properties, are often highly leveraged, and simply don't have the financial strength to weather this storm. And financial failure by these investors has implications for both their tenants and the communities where their rental properties are located."

Regionally, the Midwest has the highest number of large counties with above-average risk scores with 12, followed by the Northeast with 11, the Southeast with 10, the West with eight, and the South with six.

"Despite the pandemic, default activity is at its lowest level in decades, and the government and mortgage industry are working together to prevent unnecessary foreclosures and evictions," Sharga said. "But there needs to be a concerted effort to backstop the landlords as well, or numerous counties across the country are going to see rising levels of foreclosures on rental properties and needless financial distress." 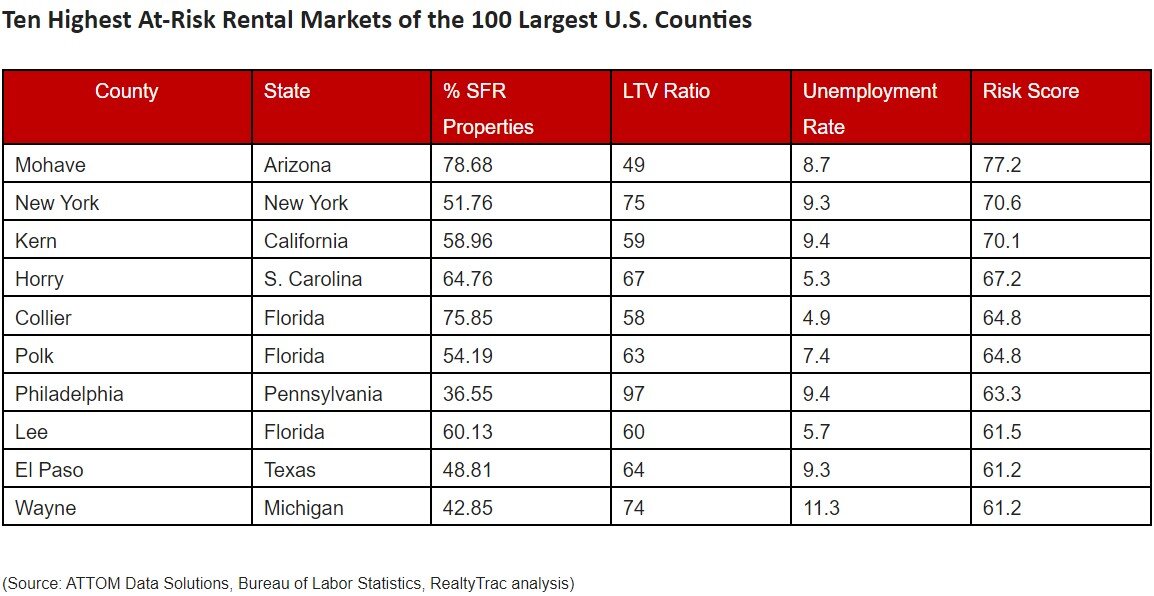